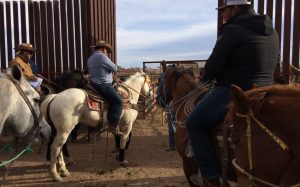 Harun Farocki Institut presents two evenings with films by the American filmmaker Cathy Lee Crane on the occasion of her current Harun Farocki Residency in Berlin, supported by the Goethe-Institut. Since 1994 Crane has crafted lyrical films of speculative history. She has also collaborated extensively with filmmakers, including Harun Farocki, with whom she researched and filmed for the installation and film project “Prison Images” in California.

The borderlands is a recurring theme in the Berlin presentation of Crane’s films with the international premiere of her feature-length documentary CROSSING COLUMBUS (2020) on July 27, and the screening of the short film TERRESTRIAL SEA (2022) as part of the collaborative film program (X)-trACTION on July 29. Both films build on Crane’s long standing historical investigation on the western boundary between the United States of Mexico and the United States of America, which also manifests in the ongoing multiple platform hybrid film series DRAWING THE LINE, one iteration of which will also be presented as a 14-channel installation from July 15-24 by the Harun Farocki Institut in an independent project space in Berlin-Wedding.

At the height of the Mexican Revolution, Pancho Villa raided Columbus, New Mexico. Every year, the town’s commemoration of the raid opens old wounds. This year (2018), Mexican riders on horseback (Cabalgata Binacional Villista) drive north through the Chihuahua desert with the grandson of Villa himself to donate Villa’s death mask. Richard Dean, the town’s self-proclaimed historian, finds the village enthusiasm for the Cabalgata “un-American.” The memorial he organizes for the Historical Society is also the anniversary of his grandfather’s murder by the Villistas. As the town grapples with the historical event that put Columbus on the map, it becomes clear that the very survival of this border town depends on it. The story of Columbus is as much about the past as it is the ritual of retelling and enacting it. After decades of repetition, this story has come to shape the town’s very identity.

In the context of current debates on immigration in North America, CROSSING COLUMBUS frames those controversies with the historical lens of the boundary itself; in particular, the history of crossing it.

The short documentary film ON THE LINE charts a trip around Baja California to the Tropic of Cancer line on the summer solstice. The film develops its narrative drive through the rhythm of shot length and composition. Aided by an original score from Beth Custer and a wicked sound design by Jeremiah Moore that utilizes sounds from the Cassini space probe, the piece takes on a humorously sinister tone; as if the historical marker were an alien landing.