This is the forty-fourth instalment of a collaborative effort by the Journal of Visual Culture and the Harun Farocki Institut, initiated by the COVID-19 crisis. The call sent to JVC’s editorial board, and a wide selection of previous contributors and members of its extended communities, described the task as follows: „There is a lot of spontaneous, ad hoc opinion-making and premature commentary around, as to be expected. However, the ethics and politics of artistic and theoretical practice to be pursued in this situation should oblige us to stay cautious and to intervene with care in the discussion. As one of JVC’s editors, Brooke Belisle, explains: ‚We are not looking for sensationalism, but rather, moments of reflection that: make connections between what’s happening now and the larger intellectual contexts that our readership shares; offer small ways to be reflective and to draw on tools we have and things we know instead of just feeling numb and overwhelmed; help serve as intellectual community for one another while we are isolated; support the work of being thoughtful and trying to find/make meaning…which is always a collective endeavour, even if we are forced to be apart.'“ TH

By Vladimir Miladinović and Stephenie Young

(S) A couple of years ago I was at the MIT Museum in Cambridge, Massachusetts with the artist Vladimir Miladinović where they were having a virtual reality exhibit about war and testimony. We thought we would take a look and try it out. We put on our large VR glasses and started moving through the virtual rooms of the exhibit. I had no idea where Vlada was because I was blind to the real world only able to see the shoes of the other blinded wanderers. Although it was taxing for me, I moved through the entire exhibit as best I could, roaming through this digital world of war. I obeyed the virtual orders of how to move my body through this world the best I could. At the end, exhausted, I took off my huge glasses and found Vlada standing in the corner of the room. Having failed to follow the digital narrative, walking through the virtual walls and the like, he had taken off his own glasses and had been watching me walk around in circles. We noticed that we were both nauseous. The disparity between the movement and wearing the digital glasses had literally made us sick. We left the museum and its digital world and drove across the Charles River to the Boston Museum of Fine Arts to look at “real” paintings.

Digital: From the Latin “digitus” meaning “finger or “toe.” relating to, using, or storing data or information in the form of digital signals; involving or relating to the use of computer technology; „the digital revolution.“

(S) With Covid comes a world of deep-seated anxiety and this is surely connected to the fact that our world has not only become more virtual than even, but in a Sartrean kind of fashion, there seems to be no exit, no alternative. At this moment when we spend so much time in front of our computers, we have to reconsider how to deal with many of our usual habits and this includes the news. We have this insane news coming at us everyday day. We see it. It comes to us. And we can’t depend on our eyes anymore.

(S) Vladimir Miladinović usually works with paper archives but now, as with everyone else, he has turned to the digital instead of the physical world for his source material. And what he has found is the opposite of the thoughtful research that he usually draws from. Of course, he wasn’t exactly searching for these memes—they were just popping up everywhere—his computer, his phone, and he found that they represent the things that are happening now. Thus, he started painting his “screen shots series.” A small series of watercolors about the relationship between social networking and the foreign media. He has become an unwilling recipient and therefore reluctant collector of these little fake news articles. A mere screen shot collector.

Meme: 1970s. From Greek mimēma ‘that which is imitated’, on the pattern of gene. An idea, behavior or style that spreads from person to person within a culture. To imitate; an intended echo. An image or snippet of video or text considered witty or incisive that is spread widely and rapidly by internet users.

(S) What he has painted are anecdotal texts. Mere screen shots. Memes. They are the opposite of archives, or perhaps they are a new kind of archive. As one French philosopher wrote: “The archive. If we want to know what that will have meant we will only know in times to come. Not tomorrow, but in times to come.  Later on, or perhaps never.” The new archive consists of a series of bytes of information. Just an image and a headline. What you see on the screen gives you three to five seconds to make an opinion, to do a “reading.” To make an opinion. There is a crisis of knowledge, of information, of reflection and analysis. News is supporting this crisis. Without this news it would have been different.

Influenza: 1504. Medieval Latin “influential” in the astrological sense; visitation or influence of the stars; astral, occult or atmospheric influence. 1743: Italian meaning disease; a plague has broken out which destroys a large number of people; they call it Influenza. 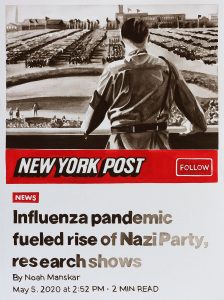 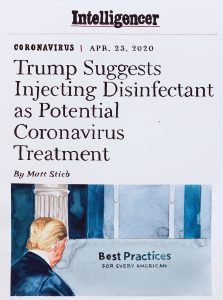 (V) One typical afternoon during a terrible lockdown in a small city in central Serbia:

“Trump Suggests Injecting Disinfectant as Potential Coronavirus Treatment” Seriously? This pandemic is less problematic than the world leaders we have today. Did he really say that? And what is this “Intelligencer” in the first place? I should look up more sources online; I doubt any normal person would say something like this. Wait?! Look at this one: “Drink Vodka to Beat Coronavirus” Man! This is insane, no way this is real, must be another clickbait, this portal must make a lot of money! It would feel good to take a shot of Vodka though, I feel anxious! Or something stronger . . . “France Had to Tell Citizens That Cocaine Won’t Cure Coronavirus” I totally get this, I will keep this one for sure, it even looks nice. I should do something with these screenshots. I already have hundreds! Oh, “Medical Experts Denounce Trump’s Latest ‘Dangerous’ treatment suggestion”, so he did say that, it’s in The Guardian, so it must be true?! But why is it dangerous and why is dangerous in quotation marks? I don’t get it, this is so confusing. “A Man Drank a Bottle of Rubbing Alcohol for Covid-19”, poor guy, but what are these websites? “MedPage Today”, who knows if this really happened. Do people really take instructions from these obscure online sources? Probably yes! 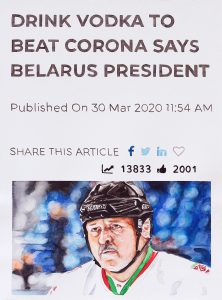 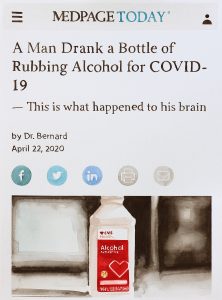 (V) I just remembered a story about some terrible revenge that took place somewhere in the Bosnian warzone in ‘92. Soldiers tortured a doctor who was imprisoned in a camp because they read in local papers that he was baking kids in the oven. The power of media indeed! I can only imagine the chaotic aftermath produced by this content. So, a crisis produces content that produces more crises; it’s a capitalist Perpetuum Mobile. And I am a perfect consumer! “This Pandemic is Nothing Compared to What Climate Change Has in Store”, finally someone wrote about it! I don’t know why, but this has calmed me down a bit. I think I’m hungry! “Belgians Urged to Eat Fries Twice a Week as Coronavirus Creates Massive Potato Surplus” A potato surplus? What the hell? I should stop looking at this! I’ll keep this one too! 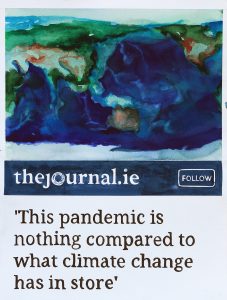 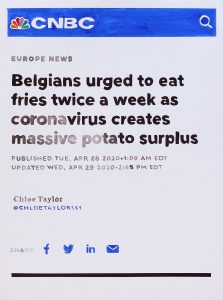 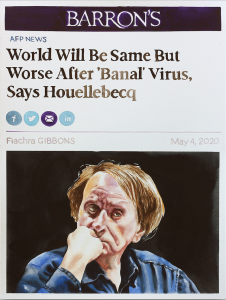 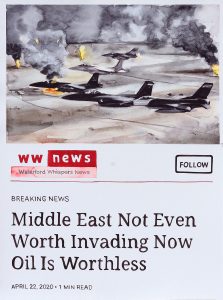 (S&V) And the news keeps getting crazier, which creates the perfect situation for an even greater support of capitalist ideology. It tells you: don’t even try to think outside of capitalism. Don’t even try to think of alternative political realities. The production of knowledge is now based on these obscure websites that are creating knowledge—opinions—and ultimately misinterpretations—fake news. That is, the production of knowledge, fake news, has no source, no center. There is no author. Like capitalist ideology, the dissemination of this material is everywhere, and this very fast news is easy to perceive and easy to form a quick opinion about.

(S&V) The meme has no source, like capitalism. It has no roots. It has no trace. Yet, it is our present and our future. The question then becomes: Does a third way exist? Or is this Capitalist logic one that tells us that there is no alternative, and we continue to believe this. It says: be creative to make things nicer but do not be too creative—do not think outside of capitalism or else the fragile world that we have all worked so hard to create, a mere façade it seems, will fall apart and only immense anxiety will remain. Our world is connected. We only have a digital world. We are limited to contact with a small amount of people. We cannot meet anyone now. It is nearly impossible to make new contacts and the world is now made up of bubbles, clusters.

Bubble: 2020: unofficial term used to describe the cluster of people outside your household with whom you feel comfortable spending time during the pandemic.

The world is closed, insulated. There is no exit. It’s a Sartrean crisis.

Stephenie Young is a professor at Salem State University in Massachusetts. She holds a PhD in comparative literature and translation studies from the State University of New York, Binghamton and has also studied the practice of photography at the Academy of Art in San Francisco. Her forthcoming book, The Forensics of Memorialization, traces a trajectory of visual culture in (former) Yugoslavia since the 1960s with a focus on how traumatic material culture is used by artists to shape memory politics in the region

Vladimir Miladinović is an artist whose main interests lie with the politics of remembering, media manipulation and the creation and reinterpretation of history. His work engages with war and post-war trauma. His most recent work “The Notebook” is a work based on Ratko Mladić’s war diary – a document that was used as evidence in his trial before the International Criminal Tribunal for the Former Yugoslavia (ICTY) in The Hague. Lives and works in Belgrade.