Newsreel shreds: two postcards from the summer of 2020 (Journal of Visual Culture & HaFI, 43)

This is the forty-third instalment of a collaborative effort by the Journal of Visual Culture and the Harun Farocki Institut, initiated by the COVID-19 crisis. The call sent to JVC’s editorial board, and a wide selection of previous contributors and members of its extended communities, described the task as follows: „There is a lot of spontaneous, ad hoc opinion-making and premature commentary around, as to be expected. However, the ethics and politics of artistic and theoretical practice to be pursued in this situation should oblige us to stay cautious and to intervene with care in the discussion. As one of JVC’s editors, Brooke Belisle, explains: ‚We are not looking for sensationalism, but rather, moments of reflection that: make connections between what’s happening now and the larger intellectual contexts that our readership shares; offer small ways to be reflective and to draw on tools we have and things we know instead of just feeling numb and overwhelmed; help serve as intellectual community for one another while we are isolated; support the work of being thoughtful and trying to find/make meaning…which is always a collective endeavour, even if we are forced to be apart.'“ TH

Newsreel Shreds: Two Postcards from the Summer of 2020

At the air distance of 140 km from Italy, 130 km from Austria and 40 km from Slovenia, there is a small place that is the site of unimaginable human suffering, which no longer interests anyone. A place separated from the EU by a dense forest and hills. They call it the forest of darkness. The forest in which “to be seen” can be fatal and “remaining invisible” can mean a chance.
The refugees call this part of their journey ‘game’. The images of the game on their phones are always deleted by the police.
In the middle of a field, in a makeshift shelter made out of plastic bags and fallen branches, a group of young people, no older than 20, are zealously gathering their things and filling their backpacks. For the third time, they count the number of T-shirts, socks, bottles of water and cans of food that they will take on their journey. Someone has cooked a few kilograms of rice, which they carefully put into bags. They talk about what the best time to set off is.
So far, they have walked almost 7000 km, some from Jammu, some from the Kashmir Valley, and some from Afghanistan. 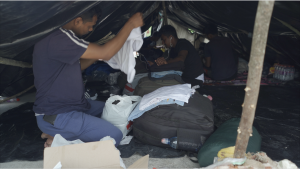 Only a few kilometres separate them from the EU border. Compared to the distance from their home, Germany seems to be around the corner. Moseeben says: “I have my parents, my sisters and brothers. I’ll work in Germany for a few years and send them money, then I might return home, but I’d prefer to see us all together in Europe. I don’t tell them how it is here. If the forests could speak, they’d dry out from sadness.”
The journey through the forest takes between ten and fifteen days and costs at least 100 euros every time. They are embarking on the game for the ninth time, some even the twentieth. Abid quietly bows his head and murmurs: “For every game, you need new shoes, a backpack, a telephone, an additional battery, food and a sleeping bag.”
The game is an exercise in hiding from the gaze of others. Zeeshan smiles: “The game on TV is Tom and Jerry, the game in the EU is refugees and the police.” 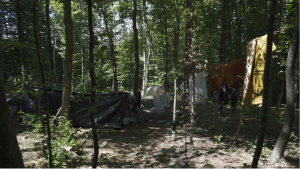 In reality, the game means fifteen days of walking, running, climbing and swimming across difficult terrain, the lack of water and food, exhaustion and hunger, innumerable falls, sprains and also breaks, the danger of forest animals and, without exception, infected wounds on the soles and feet.
It also means avoiding the police, hunters, local militias and the locals.
Avoiding getting caught and beaten, avoiding the police stealing your money, shoes, clothes, food and phone, and avoiding being shot at. A journey on which you have to remain invisible.
Those that get through to the other side delete the photos of the forest.

I have been asking her for a few days: “Tell me how it was when you came to Germany. Did you miss home? Did you understand any words? Did anyone curse at you? What did you do? Was it hard to find a job? How much did you make? Did you have any friends? Did you travel a long time? What was the journey like?”
Metka opens a closet and says: “Look, here are some photos and films. Nobody has looked at them for several decades. You’ll find the answers here. Today, we’ll have an evening of memories.” 1348 slides marked with the year, meticulously archived with technical writing; 1967, 1968, 1969 etc. The years that unintentionally call to mind the turbulent political and civil society movements. Perhaps not as visibly, loudly or bombastically, those years determined, changed and forever marked the numerous lives of unknown individuals, workers from the southern part of Europe and North Africa.
When, under the 1950s Gastarbeiterprogramm, Germany welcomed the arrival of the temporary workforce from Italy, Spain, Greece, Turkey, Morocco, Portugal, Tunisia and, last but not least, in 1968, also Yugoslavia, Metka found herself in the sorting department of a garment factory in Viernheim.

We turn on the projector.

Dusty memories from the past, older than 50 years, take shape on the living room wall. We watch a series of images portraying everyday life, carefully framed, mostly showing leisure activities and pleasant socialising. Nowhere an image recording the fragmented experience of the thousands of people who, having been promised temporary and better work, left their loved ones and their home forever. Photos torn out of the pleasant and nice experiences fifty years later and fragments impressed on celluloid tape resist and persistently keep silent.
Finally, an image of a packed car appears on the wall. In her most beautiful dress, Metka stands in front of it. With an almost photographic memory, she recites: “This was on the day we left. Before we set off, we took this photo. My mother prepared food for us – fried chicken, which we ate at the border crossing. I took with me everything we could put in the car boot. It wasn’t much. Bed linen, Ivačič’s cookbook, Prešeren, a few music records, some clothes, cutlery, dishes and that was that. Look, here we also took a photo while on the road. This was a view of the Alps in Austria, and the Autobahn in Germany…”
But the photos of the packed car and the photos from the journey also do not say much.
Around an hour later, it is time for Kaffee und Kuchen. Metka neatly sets the table, makes coffee and carefully puts a freshly baked apple pie, made according to Ivačič’s recipe, on the table. Soon after, we are joined by Mortaza, Sogra and Koza. They bring tea. German filtered coffee, Yugoslav apple pie and Afghan tea.
Encouraged by the old photos, Metka puts an old map on the table and the comparison of the two journeys begins. Mortaza, Sogra and Metka compare the length of the journey, the hours of driving, the countries they crossed, the things they took with them.

She from Yugoslavia, they from Afghanistan.

A shot of living memory.

A monument to travellers. 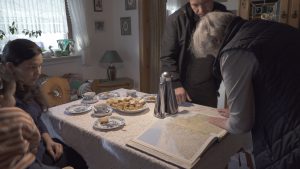 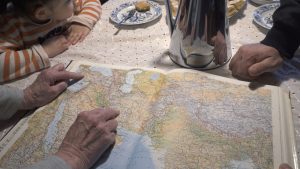 A sequence of memory joining the past that fills the present and shows the potential possibility of the future. The future that means being together. Not tomorrow, but today and here. Metka, Mortaza and Soghra, all under the same roof, travellers at a different time and from different places, arouse the feeling of all that cannot be found in the archival footage. The experience of the past that opens the possibility for a tomorrow.

Nika Autor is a visual artist. Her practice is based on experimental and documentary films, film essays, photography, collages, drawings and spatial video installations. The focus of her work is a research of the politics of memory dealing with concealed topics of the forgotten past and the silenced present, entailing particular images, specific constructions of collective memory as well as personal/oral narratives. She is part of the collective Newsreel Front.