This is the thirty-fourth instalment of a collaborative effort by the Journal of Visual Culture and the Harun Farocki Institut, initiated by the COVID-19 crisis. The call sent to JVC’s editorial board, and a wide selection of previous contributors and members of its extended communities, described the task as follows: „There is a lot of spontaneous, ad hoc opinion-making and premature commentary around, as to be expected. However, the ethics and politics of artistic and theoretical practice to be pursued in this situation should oblige us to stay cautious and to intervene with care in the discussion. As one of JVC’s editors, Brooke Belisle, explains: ‚We are not looking for sensationalism, but rather, moments of reflection that: make connections between what’s happening now and the larger intellectual contexts that our readership shares; offer small ways to be reflective and to draw on tools we have and things we know instead of just feeling numb and overwhelmed; help serve as intellectual community for one another while we are isolated; support the work of being thoughtful and trying to find/make meaning…which is always a collective endeavour, even if we are forced to be apart.'“ TH 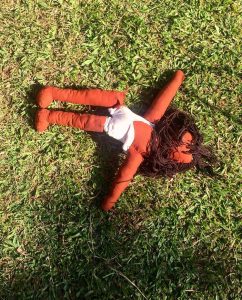 Hello, my name is Janine Francois. I would like to say thank you to the organisers of #stophatrednow2020 for putting together the event and for inviting me to contribute. I know we will be discussing pressing and emergent topics presented by an amazing and eclectic mix of womxn, femmes and people of various gender identities and non-genders. These contributors will be sharing with us their knowledge(s), expertise, practices and thoughts that question the intersections between creativity, climate justice, and ecology.

I have aptly named my talk ‘ecologies of care’, a term rooted in how we think about our relationship to our physical and material world but also the metaphysics of care. How do we see each other’s bodies, identities, histories and knowledge(s) as constellations of lived experiences intersecting across the globe that are both unique and individual but also underpinned by the traumas of colonialism and resistance and uprising? In various ways we are all concerned with our positionalities in these dire times, we also know that our histories and positionalities provide the privileged amongst us with more access to resources. So what does it mean to create or curate ‘ecologies of care’? How do we care for each other as people with bodies that are loved but also marked with pain and trauma? And how do we care for our existences and knowledge(s)?

I am speaking from my heart, it is an unscripted speech, so please bear with my thought processes, lapses and utterances. The issue of climate injustice is an injustice to Black, Brown and Indigenous people, who are disproportionately affected by climate change caused by 500 years of white-western-imperialism. We can think about climate change as a very contemporary phenomenon or we can locate it via colonialism. We can then locate the same relationship to Covid-19, in how bodies of Colour in the Global South and North are disproportionately affected by a disease due to discriminatory systemic practices These two issues are not separate, they are connected in how Black, Brown and Indigenous bodies marked by gender, class and sexuality and other indicators of underprivilege are affected by our lack of access to resources and care. Covid-19 is a climate issue. I come back to the question of how do we create ‘ecologies of care’. How do we work against structures, systems, institutions, policies, laws and practices that affect so many of us who are oppressed and marginalised? How do we create our own systems of care founded on resistance and futurity, that operate beyond the limitations of capitalism? How do we gain access to our world? How do we gain access to safe growing food? And even in the so-called Global North, Black people in Detroit still do not even have access to safe drinking water, a supposed basic human right. Environmental racism is a climate issue.

‘Ecologies of care’ is not only a framework for us to work or think beyond the scope of white supremacy (many of us are already doing this); but to think about ourselves as constellations, that intersect across different continents and timezones, different histories and lived experiences and that we are all rooted in particular practices of care; which not only concerns our own bodies or lives, but also the care of others and the various beings and entities we interact with from animals to water to plants to the spiritual. We are all united in how we have been traumatised by white supremacist-colonial-capitalist violence, and working towards ‘ecologies of care’ in light of these traumas is not only a dismantling of these systems (decolonising?); it is also generating a new praxis that reminds us that our bodies are sites of knowledge(s) and that they require love, care and intimacy. In these bodies we are growing on a daily basis new ways of existing, acting and demanding, and in doing so we conjure a new magic that changes how we talk and respond to one another and how we want to be held (or not) and how this all culminates in a radical love ethic to quote aunty bell hooks. bell hooks urges us to create a radical love ethic that is inherently anti patriarchal, white supremacist and capitalist, departing from the conditions of scarcity and embracing conditions of abundance. A radical love ethic knows there is always enough resources to be redistributed, even though oppressive systems might tell us otherwise… there is always enough! There is an abundance of resources that can be equitably shared with the most marginalised and oppressed amongst us. The psychology of finite resources can only exist under the conditions of oppression, so let’s burn down the master’s house and its tools.

I am now ending with a provocation of how we enact an ‘ecologies of care’ that is anti-human. ‘Ecologies of care’ dismantles the notion of the ‘human’ whose ideologies is rooted in white supremacist-capitalist-patriarchy (aka the enlightenment) and maintains hierarchies of humanness attributed to whiteness, maleness, straightness, cisness, able bodies, westernness, citizened, thinness and the monied. Working towards ‘ecologies of care’ is embracing the contradictions of the non-language, the intangible, the entangled, the messy, the unruly, the unarticulated, and the ‘ugly’, and embracing processes that are experiential, unevidenced and spiritual. I would like to offer these thoughts to #stophatrednow2020 as the starting point by which we practice ‘ecologies of care’ in real life, digitally, and personally.

[1] This text is an adaptation of my talk, ‘ecologies of care’ given at the #StopHatredNow online festival organised by Urban Apa, on May 14 2020.

NB: I would like to acknowledge that the phrase ‘ecology of care’ is also an arts based initiative founded by Ria Hartley focusing on supporting disabled and non-neurotypical artists with access needs. I wrote and titled this speech before my discovery.

Janine Francois is a Black-Feminist Cultural Producer and Lecturer at University of the Arts London. Her practices centre women/femmes of colour by establishing ‘safe(r)’ spaces sites of resistance, disruption and co-production. Janine is a Collaborative Partnership Doctoral student researching, ‘if Tate can be a ‘safe(r) space to discuss race and cultural difference within a teaching and learning context’ at Tate and University of Bedfordshire. She is interested in (re)production of dominance, ethics of care, and the cultural politics of emotions, as Sara Ahmed calls it in her book of the same name (Edinburgh University Press, 2014). In 2020, Francois was named one of the UK’s top 100 BAME Climate Change activists by Climate Reframe. You can follow her thoughts via twitter: @itsjaninebtw or her blog: itsjaninebtw.com