[Online Event Series]: All the Missing Limbs of a Pre/oposition, February 22, 2022 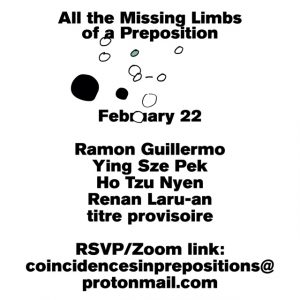 Ramon Guillermo
Relationsbegriffe (Connecting Concepts): Walter Benjamin’s “On the Task of the Translator” in Filipino Translation

Walter Benjamin’s essay on translation entitled The Task of the Translator (Die Aufgabe des Übersetzers) (1923) is reputedly one of the most difficult texts to translate from German into any other language. This text on translation has thus ironically spawned a discourse on its mistranslation. However, it is not perhaps Benjamin’s language which is the main source of difficulty but his supremely enigmatic formulations. This discussion will share some translator’s notes on the experience and challenges of translating this difficult text from German to Filipino.

The event is also on Facebook and Instagram. One more Zoom event will take place in March 2022.

The project is realized in partnership with the Harun Farocki Institut, Philippine Contemporary Art Network (PCAN), and the UP Vargas Museum. Supported by Goethe-Institut.