HaFI is cooperation partner of the second edition of the upcoming three-day event Radical Film Network Meeting taking place from October 7-10, 2021, in silent green, Berlin. We would like to draw your attention to the Open Call for the book project “Radical Film at the Dawn of a New Society,” which deadline has been now extended to February 15, 2021. 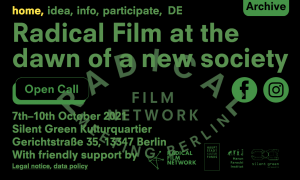 You are invited to make a contribution to a new book arising from the Radical Film Network Meeting Berlin (RFNMB). Under the working title “Radical Film at the Dawn of a New Society”, the book aims to critically interrogate how various actors working at the intersection of radical film, art and digital culture are engaging with issues of our present time shaped by changes and disruptions of seismic proportions.

The events of the year 2020 have fundamentally transformed public life almost beyond recognition. It remains to be seen if these transformations are here to stay or just a passing phase. These events and many of the transformations they have given rise to have fostered a surge of anxiety, feelings of powerlessness and a dark vision of the future. However, if we take a second look at the current situation, we can also see a newly developed focus on the importance of community, of solidarity and on maintaining sociality, all of which hold the promise of a new society. And while anxiety is often said to embody paralyzing features, one could argue that anxiety — a basic human emotion like joy, lust and anger — is a strong motive for collective human action because nobody wants to stay alone in the dark.

We propose to overcome the anxiety together and to collectively develop productive solutions to reclaim control. We are seeking contributions which investigate the possibilities of radical film cultures to regain agency and to offer productive ways out of the current bleakness. How can this state of affairs be aesthetically translated into new forms of radical film or cinema? We welcome contributions from individuals and communities both inside and outside of academia, in particular, from activists, artists, filmmakers, policymakers and researchers. Contributions can either capture entirely new work or engage with past work taking a new perspective. They can take the form of any of, but not limited to, the following formats: academic papers, interviews, essays, photo stories, poems, short stories, diaries, codings or drawings or even memes.

More information on publisher, contributions to the event RFMNB in Berlin, and the RFMNB team, please consult the website: