The digital classroom and the digital studio (Journal of Visual Culture & HaFI, 32)

This is the thirty-second instalment of a collaborative effort by the Journal of Visual Culture and the Harun Farocki Institut, initiated by the COVID-19 crisis. The call sent to JVC’s editorial board, and a wide selection of previous contributors and members of its extended communities, described the task as follows: “There is a lot of spontaneous, ad hoc opinion-making and premature commentary around, as to be expected. However, the ethics and politics of artistic and theoretical practice to be pursued in this situation should oblige us to stay cautious and to intervene with care in the discussion. As one of JVC’s editors, Brooke Belisle, explains: ‘We are not looking for sensationalism, but rather, moments of reflection that: make connections between what’s happening now and the larger intellectual contexts that our readership shares; offer small ways to be reflective and to draw on tools we have and things we know instead of just feeling numb and overwhelmed; help serve as intellectual community for one another while we are isolated; support the work of being thoughtful and trying to find/make meaning…which is always a collective endeavour, even if we are forced to be apart.'” TH 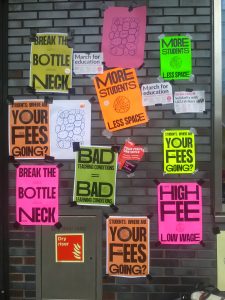 Recently, my colleagues and comrades Pil & Galia Kollectiv contributed a piece to this series about how the Covid-19 crisis means ‘Art will now emerge from bedrooms, quarantined hotel rooms and parks as a default rather than as the consequence of failure to attain the historical conditions of studio practice or by vanguard choice.’ Pil teaches with me at the Royal College of Art, and was on the picket line with me in March, just before the UK began its fatally belated lockdown, striking against the consequences of neoliberalism in the art school: casualisation of labour, unsafe workloads, falling pay, and pay gaps relating to ethnicity and gender. One of the things we discussed, stood outside in the freezing cold, was the possibility of the institution forcing staff and students to move to online learning and how much that might diminish not just our employment rights but our pedagogical horizons. Before the strike even ended, the pandemic forced the issue: we might not yet have been asked to record lectures that can be paid for once but recycled endlessly, but we have been forced to teach students whose bedrooms are now their studios, running tutorials and seminar groups via Skype or Zoom. What have been the pitfalls, and have there been potentialities?

After a brief moment of optimism that the crisis might bring about the end of the UK’s heavily mediatised Culture War politics, if not the collapse of capitalism, it now seems that the post-Covid 19 world will probably be as Michel Houellebecq asserted: “the same but worse”. In the shadow of that crushing election defeat in December, ending our hopes of a Labour government that would address the catastrophic state of British arts education, the main issues behind the strike – the precarity for teachers and exploitation of students – have already been exacerbated. Art schools are laying off tutors on fixed-term contracts, with the fate of visiting lecturers (who are effectively on zero-hour contracts) still unclear; the RCA have unconditionally suspended fifty of 190 students who withheld their tuition fees ‘in response to the RCA’s handling of the outbreak of Coronavirus, their inaction on the UCU strikes at the beginning of the year, and their decision to move all learning online without consulting the student body’. (The RCA have even threatened to report non-paying international students to the Home Office.) Several of my Skype tutorials have been spent encouraging students not to quit – not always unsuccessfully – as they struggle to adapt to losing their studios and being expected to adjust their practice for a digital degree show, without any reduction in their exorbitant fees.

For the students, losing their Crit sessions, where a group take it in turns to assess each other’s work, moving between studios as they go, has been tough, losing that point where individual creativity and community collaboration meet. The conditions best suit those making work that can most easily be shared online – moving image, or text – and the most rewarding points of these traduced conditions have been the seminars I’ve done with Critical Writing MA students. Using Zoom, I ran three classes on identity, the first covering transgender writing, the second looking at patriotism, and the third exploring the links between colonialism, anti-immigrant rhetoric and government policy. The patriotism class was the most interesting, partly because the students hadn’t often been encouraged to think of patriotism (and especially Englishness) as a form of identity politics, but also because the conversation took place in a space that was global: here and in my tutorials, students called in from Europe, Asia and Australia, but given the lockdown, all were kind of nowhere places, the distinctions between them blurring into the little boxes that lit up whenever someone interjected. In a sense, this is exciting, introducing a new kind of equality between the participants, with interesting implications for the national identity politics being discussed. But what is lost is the creative and personal development that comes with moving to a different country: being immersed in a foreign culture brings about a perspective shift both for the individual who moves, but also for those they meet, and these exchanges cannot be replicated online.

In an interview I did for my podcast Suite (212) – another thing moved from a studio to Skype in lockdown – Oreet Ashery talked about the impact of Covid-19 on Ruskin students, and how the digital shift has benefitted (or at least not actively de-privileged for a change) people with disabilities, or those who aren’t privileged enough to be able to relocate like the RCA’s many international students, and how a blend of physical and digital learning is likely in future. On the face of it, this seems positive – despite the extra work this will engender for tutors, unlikely to be paid more for it. In a country in which everything that can be has been privatised, and in which every last penny has been squeezed out of students (especially international ones, who are the least likely to return for the first post-pandemic academic year), the further corporate/tech takeover of higher education is a huge concern. For such a development to be good, it really needed to happen after a revolution in the ideological climate – the one we were trying to bring about in December. For the art school to survive, let alone thrive, in the future that Houellebecq predicts, we will have to adjust not only our tactics for working and teaching, but also for industrial action.

Juliet Jacques (b. Redhill, Surrey, 1981) is a writer and filmmaker based in London. She has published two books, most recently Trans: A Memoir (Verso, 2015). Her short fiction and essays have been included in several anthologies; her journalism and criticism has been published in Granta, Sight & Sound, Frieze, The Guardian, The London Review of Books and many other places. She has made four short films, one with artist Ker Wallwork, which have screened in galleries and festivals across the world.