We’ve been preparing for this our whole lives (Journal of Visual Culture & HaFI, 9)

This is the ninth instalment of a collaborative effort by the Journal of Visual Culture and the Harun Farocki Institut, initiated by the COVID-19 crisis. The call sent to JVC’s editorial board, and a wide selection of previous contributors and members of its extended communities, described the task as follows: “There is a lot of spontaneous, ad hoc opinion-making and premature commentary around, as to be expected. However, the ethics and politics of artistic and theoretical practice to be pursued in this situation should oblige us to stay cautious and to intervene with care in the discussion. As one of JVC’s editors, Brooke Belisle, explains: ‘We are not looking for sensationalism, but rather, moments of reflection that: make connections between what’s happening now and the larger intellectual contexts that our readership shares; offer small ways to be reflective and to draw on tools we have and things we know instead of just feeling numb and overwhelmed; help serve as intellectual community for one another while we are isolated; support the work of being thoughtful and trying to find/make meaning…which is always a collective endeavour, even if we are forced to be apart.'” TH 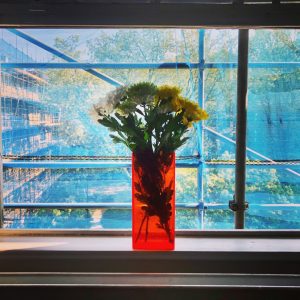 We’ve been preparing for this our whole lives

🤞Knowing that belonging is everything, particularly when out of reach and in pieces

that serve our recovery daily and exist for decades

🤞Living in a constant state of productive grief

🤞Practising gratitude within and outside the remits of privilege

🤞Sharing affinities and solidarity with service workers for as long as we can remember, we don’t survive without them, and celebrities are nothing but a good distraction from co-dependency

🤞Loving friends and chosen families actively, according to myth we chose our biological family too

🤞Acknowledging that how we die is how we live only more so, and owing that lineage to Palestinian solidarity movements and Black Lives Matter and queer deaths

🤞Sickening by extraction capitalism in the body

🤞Sustaining stillness for parts of the action

🤞Making work about withdrawal out of necessity, soft resistance

🤞Researching Crip theories, politicised self-care and survivance (survival + resistance), written by younger. Refining our politics to a tooth while remaining open to change our minds

🤞Taking things for granted was never an option, that’s for normal

We, survivors, were born for this crisis