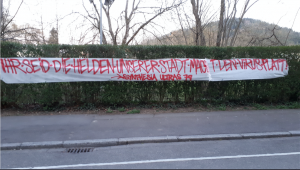 Banner by Synthesia Ultras 79, across the road of Loretto hospital, Freiburg, May 2020 (photo: Ulrich Bröckling)

Bad times are good times for heroic tales. They always boom when everyday life is disrupted, and special demands are made of the general public. The more piercingly the crisis sirens howl, the greater the hunger for dedicated emergency workers, determined people of action and indomitable freedom fighters. Their selfless commitment confirms the seriousness of the situation, but also guarantees an assurance that in the end things will turn out well. They serve both the longing to abide by an authority at the moment of danger and the rebellious dream of not bowing to any authority. Heroic tales set out to spur people on to follow in the footsteps of their role models, but respectful homage to their great deeds also dispenses them of the burden of leaving their comfort zone. And naturally it is a great deal more cost-effective to elect everyday heroes than to provide fair and adequate remuneration for the heroic deeds.

It was therefore to be expected that the corona pandemic would give rise to a heroic boom, at the latest within a few days after society was put into lockdown in mid-March. Such beginnings were already in the making with reports of Chinese ophthalmologist Li Wenliang, who early on had warned of the pathogen, for which he had been reprimanded by the police, and was to die not long after of a Covid-19 infection. Initially celebrated on social media as a courageous whistleblower, blowing the lid open on the Chinese government’s cover-up policy; since his death Chinese authorities have now appropriated him as an outstanding personality in the fight against the virus. Another example being Elena Pagliarini, an emergency room nurse in Cremona, Northern Italy, whose photo, collapsed in exhaustion at her desk, went viral.

In Germany, too, medical personnel were at the center of a Corona hero cult that spread rapidly. In the horrific pictures of overcrowded intensive care units, fears associated with the pandemic intensified, and the otherwise invisible threat became tangible. Those who served in these places were forced to perform heroic deeds involved directly, as they were, with the life-and-death struggle and being exposed to an increased risk of infection. The frequent lack of protective masks and safety clothing only proved their courage. Military metaphors were used frequently and with alacrity: nurses and doctors fought in the front line in the war against the epidemic; as long as they held the line, the battle was not lost. In my neighbourhood, a roughly hewn rhyme written by local football Ultras was strewn on banner across a hospital building “Ihr seid die Helden unserer Stadt, macht den Virus platt!” (an English approximation could read “you are the heroes of our town beat this virus into the ground”). Others showed their reverence and respect with nightly applause or balcony concerts and the relief at being able to stay at home while this battle was ongoing was quite visible in these performances.

Other professional groups were also quickly raised to hero status: supermarket employees working extra shifts to serve hoarding customers and fill up the quickly emptied shelves, sanitation workers ensuring all garbage and waste was disposed of during the lockdown, parcel carriers, policewomen, truck drivers and geriatric nurses–to name but a few. From 19 March, Spiegel online presented an everyday life hero or heroine of Corona on a daily basis, and a week later the ARD news show Tagesthemen began a series of portraits of everyday heroes. All those who were engaged in an activity classified as systemically relevant and all those employed in the sectors of health, safety or the supply of food were allowed to bask in the warm glow of heroism for a moment. All– save Romanian asparagus cutters and temporary workers in the meat industry.

Such inflationary use devalued the honorary title, which had acquired a somewhat state aftertaste anyway. Nurses reminded the audience that clinics had long suffered chronic staff shortages and they had been working to their limits for little money even before the pandemic. Instead of trite words, they demanded increase of salary and staff. When a large food discounter, which had come under criticism for inadequate occupational health and safety, summarily promoted all 83,000 employees to superheroes in full-page advertisements, the everyday hero gala completely degenerated into a PR campaign.

The hero hype soon died away. The clearer it became that the feared collapse of the health system in Germany would not occur–at least not for the time being–the more dispensable the heroines at sickbed and supermarket checkout became again. They had long since seen little change for them after their fifteen minutes of fame. In hindsight, in each of the You Be Our Heroes campaigns, the distinction between a sincere intention to at last, give credit where credit is due to those whose work is usually ignored, and clever marketing, had been extremely fuzzy the whole time. Whether the heroic praise was poisoned at the well of concealed organizational failures, fobbing off the celebrated with symbolic gratuities, or a friendly gesture–calling up pathos formulas with a wink of the eye–was hard to tell.

While the everyday heroes embodied a readiness for action and sacrifice above all, the heroic self-dramatization of the political personae all turned on presenting gestures of authority. Be it a presidential heroic poser talking the danger down re Bolsonaro, or Macron’s sinister face declaring, “nous sommes en guerre”, or Trump and Putin bizarrely pulling out first one and then quite the other register, the song remained the same: No need to worry, we have everything under control!

Vociferously asserting a sovereignty that one clearly is not in possession of is a risky strategy. Undisguised grandiloquence easily tips over into self-demolition. Heroes have to demonstrate their heroism or their charisma fades rapidly. However, the Corona pandemic is an unsuitable testing ground for heroes, and the virus is duly unimpressed by any excessive rhetoric of determination. The crisis does not require great men and women to overcome it, but rather a robust medical system, coordinated research and economic rescue programmes. Above all, however, each and every individual is needed for what is actually required is completely unspectacular: stay at home, keep your distance, wash your hands, sneeze hygiene. Heroic epics can hardly be distilled from this source.

In Germany, the Chancellor, her ministers, and the prime ministers of the Federal States largely dispensed with heroic rants. Instead of stirring up images of the enemy and issuing slogans of endurance, the appeal was to solidarity. Their post-heroic appearance played a decisive part in ensuring that the measures to contain the number of infections met with broad acceptance and soon began to take effect. The vast majority of the population was prepared to obey the orders of the political crisis managers, for the decisions were based on scientific expertise without trivializing the demands and urged all the more caution in view of the great difficulty in predicting how the pandemic may develop. No matter the degree to which Bavarian prime minister Markus Söder wrinkled his forehead and insisted on the gravity of the situation–even he did not play the role of a saviour in times of need, but that of a caring father.

Similarly, the expert virologists, whose media presence at times exceeded that of the politicians, did not quite fit into the heroic scheme. Paradoxically, they gained authority precisely because they were unable to answer all questions, communicating instead what they did not yet know and modifying earlier recommendations on the basis of new findings. There is an essentially post-heroic element about the preventive thrust of virology education. It lacks the drama of the act of saving in its ultimate goal of bring about a non-event. It is successful when that which is feared simply does not take place. The sentence that top virologist Christian Drosten recalled, “There is no glory in prevention”, also means that there can be no preventive heroes.

So, does the seat of the Corona heroes remain empty? The everyday heroes do not wish to be heroes; the political personae either embarrass themselves with their swagger or shift to the role of good shepherd, which is not very hero-compatible; after all, scientific expertise can hardly be converted into heroic capital. A white coat is not quite hero apparel. At first glance, the Corona crisis seems to confirm the diagnosis of post-heroic society. The heroic boom–a flash in the pan at best.

At least the polarizing power of heroic narratives remains unbroken. Toppling monuments also works using chat show armchairs. Politicians and experts may be defunct as heroes, but they certainly function as scapegoats. The authority they have gained, especially at the beginning of the pandemic, is matched by the hatred the now notorious angry citizens and conspiracy mythologists pouring out on them. And those who now stage themselves as heroes of resistance against the government’s measures confirm once more: Where heroes enter the stage, there is cause for general concern.

Ulrich Bröckling is Professor of Sociology at Albert Ludwigs University, Freiburg, and the author of Postheroische Helden. Ein Zeitbild [Postheroic Heroes. An Image of the Time] (Suhrkamp, 2020).