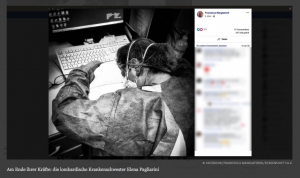 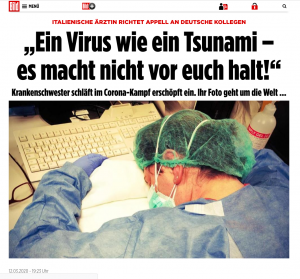 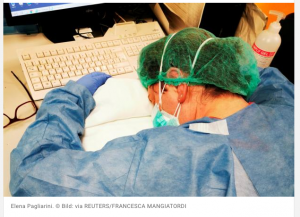 A photograph of nurse Elena Pagliarini, fast asleep, after completing one of her shifts at 6 a.m. was taken last week in the emergency room of the hospital of Cremona, a particularly badly affected town in Lombardy. Francesca Mangiatordi, a doctor in the same clinic, took the picture and shared it on Facebook (“I want this photo to be an invitation to help: stay at home, respect the rules, because that’s the only way we can stay together”). This is another straightforward picture of the crisis, another entry in the corona iconography, whose persuasiveness is a direct result of its immediate intelligibility and universality. The view of Pagliarini’s head and shoulders fast asleep on a work desk in full IC kit speaks volumes of the current condition of Italian hospitals. Nonetheless, the picture could actually have been taken at any other time, in any other comparable health emergency situation in the expanded present. It speaks a universal language and would be the perfect image for a “mythological” reading à la Roland Barthes. It should not be forgotten, however, that this picture, which may be considered an easy target for generalization and normalization, is surrounded and overwritten by hundreds of other hospital pictures that are currently penetrating the online forums coming from the “hotspots” of the corona crisis; as well as by numerous newspaper articles, Facebook messages and podcasts from nurses and doctors who repeatedly describe their experience of exhaustion and despair in terms such as “war” and “tsunami” (which then may trigger the sensationalist routines of the “Bild” newspaper and other tabloid media). Nevertheless, or perhaps because of this, it is advisable to listen to a podcast such as the one with lung specialist Fabiano di Marco from the University of Milan, interviewed after three weeks on duty without a break (published on March 16 by the New York Times Daily). TH