Living in the uncanny (Journal of Visual Culture & HaFI, 19)

This is the nineteenth instalment of a collaborative effort by the Journal of Visual Culture and the Harun Farocki Institut, initiated by the COVID-19 crisis. The call sent to JVC’s editorial board, and a wide selection of previous contributors and members of its extended communities, described the task as follows: “There is a lot of spontaneous, ad hoc opinion-making and premature commentary around, as to be expected. However, the ethics and politics of artistic and theoretical practice to be pursued in this situation should oblige us to stay cautious and to intervene with care in the discussion. As one of JVC’s editors, Brooke Belisle, explains: ‘We are not looking for sensationalism, but rather, moments of reflection that: make connections between what’s happening now and the larger intellectual contexts that our readership shares; offer small ways to be reflective and to draw on tools we have and things we know instead of just feeling numb and overwhelmed; help serve as intellectual community for one another while we are isolated; support the work of being thoughtful and trying to find/make meaning…which is always a collective endeavour, even if we are forced to be apart.'” TH

Living in the uncanny

Sometimes it snows in April, as Prince sings, but you know it’s uncanny when it hails in May, like it did a few days ago. I live in the epicenter of the pandemic, in the zip code with the third highest reported cases of COVID-19 in Manhattan as of May 5. I have not taken the subway since March 11 nor scarcely left my apartment. The trains now seem like the stuff of urban legend, practically gothic, housing the homeless who like ghosts haunt the subway cars. Two corpses were found before the governor finally decided it was time to shut them down for the wee hours of the morning, for the first time in over a century.

Freud describes riding a train and being startled by an old man whose appearance he very much disliked. Jumping up he immediately realizes that the intruder is merely his own reflection in the mirror on the washing-cabinet door, which had swung back when the train jolted. What happens when misrecognition becomes uncanny recognition? How to return to “normal” when the unconscious has been made conscious and refuses to be repressed? Freud can only recall his disgruntlement.

It takes but a moment’s reflection to notice that viruses are by definition uncanny, situated as they are in the “gray area between living and nonliving.” A virus takes up its home in your body, unhoming you. The effect of the foreign invasion is that we become, in Julia Kristeva’s words, strangers to ourselves.

The uncanny is here before it makes its appearance known. The conditions for the uncanny are latent, and then something occurs that reveals it in all its horror. Or is it the rupture itself that is uncanny? Is the event or the effect or the conditions for the event or effect uncanny? And what exactly is the uncanny – is it a noun or an adjective, an object or a method? Do we simply bracket those questions and ask what it does, and whether what it does might be put to use?

SARS-CoV-2 has spikes that stick to our cells, and in order to infect us, they need to be cleaved, which can be done by Furin, an enzyme ubiquitous in the human body. In the case of an infection, an invisible invader enters and attaches to us. Our own cells split the foreign intruder, allowing it to contaminate our body, turning ourselves into our own evil twins. Do we host our own double within us? But it is not the infection that kills us. Like cancer or other immune disorders, it is our own immune system, attempting to protect us, that wreaks havoc on our body. Isn’t the body always already uncanny? Does the virus only make it more so?

I think of being a “yellow woman” in the time of coronavirus. I think of coughing while Asian. As someone who grew up being called a “nigger” by white suburban middle-class boys unable to distinguish the subtleties of racial color lines, I escaped to New York City in order to be spared such racial violences. Now I contemplate whether it is worth stepping outside and potentially being assaulted unintentionally or intentionally, whether as a result of the virus, or being spat on, stabbed with scissors, attacked with acid while taking out the garbage, or kicked in the head while waiting at a railway station.

We face our doubles in masked others and our own masked mirror image, and this uncanny encounter must force a reckoning with what has been normalized—a familiarity with inequities that needs to become unfamiliar and intolerable. If the pandemic has made everyday life uncanny, let the portal that has opened not lead to further devastation but to a defamiliarized world ripe for re-invention. Perhaps the virus is or does the uncanny by alerting us to the ghosts that inhabit our living. We need to travel through the portal with our ghosts, with our dead (Munoz) as uncanny allies.

Simon Critchley says that we, meaning “thinkers in self-isolation,” should shut the fuck up and talk to our plants. I mourn my abandoned plants, stuck in my office downtown at The New School where Critchley coincidentally also teaches, although we have both been presumably teaching on Zoom.

My office is in a public building a couple floors above Hulu, which might now be considered an essential business. I know I’ve been streaming constantly since the pandemic began, and as I have learned from Laura U. Marks, I now owe the planet at least a modest forest of trees. The orchids were in bloom when I last watered them on March 10. I am sad to think of them withered. The snake plants and cactus are heartier, but surely won’t have survived before I return, or will they? Some forms of life (and nonlife) surpass expectations in their tenacity. 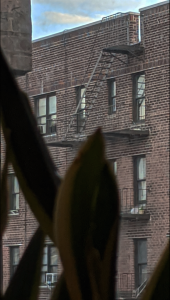