Social distancing without a society

“The Utopia of fascism is an edenic freedom from responsibility.” (Klaus Theweleit)

Thesis 7 on “late fascism” by Alberto Toscano states “Late fascism is driven by a desire for the state and a hatred of government.” Toscano’s hugely significant contribution to the understanding of our political predicament provides an understanding of the ways right-wing politics reacts against what is already a liberal counter-revolutionary reaction, and invites an establishment of an organization along the lines of the Comintern-backed Paris Institute for the Study of Fascism, which invited Walter Benjamin to write “Author as Producer” as a lecture held on April 27, 1934.

April 2020 saw the emergence of well-orchestrated small protests throughout the US. These gatherings of the American right-wing declared they demand to “re-open the economy,” as they call it, and stop the special measures and directives aimed at reducing potential infections in COVID-19. These protests were payed for by the wealthiest donors to the US Republican party, among them, the family of Betsy DeVos, secretary of education in the Trump administration. From curb-side picketing, to blocking of entrances to hospitals by creating traffic jams in front of their entrances, to demonstrating in front of state capitol buildings where governors issued shelter-in-place orders, these were small rallies that received huge media coverage worldwide. The criticism around these concentrated on the fact that by gathering in public, these protests expose their participants to the virus and by that further jeopardize the collective health and well-being.

Looking at the slogans on the placards and signs the protestors carried, signifies that these are political rallies. Aimed for the resurgence of supposed “grass-roots” right-wing movement as the anti-Obama Tea Party movement was in its day, these rallies are directed at the Presidential elections of November 2020. Staging tiny rallies with sophisticated appropriation of slogans and phrases, enabled these assemblies to amplify their message and get huge exposure on social media and network news. Legitimizing the extreme-right has been the mainstream media’s greatest achievements in recent years. Responding to attacks calling it Lügenpresse and “Fake News” has made main commercial media outlets succumb to a false objectivity framing by which the extreme-right achieves the legitimacy of an acceptable political stand with a liberal order. The absurdity of amplifying a criminal recommendation by the US President for people to drink chlorin, is well within the media’s complacency in magnifying extreme-right-wing positions. Once blatant racism was perceived illegitimate by media corporations, but the shock effect and the righteousness of its denunciation, brought liberals to give it more and more room.

As one can observe from the rallies and slogans, the extreme-right has been able to harness strategies that were developed on the frontlines of communist politics. Lenin’s strategy of operating both from the inside and outside, attacking the Duma and running for elections to the Duma, is copied by the Trump administration (attacking state governments for their social distancing policies, continues his assertion that he will not accept the results of the 2016 Presidential elections if he is to lose); Mao’s cultural revolution as a pincer movement from above and below (the supposed grassroots activities of the Tea Party and US Congress, the alt-right and the Republican Senate); Gramsci’s cultural hegemony (platforms like 4chan, Twitter, Breitbart, etc. are able to frame and dominate the discussions in the US); or Gramsci’s “organic intellectual” (the role of clergy in evangelistic politics in the US). The slogans on the placards here take from feminism, freedom of speech, anti-authoritarian legacies, innuendos and condemnations of totalitarianisms, critique of model-making and quantifiable life – all historically leftist struggles. Their appropriation and manipulation of leftist claims should be understood within an ongoing collapse of a whole set of guiding concepts defining the public, the political and then social. 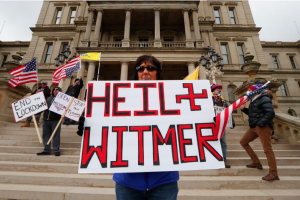 Name of Governor of Michigan Gretchen Whitmer (D) misspelled on a sign with a reversed swastika (sauvastika). Lansing, Michigan April 2020 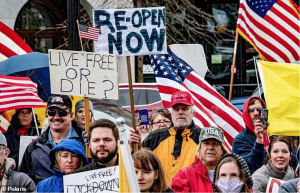 “Live Free or Die” with a question mark poster in a small rally in front of New Hampshire State House, Concord, New Hampshire

“Live Free or Die” is the official motto of the state of New Hampshire. The phrase was adopted from a toast written by General John Stark, New Hampshire’s most famous soldier of the American Revolutionary War, on July 31, 1809. Poor health forced Stark to decline an invitation to an anniversary reunion of the Battle of Bennington. Instead, he sent his toast by letter: “Live free or die: Death is not the worst of evils.” This assertion corresponds with a long history of aristocratic and conservative formulation of slavery and freedom with regards to love of life and fear of death – from Xenophon and Aristo, to Leo Strauss and Arendt. Unlike other, milder, state mottos (like the sentimental “Virginia Is for Lovers”), this state motto invokes a certain anti-authoritarian self-image of American independence. It appears here with a question mark that undermines the defiant declaration it is supposed to invoke. 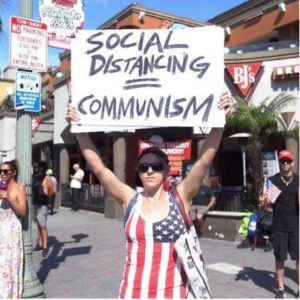 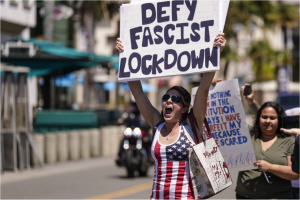 In one photo she is holding a placard which says that Social Distancing equals Communism and in another she is holding one that calls to Defy Fascist Lockdown. The comparison of Communism and Fascism is the bedrock of American cold-war liberalism. The political and moral equivalence between the “Two Totalitarianisms” was promoted by many Anglo-American liberals during the twentieth century. But, while liberalism ignores inequality (claiming equal opportunity), Fascism and Communism both acknowledge inequality – Communism sees it as a social construction at the heart of capitalism, and Fascism perceives it as inherently a racial discrepancy. The defiance against the lockdown as Fascist, is a well-known form of denunciation – Fascist here seems to stand for criminal or unjust. The denunciation of Social Distancing as Communism in the other placard, implies that the re-opening of the economy, as it is called, will re-assert capitalism. And by that it will be able to continue ignoring inequality. 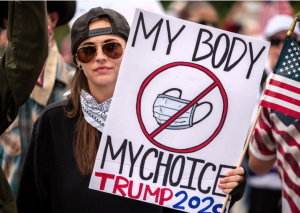 A signed held by a young woman with the Feminist slogan for reproductive freedom: “My Body, My Choice”

In the center is a crossed-out face-mask. In many US cities, the mask is considered required when entering supermarkets, pharmacies and any other facilities open to the public. Medical experts, state and local officials, and even members of the Trump administration have asked the public to wear those in public, with the understanding the one is protecting others with it, taking into consideration the possibility that one might not have the symptoms of COVID-19, but is still infectious. The person in the photo is wearing a bandana on her neck (which is used as an improvised mask in many US cities). The ability to co-opt the symbols and language of other movements, is one of the strongest media strategies of the contemporary right. The slogan “My Body, My Choice” has been the defining claim for abortion rights in the US. It was first highjacked by the “Anti-vaxxers,” which is dominated by a wide-spread network of libertarians and alternative-truthers. What the Anti-Vaccine movement was able to do to this statement, is to make a persona assertion of a woman on her own body into an anti-social war cry. Deciding whether to vaccinate is not a personal choice, but a matter of public health. The macabre cynicism of the appropriation of this slogan receives yet another twist as the mask is required as long as there is no vaccine for COVID-19. Within the logic and history of the hijacking of this slogan, it is unclear if the person in the photo would agree to be vaccinated, once these is offered to the public and people can get rid of the face-mask. The photo was taken in front of the Texas State Capitol Building, Austin, Texas. 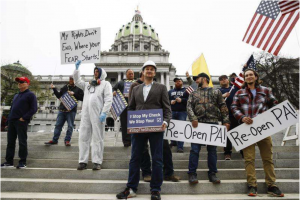 A person wearing a disposable protective suite, medical gloves and gas mask, is holding a sign saying “My Rights Don’t End, Where Your Fear Starts” in Harrisburg, Pennsylvania

The sign is paraphrasing a right-wing slogan evoking freedom of speech popular on stickers and t-shirts “My Rights Don’t End, Where Your Feelings Start.” This original slogan is usually accompanied with an image of a gun, and the logic it proposes has been used many times in extreme-right-wing attempts to find legitimacy in mainstream platforms. From news outlets to university campuses, this logic has been used in the create a false balance by framing the extreme-right as a legitimate political stand. One of the most blatant expressions of this was when US President Donald Trump claimed an equivalence between US Nazis and the people who stood against them in Charlottesville, Virginia, when he said in a press conference “I think there’s blame on both sides” (15 August, 2017). 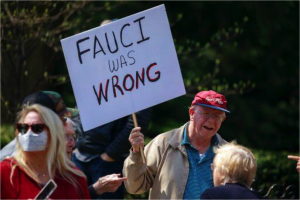 A man holds a placard that says “Fauci Was Wrong” outside the Indiana Governor Mansion, Indianapolis, Indiana

Anthony Fauci is the director of the US National Institute of Allergy and Infectious Diseases. His Compartmental models in epidemiology, have been instrumental in explaining the need for social distancing and self-quarantining. By definition, these models are based on limited data on past-behavioral patterns, therefore they are always wrong in predicting what will happen but are at the same time are correct in their depiction of what might happen. The term “Flattening the curve” comes out of these models. The models they suggest provide worst-case-scenarios, as the repercussions of wide-spread infections mean a collapse of health-services and with them a possibility of intensified pandemic and social collapse.

Joshua Simon is a writer and curator based Philadelphia. Fore more, see an interview with the author, just published in the Los Angeles Review of Books.