Supplying the demand for non-stop coverage of the crisis, the number of phenomena considered relevant, telling, or symptomatic of the pandemic proliferate. And as eyeball competition (of which this tiny enterprise of critical commentary and exchange is arguably, also a part) escalates, states of stupor become increasingly common.

One of the new “aspects” of the coronoavirus crisis to exceed my understanding and leave me practically clueless came to this screen two weeks ago in an Alexandra Schwartz article in the New Yorker. Writing about online performances and performativities of the lockdown, Schwartz dwelt extensively on the recent surge of rubber gloves, face masks, and medical equipment in ASMR videos, the latter a YouTube fad organized around a specific relation of image (the influencer toiling with a variety of materials and textures in close-up) and sound (the microphones deployed being the true stars of these clips for how they present the quality of a presenter’s whisper).

Broadly speaking ASMR surfaced in the early 2010s and probably peaked around two years ago. Though never having gone away it has resurged, promising to bring calm and sensual-cerebral comfort in times of isolation and dread. Schwartz does a very good job of explaining and reading the phenomenon, and merits a lengthy quote:

“[…] ASMR is the name given to a physical sensation, without known neurological cause, of gentle and pervasive pleasure. The name, which is short for ‘autonomous sensory meridian response,’ suggests some scientific authority that is as yet unfounded. […] One way to describe ASMR is as a kind of sustained tingling that begins in the scalp and spreads to the back and the limbs, a bit like the tickling that leads up to a sneeze. It’s as if a tiny hand has reached through the ear canal to deftly, tenderly, brush the surface of the brain with a feather. The shoulders relax; the jaw loosens. The feeling is induced by certain stimuli, or, in the language of the large Internet subculture of people who make videos to elicit an ASMR response in others, ‘triggers.’ The sound of whispering and that of a low, calm voice are popular triggers, as are ‘mouth noises’: the light smack of lips parting, the clack of a hard consonant born at the back of the throat, the slur of the tongue sliding along the palate. Hundreds of ASMR videos on YouTube show women tapping and scratching long, manicured nails against countertops and makeup cases and the covers of hardback books. There are paper-crinkling videos, and videos in which women (it is usually, but not always, women; the genre has a bias toward a maternal, nurturing tone) pop bubble wrap, or plunge their fingers into bowls filled with buttons or M&M’s, or scatter and stroke the pieces of a jigsaw puzzle. I have listened to someone count in a slow whisper from one to a hundred in German, for no other reason than that it seemed soothing at the time. […] It can all get a bit haremesque. Click and click and click; one whisper chamber leads to another, and another, and another, the Internet turned, for a change, into a pleasure palace made by women for one another. The women of ASMR see themselves as caregivers, unofficial tenders to their fellow video watchers’ mental health, and, as totally nuts as that seems, they’re not altogether wrong. […] Digital role-plays, which dominate ASMR-land, require the implication of a dialogue between the ASMRtist and you, the person being attended to—at the salon, or the shoe store, or whatever medical office you might visit to get an ear cleaning or a procedure, popular with ASMRtists, that is called, rather sinisterly, ‘a cranial nerve exam.’ […]  A form that aims to soothe anxiety and calm the mind, to transmit physical sensation without touch, seems made for our frightening, contactless moment. […] I am right now being ‘examined’ by ASMR Darling, an ASMRtist with nearly two and a half million subscribers. She is wearing a lab coat and a face mask and is saying, in the softest tone possible, that she is about to take a nasal swab to test for the virus. It’s scary and soothing at the same time. In the world that she’s created, we can all get the care we need.”

Clicking deeper into the Condé Nast world of publishing, a Wired article on ASMR takes a different, more functional approach. It praises the effectiveness of the videos in helping people in quarantine by dint of the diversion and comfort they allegedly provide, thus soothing the distress: “That sense of diversion coupled with comfort means ASMR ‘may be uniquely suited to these times,’ says Greg Siegel, director of the Program in Cognitive Affective Neuroscience at the University of Pittsburgh. Moreover […] those who experience ASMR response show lowered heart rate and increased skin conductance, indicators that the emotion and intimacy felt is based on a real physiological response. That’s important, because for many, there is no physical intimacy without immense risk anymore. […] When folks can’t touch or be touched, their brain’s threat response levels escalate at alarming rates. Physical and social connectedness provide the brakes needed to slow the roller coaster. For those who don’t have that, ASMR can fill the void.”

Speaking of brains and the cerebral, however, recommending ASMR as a quasi-medical palliative offering relief from panic and depression is clearly as remote from any notion of critical discourse as one can possibly think. 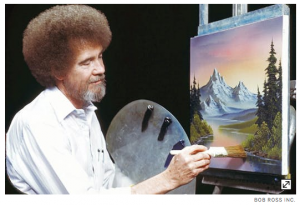 Regressing to the kind of sedated, screen-glued creature that finds comfort in watching (and listening!) to Bob Ross (one of the “accidental pioneers of ASMR”) during day long “Joy of Painting” marathons used to have a, if creepy, fun quality about it. With the pandemic producing an environment of universal anxiety, replacing intellectual labour with “head orgasms” however might grow more intelligible and legitimate to many.

One of the most popular ASMR videos is by singer Cardi B. Uploaded in October 2018, it has since been clicked almost 37 million times. Cardi B was basically promoting her new record, but she worked the protocols of the ASMR genre even more effectively than many of the ASMRtists leading the current ranking, such as Gibi (further below). For one, she was a celebrity before entering the ASMR world (that, by the way, is to a large degree influenced by K-Pop stylistics); and what’s more, she almost gleefully copied Gibi’s use of two microphones instead of only one.

Such are the kind of monumental moves that the methodological narrowness of the genre allows. As intimacy becomes ever more formulaic and monetized (Gwyneth Paltrow’s Goop venture might be cited here as a typical ASMR friendly business), questions about the updates of intimacy’s function and status as a socio-psychological predicament have to be asked. They seem particularly necessary considering how conditions of physical proximity and touch have changed so abruptly, and probably for good.

It is easy to dismiss ASMR as a low version of mindfulness, as a degree zero of cognition, akin to the whisper and mumble of similarly formulaic emo rap, K-pop, vapor soul, etc, and catering to the same self-defeating, if not outright suicidal tendencies imbricated in these (youth) cultures. At any rate, the blunt refusal of critical thinking and the cult of the dying voice minimize the options, intellectually and otherwise.

ASMR videos posit a jouissance of the luxury impelled by touch, they explicate the claims to value made by products and their surfaces, and in the context of the pandemic they glean pleasure from the look and feel of intensive care units. They are indeed “scary and soothing at the same time,” bespeaking a zombiesque future in which killing comes softly, inaccessible in their excessive proximity of distant touch, sight, and sound. TH