The new ekphrasis of the V-shape 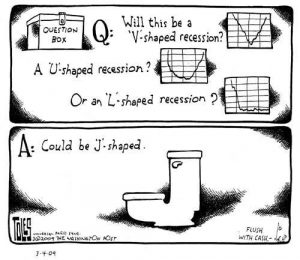 “Recessions start when no one sees them coming,” was the title of a Forbes article from May 2019. Economic forecasting, its author wrote, doesn’t usually include the likelihood of a recession: “When have you seen more than a handful of economists, stock market strategists or government agencies project the economy shrinking for two quarters in a row?” Now, obviously things look quite different. Thanks to the evidence rammed into reality and “our” perception/construction of it by SARS-CoV-2, the “handful” of economists and other pundits who expect a recession have multiplied considerably, in fact they have become the large majority.

What is a recession? Definitions differ slightly from national context to national context. This is the US National Bureau of Economic Research‘s (NBER) short version: “A recession is a significant decline in economic activity spread across the economy, lasting more than a few months, normally visible in real GDP, real income, employment, industrial production, and wholesale-retail sales. A recession begins just after the economy reaches a peak of activity and ends as the economy reaches its trough. Between trough and peak, the economy is in an expansion. Expansion is the normal state of the economy; most recessions are brief and they have been rare in recent decades.” Apart from clarifying some of NBER’s and other economists’ basic assumptions about the economy (e.g. expansion being its “normal state”), the language is revealingly close to ekphrasis, it describes or rather evokes a landscape of peaks and troughs, of brevity, rarity, and temporality. The entire language of economic boom and bust, of surge and slowdown, of cycles and conjunctures, naturally relies heavily on metaphor, on slippage between word and image. 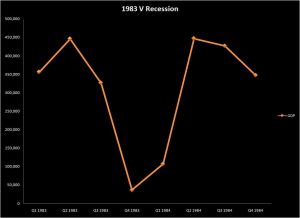 Hence the current conversation on recessions as V-shaped, U-shaped, L-shaped, W-shaped, etc. (recession shapes being helpfully summarized by Wikipedia), may also be discussed in terms of rhetoric and aesthetics. This is how classicist Froma Zeitlin introduces the subject of ekphrasis, probably most pertinently here: “Ekphrasis is a slippery topic. Although [normally understood] as a rhetorical figure (or figure of speech), its uses and functions far exceed this single classification. Whether defined as a rhetorical exercise, a literary genre (or mode), a narrative digression, a species of description, or a poetic (even metapoetic or meta-representational) technique, the properties associated with ancient ekphrasis are not in doubt. First and foremost are the qualities of enargeia (vividness), sapheneia (clarity), and phantasia (mental image), which, taken together, aim to turn listeners (or readers) into viewers and to evoke an emotional response through an appeal to the immediacy of an imagined presence. Yet, beyond this brief definition, the word ‘ekphrasis’ immediately ushers us into a whole set of questions regarding its intermedial status in a potential contest between verbal and visual representations, the uses of mimesis with regard to verisimilitude (reality–illusion; truth–fiction), and its cognitive, psychological, and mnemonic values in the cultural expectations of its era. It would not be hyperbole to suggest that no other rhetorical term has aroused such interest in recent years among classicists and non-classicists alike, involving aesthetic considerations, theories of vision, modes of viewing, mental impressions, and the complex relationships between word and image.”

It may appear somewhat far-fetched, perhaps even frivolous, to render the upcoming/ongoing recession in aesthetic terms, but there is no way one can avoid admitting the metaphorical nature of much of what is happening right now. The image of the V-shape recession, a sudden deep trough, followed by a quick surge—for a few, and particularly the Germans with their economic strength and infamous intransigence when it comes to economic solidarity (e.g. their refusal to accept “coronabonds” to help their European neighbours), this image is now ((in the wake of V-irus) coming close to being analogous to the V-ictory-sign. Thus the Kiel Institute’s most recent headline reads like premature cheers of triumph: “GERMAN ECONOMY: V(IRUS)-SHAPED RECESSION AHEAD.” TH