Virus and infection – the trouble with analogies

My desire during the first days of the coronavirus crisis to absorb as much information as possible from the media and networks has abated somewhat… nevertheless, even before today’s (March 30th) breakfast, I read the news that Twitter has deleted two tweets by Jair Bolsonaro and that Brazilian judges have banned “information on the coronavirus without scientific basis” – including the “Campaign’ Brazil must not stand still.” 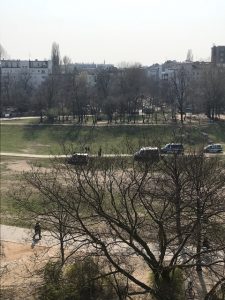 While in the past few days I have been gaining an overview of the sheer abundance of online access to libraries and databases, which will be expanded until the end of April, my inner excuse for the growing mountains of reading material has been views from window of people walking, jogging, walking their children and dogs, dealing, smoking, drinking, sitting on benches and lawns, gasping for air and enriching themselves with vitamin D in Görlitzer Park in Berlin-Kreuzberg. The mass ornament, which formed on the past sunny days from noon at the latest, was thereby noticeably fragmented – no more human cudgels or if so, then only for a short time, until the police patrol – occasionally in coronatechnically precarious dozens – came by and gave loud orders to get up, move on and separate.

The fact that Bolsonaro got at least one little shot across the his incredibly stupid, right-wing radical bows motivated me, a few hours later, to start reading into Suely Rolnik’s Zombie Anthropophagie. Zur neoliberalen Subjektivität (Turia + Kant, trans. Oliver Precht, 2018), a text first published in 2005 (in the catalogue of the WHW curated exhibition Collective Creativity at Kunsthalle Fridericianum, Kassel), which I am about to discuss with the students of my course at the Vienna Academy of Fine Arts after the extended Easter holidays (probably by distant teaching) – it was originally intended as a preparation for our now cancelled excursion to Brazil.

Today, as it was snowing to coincide with the approaching month of April, no longer distracted by the now deserted park, I recapitulated the theses of the Brazilian psychoanalyst, cultural theorist and curator on the possibility to set in motion a “political process of cultural and existential experimentation” against the prevailing neo-liberal flexibilisation of the individual – a process that Rolnik identifies with the “active pole” of the historical anthropophagy of the 1920s and its “renaissance” in the 1950s to 70s as a movement that is in favor of the idea of a decolonising approach or ‘decolonisation’. expropriation of the colonial myth’ of man-eating: According to this myth, which was most influentially and effectively appropriated by the poet Oswald de Andrade and the painter Tarsila de Amaral in the 1920s, the Tupí, as one of the largest Indigenous population groups before the Portuguese colonization, always (only) devoured their enemies when they were considered strong and thus worthy of surviving in their bodies as strangers and connecting with them in a metabolic way. A more respectful and disrespectful example of lived non-hierarchical co-existence is hardly to be found. No wonder, therefore, that historical anthropophagy is now considered one of the most important points of reference in postcolonial studies.

Even more pertinent it appears to me that Rolnik makes a valid distinction between an “active” and a “reactive pole” of anthropophagy, which has long since been included in Brazil’s national branding (although it hardly matches Bolsonaro’s viewpoint). Thus the author correctly pleads for a more ambivalent perception of “anthropophagic subjectivity”, inasmuch as since the 1970s it has increasingly been adapted to the capitalist-colonialist mode of production and has thus become a mainstay in the neoliberal subjectiviation of Brazilians who fetishize their cultural otherness.

Paraphrasing Rolnik’s critical approach seemed apt, because of the virus metaphor she has deployed in her argument:

“In effect, it would seem that since the end of the 1880s and early 1990s, and even more so beginning in the second half of the 1990s, in Brazil and elsewhwere, the virus in faith in the paradise promised by cultural capitalism – this myth that parasites subjectivity in its most essential powers – has begun to be identified. A movement in search of an antivirus has begun everywhere – from art to political activism, via social movements and through all sorts of transversality between them. The bedazzlement brought on by the celebration that capital makes out of life a power of creation, whose goal is to subject it to a relationship of pimping, has begun to be ‘cared for,’ in such a way as to reactivate the critical force – the health – of this power.” (Translation: Brian Holmes and Stephen Wright)

This passage made me think of of how Sylvia Sasse, a scholar of Slavic culture, who teaches in Zurich, has objected to Slavoj Žižek’s response to Giorgio Agamben’s problematic thesis of a normalization of the state of emergency, radicalized under the conditions of current crisis politics: Sasse’s criticism targets Žižek’s, in her eyes, inadmissible equation of “real epidemics” with Tolstoy’s literary theory of art, which is based on the idea of cultural contagion. From here, the Slovenian philosopher and cultural critic constructs a concept of the viral, which he declares to be a universal condition of existence confronted with the omnipresence of death.

Reading Zombie Anthropophagie, informed by Sasse’s criticism, I started to wonder whether Rolnik’s discriminating evaluation of social subjectivities according to the criteria of pathology and health doesn’t need to be questioned and scrutinized as well, especially since it places “artistic, political or existential experimentation” at the active pole and claims it to be a condition for the liberation of a “perverse instrumentalisation” of “living subjectivity:”

“We have to recognize that this misery [the “energy-sapping race of production”, SB] not only suffocates us, but that, what is even worse, we create this misery and shortness of breath ourselves, because we take pleasure in pimping the drive, in its exploitation by the colonial capitalist system.”

As if Rolnik had already, as early as 2005, anticipated the effects of the virus that is currently chokeholding the world: For the already discriminated minorities, including the predominantly black service providers and domestic workers recruited from the favelas, are now considered particularly at risk. However, their living and working conditions hardly fit Rolnik’s profile of flexible subjectivity, which she probably locates more in the (neo-)bourgeois-liberal-creative milieu. Therefore, with Sasse in mind, when reading Rolnik’s book, I felt an irrepressible uneasiness concerning the metaphorical analogy of neo-liberal subjectivity and viral infection. For what does this analogy mean in the context of an autocratic policy that apparently wants to do little against the mass contagion to protect the neoliberal production and exploitation system it aggressively forces – and is acting even more stupidly and irresponsibly than Bolsonaro’s US counterpart? Moreover, Rolnik’s translation of the virus metaphor does not really add up in terms of the neoliberal principle of isolation either. Given the even greater risk of contagion for those who do not have safe or even luxurious living conditions, the image of a “sick society” that is conjured up could further fuel the already rampant reactionary fatalism: Significantly, Bolsonaro continues to receive support not only from the white bourgeoisie, but also from the impoverished population.

And last but not least, how is the equation of neo-liberal subjectivity and viral infection to be understood in the context of an intensified appeal to the police, i.e. state regulation, the questioning of which the otherwise socially critical minds, in their unlikely alliances with Twitter and the natural sciences, currently refrain from criticizing?

I believe that the distinction made by Rolnik between an “active” and a “reactive pole” of anthropophagic subjectivity does not (any longer) suffice in the face of such dilemmas. Thus, in times when we are content with the ‘Ebola elbow hug’ even among our dearest friends, perhaps contemporary appropriations of historical discourses on decolonization must be put to the test as well: This includes the idea of mutual incorporation, which has long been so crucial to my work – in the sense of that arithmetical procedure, the so-called casting out nines, which de Andrade declared almost a century ago in his manifesto-poem Pau-Brasil (1924) to be the precondition of a resistant “exuberant vitality.”