“Masks4ALL” – a Czech campaign, a MIT AI specialist’s support of it, and the new “solitary facelessness”

This video clip by the Masks 4 All campaign originated in the Czech Republic. Masks 4 All was founded by a group of scientists, investors, and designers, among them a particle physicist, a specialist in chemistry and aerosol physics, a microbiologist and virologist, a population protection expert, and a bestselling author and science popularizer. The campaign’s website explains: “On March 14 (two weeks since the first confirmed case), a speaker, writer and social media influencer Petr Ludwig made an educational video on the importance of wearing masks, not as a protection for yourself but to protect others in case you are unaware of being sick and are not showing symptoms. The video cites a study by researchers from University of Cambridge which concludes that surgical masks are 3x more effective than home-made masks, nevertheless they recommend home-made masks as a last resort when surgical masks are not available. As of March 22, the video had 560k views and was shared and promoted by many other Czech influencers. As the shortage of masks provided by the government continued, hospitals reached out on social media and asked if people may be able to sew a few masks for them because they were running low. In an unprecedented show of support, many people started making masks, not just for the hospitals but for everybody. The effort was both individual – people making masks by hand sewing or on a sewing machine at home, and organizational – theaters, non-profit organizations, small business and factories which normally produce clothes, linens, accessories redirected their efforts into full-time sewing. Local companies were sewing in bulk, supplying hospitals, senior citizen homes, the police or firemen. Masks were delivered to hospitals or to friends and neighbors who would often find them in their mailboxes. In some areas, people created  ‘trees’ where they would put available extra masks that were up for grabs for others.” Photographs upladed to the website show examples of the sites of making DIY masks (untypically featuring a male seamstress) and ways to distribute them in the neighborhood: 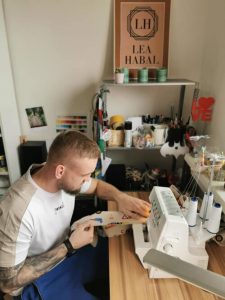 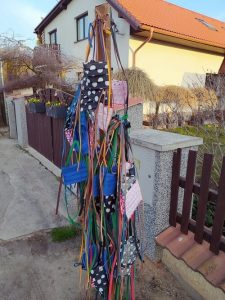 Lex Fridman, who recorded and uploaded this video about the Masks4ALL initiative is an AI researcher at the MIT and beyond (beyond meaning, among others, close to Elon Musk and Tesla). Fridman is a visible promoter of his own research and person via Twitter and other channels. In one of his tweets (from 2018), he revealed his Russian-American itinerary to US patriotism: “24 years ago I immigrated to the United States: from a skinny Russian kid with a soccer ball to an American scientist at MIT. I’m proud of what this great nation stands for, from its founding to its tumultuous journey in becoming a symbol of freedom and innovation to the world.” On his website, Fridman makes available his work on human-centered AI, deep learning, autonomous vehicles and robotics. His case might be considered an interesting example of how AI research, pandemic awareness and grassroots campaigning can meet on unexpected territory – territory now shared by allies of Elon Musk and DIY initiatives such as Maskbuilders: 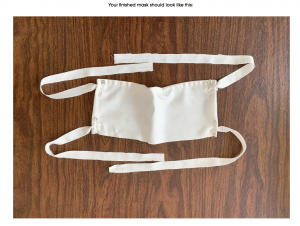 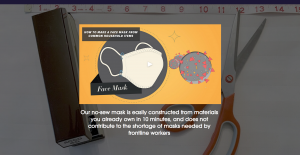 There is a lot to be said (and there has been a lot said already) about the enormous shift in the perception of the face mask in the course of the pandemic. Any (official or unofficial) ban on wearing face coverings, from anti-Muslim rejections of the burqa to the interdiction of the bandana of street protesters, any hidden or open racist/orientalist attitude towards “Asians” sporting respiratory masks in public is being suspended for the time being. Stories about national and local facemask identities abound. 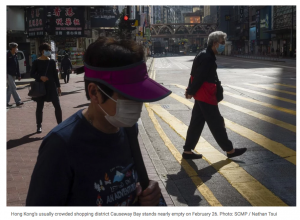 In a – beautifully illustrated – article for the South China Morning Post, from March 22 of this year, Fionnuala McHugh has written about, “How face masks have become part of the Hong Kong identity:” “Hard though it may be to believe, there was once a time when no one in Hong Kong wore a mask in public except for a laugh. Unless you were unfortunate enough to find yourself in hospital, masks were for jokers. (Or the Japanese – along with onsen and bonsai, they were considered part of that country’s arcane customs.)” But with the first SARS epidemic in 2003 these times of masklessness were over. “In its desperation for armour, the city turned to masks. Then, as now, they were in short supply. Then, as now, there wasn’t strong evidence they gave full-on protection. Even if you wore them continuously in the outside world, the virus could still scythe you down at home: the single worst cluster, in Amoy Gardens, in Ngau Tau Kok, killed 42 residents via their bathrooms. But a belief took hold that masks would protect you, even if you wore them dangling from your ear or clasped under your chin or damp with the germ-laden moisture of your own breath; and that psycho­logy has never left.” In the aftermath of the SARS crisis, the government of Hong Kong wanted their citizens to take off the masks again, they were considered detrimental with regard to tourism, and a hindrance for face recognition and police surveillance. The demonstrations of the past months however had entailed the return of masks of all kinds, as the protestors were trying to protect themselves from the very surveillance policy that had the citizens of Hong Kong discard their masks. Meanwhile, COVID-19 has all but muted the pro-democracy movement.

“And so the city,” writes McHugh, “retreats into its solitary facelessness. Masks remind me of childhood hospital stays and para­militaries and I fear them. They convey something uncanny, less than human. Often these days, I walk from Kennedy Town along Victoria Road – a thoroughfare that commemorates a crown – past the graves of 1894’s plague victims and the memorial arch of the old Tung Wah Smallpox Hospital, as far as the cemetery. The visitors emerge swathed and blank; the only faces to be seen are on the gravestones. All the way, the pavement is lined with fallen cotton-tree blooms, like scarlet shuttlecocks; and pale blue masks that have been wilfully discarded as if any sense of community has gone.”

The retreat into “solitary facelessness,” however, may have different faces, depending on local histories and previous exigencies. Building a global network of solidarity amid the crisis can surely be best served by the acquisition of the very practical DIY mask. Making a popular movement out of sewing and wearing masks in parts of the world where these habits are still unknown, is surely no longer exotic or even abject, it certainly has some work ahead of it, as the mask is in dire need to be implemented properly and widely. For to be unmasked here is really to find the villain of the piece and to remain masked is for the rest of the cast and its audience in the theatre of life to be able to face each other again in a safer future. TH