Locked into the present 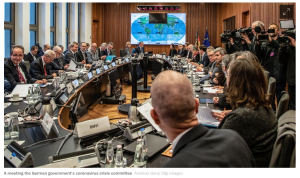 Amid the crisis, there is only crisis. We fall to crisis, we react to crisis, our thinking is dominated by crisis. We estimate the effects it will have on the future. And every crisis is worse than the previous one. The crisis creates the total present, apparently there is no before and no after. Yet we could as well draw lessons from the last “crisis,” which wasn’t a “refugee crisis” but a governmental crisis: it were the (Western) European governments who did not want to believe that Syria was nearby, that a civil war was taking place there and that the situation of the refugees in Jordan, Lebanon, Turkey and Greece was becoming increasingly unbearable. For several years, the UNHCR travelled through Europe and emphasised that the funds for the people cared for by the UN Refugee Commission only covered 40 percent of the needs – and nobody reacted and increased the funds.

The crisis has a history.

With “corona” it is very similar. For a very long time a wide variety of experts and institutions has been pointing out the dangers of a pandemic. But as much as people apparently believe that globalisation can be limited to the trade in goods (while the migration of people is to be prevented regardless), they apparently also believe that viruses can be stopped by Frontex. Since the outbreak of HIV, at the latest, people have basically been pretending that viruses only affect “fringe groups” or non-Western people: Ebola, MERS, SARS, Zika, Dengue, West Nile fever – what did “we” have to do with it? At the same time, the World Health Organization (WHO) has been systematically de-funded by state governments – today it receives two thirds of its funds from the private sector and thus increasingly depends on it.

In other words, this crisis, like any other, has a history.

Since real socialism, planning seems to have become a dirty word; it suffices to make the billions available when the crisis is imminent. The mayor of my home town recently told me that he can hardly communicate the consequences of the “refugee crisis” politically: Before 2015, all the small initiatives, the people with commitment had approached him for small amounts of money – and he had to tell them that the city doesn’t even have 500 euros to give. But then, with the “crisis” impending, suddenly millions of euros were spent. And when the crisis is considered to be over, we put it behind us. During the “refugee crisis”, a vast number of new forms of civil engagement and collaboration have emerged, as well as a myriad of new experiences – but did we learn from them at all?

After the crisis, we pretend that “normality,” this fetish, will return, and that all the pre-crisis mistakes can be committed anew. Right now new methods of problem solving are being tested – for example, in the responsive restructuring of education and labor. But how all these new experiences will be incorporated afterwards? Who will evaluate them? What might authorities learn from them? Without factoring in the lessons of the before and after, the crisis will remain a form of government that is locking is us into the present.

In that case, it is always only crisis.