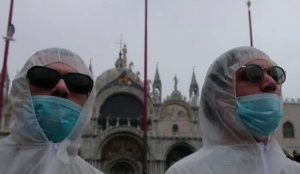 It is one thing to think, speak, post about the coronavirus crisis as an occasion and a subject of media, visual, social and discursive production. This type of analytical-critical approach is well rehearsed. Based on the more or less well-functioning interplay of mental-cognitive reflexes, this methodology ensures that A is considered to be the expression, representation, metonymy, allegory, image, etc. of B, and thus observed accordingly. But it would be something quite different, if everything had to be looked at in a radically different way, if the phenomenologies of the crisis had to be revisited in order to check if they themselves have not been caught up in the crisis.

As sociologist and activist Sandro Mezzadra writes in a widely read and shared blog entry (in Italian on Euronomade, in English translation on the Verso homepage), this global pandemic and the measures taken by the Italian government against it are in fact “merely exacerbating tendencies that have already existed for a while”. Seen from this perspective the pandemic itself would have become an organ or a medium of perception. Ultimately, it would have brought to clear and brutal visibility what until recently had been covered up, ignored, overlooked (and had to be, since the ideological operating systems on which the capitalist world system ran until recently could not have been maintained).

So, what if the crisis is not the “image” of something else, but is itself enabling vision? What if the irreversible situation in which the “world community” is now being united, forced to reimagine itself, has entailed a sudden leap in visibility regarding the global accumulation of crises – not primarily as a result of tireless research, political organizing, artistic productions etc., but rather as correction of the collective sensorium on a gigantic scale? TH