AI and visual ramifications of the crisis

Among the countless troubling aspects of the Covid-19 crisis is the liberating effect it has on AI-based surveillance technologies and policies. Not only does the crisis provide unprecedented opportunities for data extracting tech giants to expand their reach and power. It also enhances the ongoing transformation of global capitalism into a huge, democratically ungovernable laboratory. To a considerable extent, this is also a laboratory of vision, visuality, visualization. For one, there is the variety of infographics, dashboards etc. mentioned in an earlier post.

These maps, diagrams and statistics may enable citizens’ capacities of “reading” the crisis (probably the most influential image by now being the flattened bell curve indicating a possible slowing down of the infection rates), but they also are peculiarly paralyzing. For, ultimately, they remain the very ciphers of authority they have always been.

In another, yet directly related dimension of visual politics dwell the devices to track the infection by controlling/invading individual and group behaviour. “Clearview AI” is the telling, Orwellian name of a particularly shady, privacy-violating facial recognition software firm, deployed in the attempts to control the virus. TH 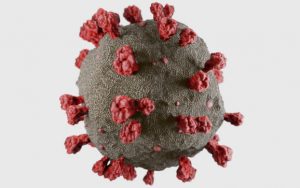 One more obvious problem is media’s usage of the terrifying 3D art based on microscope images of the coronavirus (such as image by Joao Paulo Burini above, used in the article linked here); the battlestar iconography is a safe bet for those interested in engendering “primal” fears and deep anxieties and thus adds to a feeling of helplessness and passivity that is to be contested. TH