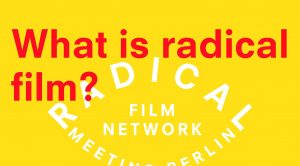 HaFI is cooperation partner of the upcoming three-day event Radical Film Network Meeting in Berlin. We would like to draw your attention to the Open Call “What is Radical Film?” currently running until February 28, 2019.

Continuing the spirit in which the Radical Film Network (RFN) was founded, the first RADICAL FILM NETWORK MEETING in Berlin aims to create a temporary space with the intention of initiating open exchange and dialogue between actors of the Radical Film Network, Berlin filmmakers and cultural practitioners. It will bring together activists, academics, filmmakers and artists in Berlin to jointly answer the question, “What is radical film?“.

In recent years an interdisciplinary discourse has developed around counter images and movement images, covering all areas of cultural life, including theatre, exhibitions, cinema, TV, and the Internet. It consistently attempts to find new means of narration and representation that undermine conventional codes and conventions by opposing, alienating and deconstructing them by offering different methods of representing and interpreting the world. Discussions surrounding the formats and forms of radical film will be the theme of the event, along with finding ideas to recontextualise them, with the aim of proving that oppositional and radical filmmaking is as diverse, colourful and lively as ever.

We welcome contributions from individuals and communities both inside and outside academia, from artists, activists, filmmakers, researchers, scientists and others.

Contributions may include, but are not limited to, the following:

Interested participates are invited to submit one proposal in following format:

Proposals should be kept to a maximum of 1 page (lecture), or 2 pages (workshop), and can be sent in either English or German to: opencall@radicalfilm.net

Limited funds to cover expenses for lecturers, presenters and workshop leaders will be provided. Participants who do not reside in Berlin are eligible to apply for a travel and accommodation grant. The event will be held in English. The programme details will be announced in due course. Please send any enquiries to the above address.