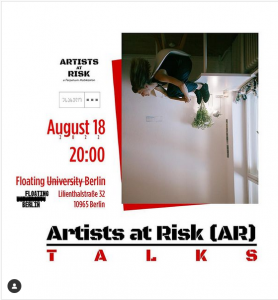 On August 18, 2022, at 8 pm, HaFI resident Marichka Lukianchuk will speak  at series of talks convened by Artists at Risk and Giorgi Rodionov from Untitled Tbilisi at Floating University, Berlin. Marichka will give a talk about her artistic practice during the war and about the dreams of Ukrainians that she collected. She will also share some insights into the film she is currenty working on. There will also be a little audio installation and postcards derived from the dreams.