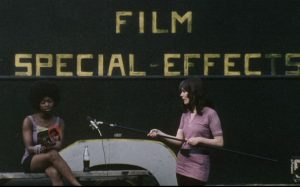 From June 2 to 19, the retrospective of Ingemo Engström’s cinematic work will run at Arsenal Cinema in collaboration with HaFI. The filmmaker worked closely with Harun Farocki in the 1970s, as screenwriter and co-director of ERZÄHLEN (ABOUT NARRATION) (1975) and actress on ZWISCHEN ZWEI KRIEGEN (BETWEEN TWO WARS) (1978). More information about the extensive film program in the presence of the director and her partner and co-director Gerhard Theuring can be found  here, on the Arsenal website.

“The first year group at the Filmhochschule München. Tabula rasa. Any long-held sentimentality about watching films was supposed to disappear, university knowledge shredded, scattered. All that remained was our own work and watching, watching, watching.” This is one of the recollections of Ingemo Engström, born in Jakobstad in 1941 as a Swedish-speaking Finn, in an issue of the film magazine Filmkritik edited by her. She had already studied literature and psychology, with both interests also finding their way into her films. She started studying at the film school in 1967 together with Wim Wenders, Werner Schroeter (who soon left the HFF to go his own way), and above all Gerhard Theuring, with whom she lives and works to this day. Between DARK SPRING (1970), her graduation film, and MRS. KLEIN (1995), she has made eight feature-length films. One of them, FLUCHTWEG NACH MARSEILLE (1977), she co-directed with Theuring, another, ERZÄHLEN(1975), with Harun Farocki. “A life in which working relationships became loving relationships, or vice versa, or both at the same time. And these relationships intervened into real life, they were life itself. This applies to my life-long collaboration with Gerhard Theuring, but also for the less lasting one with Harun Farocki, whose innovations had an effect on me until his death.” Engström calls herself an “auteurist producer”, a “somewhat weathered concept” for her, even though the “craving for freedom and self-determination” linked to this way of working corresponded to her needs. “I always concentrated on each individual project and fought until I had the financing. That meant long waits and occasional poverty”.

Engström’s films produce their own feeling of rhythm and duration. They are connected to one another by motifs (car journeys, bodies of water, music) and recurring actors (Rüdiger Vogler, Katharina Thalbach, her daughter Muriel Theuring). At the same time, they forge mental, cinematic links to film and intellectual history, using images and sounds to contemplate the ideas of Anna Seghers, Klaus Mann, Walter Benjamin, and Annemarie Schwarzenbach or make reference to the psychoanalytical approaches of Melanie Klein und Donald W. Winnicott. The film historical correspondences included in this retrospective extend to films by Kenji Mizoguchi, Alexander Kluge, Robert Bresson, and several shorts; Chantal Akerman and Jean-Luc Godard would have to be added to a more comprehensive series.

The Harun Farocki Institut feels a strong connection to Ingemo Engström and Gerhard Theuring and is happy to show this retrospective of their films in Berlin in collaboration with Arsenal.

More information about the extensive film program in the presence of the director and her partner and co-director Gerhard Theuring are published here, on the Arsenal website.

The retrospective Ingemo Engström was realized within the framework of Archive außer sich, a project of Arsenal – Institute for Film and Video Art in cooperation with Haus der Kulturen der Welt as part of The New Alphabet, a HKW project supported by the Federal Government Commissioner for Culture and the Media due to a ruling of the German Bundestag.