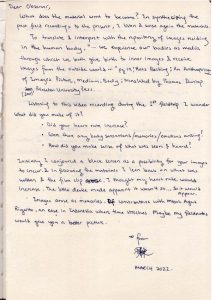 Lim Paik Yin is a visual anthropologist and an interdisciplinary artist working with the camera, and site-specific performance. Her praxis in movement explores the origins of movement and impulses, seeking to find ways to create spaces for people to move in new ways and embark on a journey of self-actualization. Currently, her praxis informs her visual anthropology research by collaborating with artists to visualize their experiences while participating in rituals/performances through film and drawings.

“By using the presence of oneself and transforming everyday space through performance, I can view the self as a separate entity and thus intervene in my everyday routine creating a temporal opportunity to express what is unspoken or hidden.”