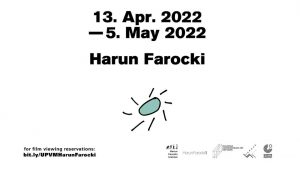 From the UP Vargas Museum press release:

“The first presentation of Farocki’s films in another context begins in the midst of openings and closures. Public health measures recently relaxed, borders restoring their hold of mobility over people; in a metropolitan research university, at a museum whose heritage ranges from making collection to doing experimentation, the Farocki screening is anything but an exhibition of art.

Many of our contemporary conditions have been rehearsed by Farocki as content, style and form in his artistic projects. They surface to be methods and devices that we have come to accept in the rubric of the ‘politics of images.’ This is one way to approach his practice. But what if Farocki’s inscriptions in pictures as well as his discursive editing of cinema’s structure are assembled today to function like a triage that organizes the order of treatment and the entry to further analysis?

Harun Farocki. Screenings is a screening program that takes a singular artistic output to be a system of resonances and descriptions that a new audience can be immersed in. As if a triage, the public that consumes Farocki also screens the vitality of and the need for the artist’s political propositions, sociocultural articulations and historical interventions today. One possible question that they could ask: are we meeting at the same emergencies? Or: can these images be patient of our own understanding of themselves that they will accept coincidence instead of representation, for example, to be a kind of relationship?

Part of Coincidences in Prepositions, a publication program conceptualized to review questions, propositions and solutions that have been set up in the dis/continuities of many colonial milieus, the presentation of Farocki in the Philippines reinforces a theory in the migration of images and screens that the artist had critically deconstructed in his studies of image production: images emerge in our time. In Harun Farocki. Screenings, museum visitors can organize the itinerary of images in a new context. The arrival of underdeveloped and perpetually deficient political images now have a chance to be emergent again.”

Harun Farocki. Screenings is organized by Renan Laru-an and titre provisoire (Cathleen Schuster/Marcel Dickhage), initiators of Coincidences in Prepositions in partnership with the Harun Farocki Institut and the Philippine Contemporary Art Network. Funded by the Goethe-Institut.
The screenings are supported by Antje Ehmann/Harun Farocki GbR.

Harun Farocki. Screenings is open to the public everyday.
Please sign-up here to book your seat in the screening. Kindly await our email confirmation regarding your reservation. 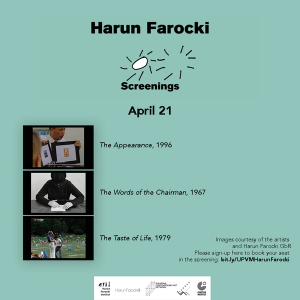 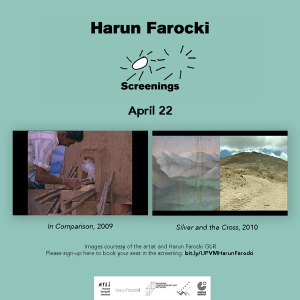 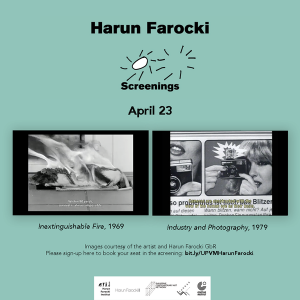 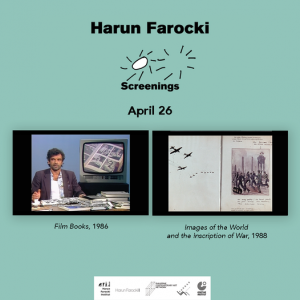 More screenings to come this week and in the week starting May 2 will be announced here and on the UP Vargas Museum Facebook page.