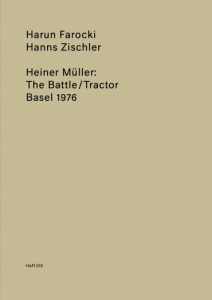 In 1976, Harun Farocki and Hanns Zischler directed Heiner Müller’s plays The Battle and Tractor for Theater Basel. For Farocki, this production remained his only directorial work for theater. With Heiner Müller, however, he remained in intellectual exchange. The two collaborated on the adaptation of Müller’s text The Hamletmachine for radio in 1978; for the May 1981 issue of the magazine Filmkritik, they conducted a conversation.

This booklet gathers together material about the Basel performance. Klaus Völker, then dramaturge at Theater Basel, recalls the background of the performance and compiles some of his notes from the time. A letter written by Heiner Müller to Martin Linzer, a theater critic and dramaturge in the GDR, and Farocki’s text from the program note of the play, as well as photographs of the production, evoke the political and intellectual climate. In the late 1990s, Hanns Zischler wrote a memoir text about their collaboration, which has been translated into English for this issue. Finally, Anja Quickert, a theater scholar, dramaturge, and freelance writer animating the International Heiner Müller Society, contextualizes the documents and reflects on some of the staging ideas of the time.

HaFI 016 is available from Motto Books at a price of 7 Euro.