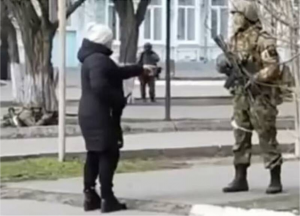 An Ukrainian woman confronts Russian soldiers in Henichesk in the Kherson region. She asks them why they came to our land and urges them to put sunflower seeds in their pockets (so that flowers grow when they die on the land of Ukraine), screenshot from a videoclip disseminated via Twitter, February 25, 2022

How to account for an event as catastrophic as an all-out war next door— soon to be inside the building? How to speak from a place at which, as many assert, “we” failed “you”? How to respond in a timely, critical, empathic way, considering one’s own limitations? How to find a place to speak from and to act in—(not only) for and as artists, cultural workers, researchers, activists, theorists?

This is a time to show support and solidarity with those facing the terror of cluster bombs, shelling, and sniper fire, of days spent hiding in shelters, the utter distress of displacement, the loss of everyday life, the mourning of the dead. Adding to the enormous physical and psychological pain, prolonging and relocating them, the current war is also “epistemological.” Attacks are not only launched against Ukrainian civilians and military (as well as against activists in Belarus, Russia and elsewhere), their homes and their lives, but against their (and “our”) ways of knowing and feeling. Besides being a straightforward war of aggression, this is a propaganda war against truth in the name of “truth,” producing a new “unreality” (Timothy Snyder)—often cynically drawing on the very (deconstructive, feminist, decolonial) criticality that enabled the revisionist engagement with the truth claims of (Western) science and epistemology in the first place. Cognition based on rational choice, evidence, historical erudition, critical reflection, generous discursivity, shared expertise and the knowledge commons is systematically discredited, policed and suppressed by the aggressor. And even beyond the reach of Putinist state propaganda in the name of Russia, a tendency to assert an ultra-presentist now, deplete of any before and after, prepares the ground for decisionist speech and a new normal militarism in the “West.”

The catastrophe in Ukraine marks the irruption of an otherwise routinely disavowed, distanced, and denied reality into an environment sometimes called “Europe,” sometimes called “the West.” This reality of war and violence is always specific, and yet it is also distributed and shared. The experiences of people living, working, fighting, starving, and dying in Syria, Iraq, Afghanistan, Yemen, Gaza, Mali, Sudan, Myanmar, Ethiopia, Mexico, Amazonia, Belarus, and countless other places (and now in Ukraine), are entangled, yet different (and thus in constant need of reciprocal mediation and translation).

While avoiding undue equations, these experiences could and should be brought into relations of solidarity with each other, across time and space. For they are deeply intertwined in histories of colonialism, imperialism, fascism, and racial capitalism. How can we rehearse a vocabulary, and an understanding, for such a solidarity connecting  people across differences in which an “analytics of raciality” (Denise Ferreira da Silva) reveals the inseparability of struggles? Contrary to often misleading policy terms such as “humanitarian crisis” which tend to homogenize situations of conflict, authoritarian rule, the brutalization of minorities, destruction of civil society, blatant absence of humanity, etc., translocal and transhistorical solidarity attends to the specific genealogies and communalities of suffering and survival and the struggles fought to refute and overcome these predicaments.

In 2015, as part of the Kyiv Biennial that took place in the wake of the revolutionary Euromaidan, the annexation of Crimea and the war in Eastern Ukraine, a temporary “School of Image and Evidence” was set up by the Visual Culture Research Centre in Kyiv, “founded in memory of Harun Farocki who kindly agreed to lead the project before his sudden death in 2014.” Participants such as Serhiy Loznytsya, Hito Steyerl, Ruti Sela and Maayan Amir, Artur Zmijewski, Haim Sokol and Nataliya Gumenyuk were invited to contribute to this two-months educational project that aimed “at deconstructing the status of image in current propaganda wars by using film production as an instrument for critical analysis of the war in Ukraine.”

Obviously prescient of the current situation, but also and importantly, critical of Ukrainian mainstream media and politics, the program’s organizers wrote in 2015: “Documentary image production became a defining political factor in the Ukrainian turmoil. While Russia is deploying its forces of information war and propaganda to further its military aggression, Ukraine is responding with attempts to create a propaganda machine of its own. Documentary evidence is becoming hostage to opposing and irreconcilable narratives. At the same time, user-generated online video is profoundly changing the ways the war is documented and perceived.”

Adapting the conceptualization of “film work as a tool for critical analysis of the war in Ukraine and the role of the image in the propaganda machines that instigate it,” we propose to take the lead from the open-ended “Mutual Aid” issue of HaFI’s online journal Rosa Mercedes (RM 02) by way of which we started responding to the Covid-19 crisis almost exactly two years ago. Thus HaFI will open a forum of listening, caring, diagnosing, and connecting. It is supposed to facilitate the publication of probing essays, audiovisual commentaries, dispatches from the war zone, etc., to oppose the epistemological assaults of the current war and the rule of operational images.

The contributions to such a new issue of the journal (RM 05) will attend to the present “frames of war” (Judith Butler)—to the visual and media strategies activated and the ontologies of war deployed by the various state and para-state actors. Particularly as Putin amplified and redirected his own assemblages of “unrestricted,” “liminal,” “hybrid warfare” and manipulative narrative framings—such as the interdiction of using the term “war” rather than the official phrase “special military operation”— when he invaded Ukraine with undisguised, brute force. He thereby proffered a militaristic turn in language and thinking, far beyond the Kremlin controlled media— a new (or rather very old) normal of “strategic” reasoning complete with grandiose geopolitical semantics. The often cited “weaponization of thought” has ceded to be a metaphor, if it ever has been one.

Acting responsibly implies a resolute de-weaponization of language, the carving out of new capacities for affect and reason. RM 05 could develop into a concerted effort of mapping the manifest and potential responses to the crisis (which is very much a crisis of crises) by cultural workers of anti-war, anti-racist, anti-sexist, anti-colonial, anti-capitalist persuasions, inside and outside Ukraine, insisting, among other things, on the possibility of a radical incommensurability of thought, theory, and “action.” This said, it is urgent to not fall prey to the subliminal or open calls for disengagement that will inevitably follow the current breaking news-fueled attention for the war, a disengagement and compassion fatigue that has already caused so many hot wars and so called low intensity conflicts to continue without anyone outside the immediate war zones paying much attention any longer.

Contributions may address (a highly tentative list of possible approaches):

– the current state of the “operational image” (Harun Farocki)
– the visual politics of nationalism and imperialism leading to the war in Ukraine
– the entangled relations of documentary and propaganda
– the tactical and strategic deployment of images in full-on war and in “non-linear” warfare (the type of “hybrid” war waged across various platforms and in many disguises time that preceded the current invasion)
– the translocal and transhistorical dimension of counter-imperialist struggles
– the specific place and role of cultural workers and visual practitioners—from contemporary artists to war photographers—during war in the age of online media
– the production of counter- and anti-operational imagery in response to hegemonic media warfare
– the epistemological operations of post-truth politics and the systemic manufacturing of unreality
– the gender and class politics of the war, and the images they entail
– the ecological dimension of war and how climate change politics and the visual culture of transformation are being affected
– the economy of war—from dark finance to “Kriegswirtschaft”, from a booming arms industry to NFT-funded resistance
– the political and economic asymmetries in Europe and the differences they cause in the ways visual cultures, contemporary art and film, as well as literature and theory are conceived and practiced

The contributions do not have to fit a specific standard or style (however, we will adapt and edit them to conform to the limited design template of our website). You may submit written text, visual essays, podcasts, video and film works, etc. We accept contributions in any language that we ourselves master (preferably English, German, Italian, French), but we’d be ready to publish as well in (or translate from) other languages, such as Ukrainian, Russian, Arabic, etc. Unfortunately, we don’t have the funds to compensate you financially, but we will try to show our gratitude in other ways. Please direct ideas, proposals and requests within the coming weeks (there’s no definite deadline due to the arguably long-term nature of the predicament) to info@harun-farocki-institut.org