HaFI 015: Matthias Rajmann: Back and Forth 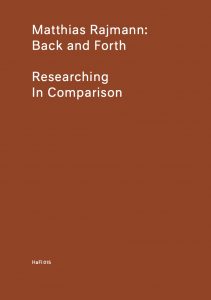 Harun Farocki’s films, TV programs, and installations have always been the result of collective labor. This is particularly true for the excessive amount of research and logistics behind many of Farocki’s works. Between 2001 (The Creators of the Shopping Worlds) and 2014 (Parallel), Matthias Rajmann was conducting the substantial research process, sometimes in addition to being the sound man and executive producer.

Rajmann’s collage of selected emails published in this booklet, sparsely intercut with excerpts from Farocki’s replies, provides insight into the investigative enterprise behind Farocki’s two-channel, 16-mm installation Comparison via a Third (2007) and its cinematic version In Comparison (2009). Covering a period of over two years, the correspondence shows how the exchange between Rajmann and Farocki—and Rajmann’s various correspondence partners—gradually shapes the initial idea laid down in Farocki’s project description from January 2003: “On the basis of specific examples the construction of residential buildings will be compared.”

HaFI 015 is available from Motto Books at a price of 8 Euro.