A Film by Skip Norman

1. The development of an art form amongst oppressed blacks. This art form, the Blues, always displays the relationship of blacks to American society.

2. The sexual myth, which has contributed to the oppression of black people and white women in American society. Both the black man and the white woman are witnesses to this sexual myth, created by white patriarchs (the capitalist = the chauvinist), in order to maintain control of social development and people’s fate.

There are four main elements which mediate the film’s intentions: music, text, stills, and black film.

a) The music is a classic example of the extent and the development of an art form which was developed as a reaction of the blacks to racist America. This music reflects the precise scale of the psychological, sociological, cultural, and political dependency on American society, and it documents the politico-economic conditions and aspirations of the blacks. There are four songs in this film: A “Field Holler” which was sung by slaves when working; a “Prison Song,” which was sung by the black prisoners on the galleys; a Blues, which represents the blacks’ confrontation with industrialization.

Sung by the “Queen of the Blues”: Bessie Smith.

b) The text expresses the typical helplessness that a non-white man and a white woman experience when they fail to understand the myth of oppression.

c) The stills of the victim are evidence which documents the crimes of the white patriarch.

e) The passages of black film engage directly with the viewer. They have the task of heightening the viewer’s receptiveness for the film’s statement.

Although each element stands on its own from time to time, in combination they carry the core of the message.

With Blues People an attempt has been made to give cinematic expression to the various layers of non-white psychological, sociological, cultural, and political dependency on white America. (Skip Norman)

Press quote: “This is a black-and-white film in every respect. Its problem is the problem of black and white (the races), it shows black and white people (more precisely: a black man and a white woman), and it shows what it shows in black and white images, not in the usual black-and-white, but literally in black and white.
… Norman grabs the race problem where it is rooted: between the legs. And he is no longer willing to sublimate the centuries-long, sexually rooted oppression of his race by the whites, in art (= Blues). His film employs the most effective means, pornography (which in this case is exactly the right means) to call for ‘Black power.’
It is rare that a film is so dialectically correct.” (Jochen Schmidt in “XVth West German Short Film Festival Oberhausen 1969 – Report”)

“For me the strongest film, not just of the German program but the festival as a whole, was Blues People from Skip Norman. … (He) has succeeded where even great filmmakers such as Murnau or Eisenstein have only succeeded in rare cases. Norman juxtaposes contradictions, not in order to sublate or resolve them, but in order to make an age-old injustice and a great divide sensuously and concretely understandable. The sound and texts of the Blues provide the film’s atmosphere, giving it an aura of mourning and melancholy. With his film Norman performs an operation: he releases the aggression residing in the Blues. To do this the director employs an advanced symbol: the relationship between a black man and a white woman. This has nothing to do with pornography, Norman could not have selected any other images, they are legitimate through and through. It is only through this radicalism that it is possible to make clear that even the union of two people cannot resolve the socially and politically determined divide between the races. Blues People can only be an agitational film. However, the call to action is formulated with exceptional lyrical power and sensitivity.” (Ulrich Kurowski in Jugend Film Fernsehen, issue 2/69) 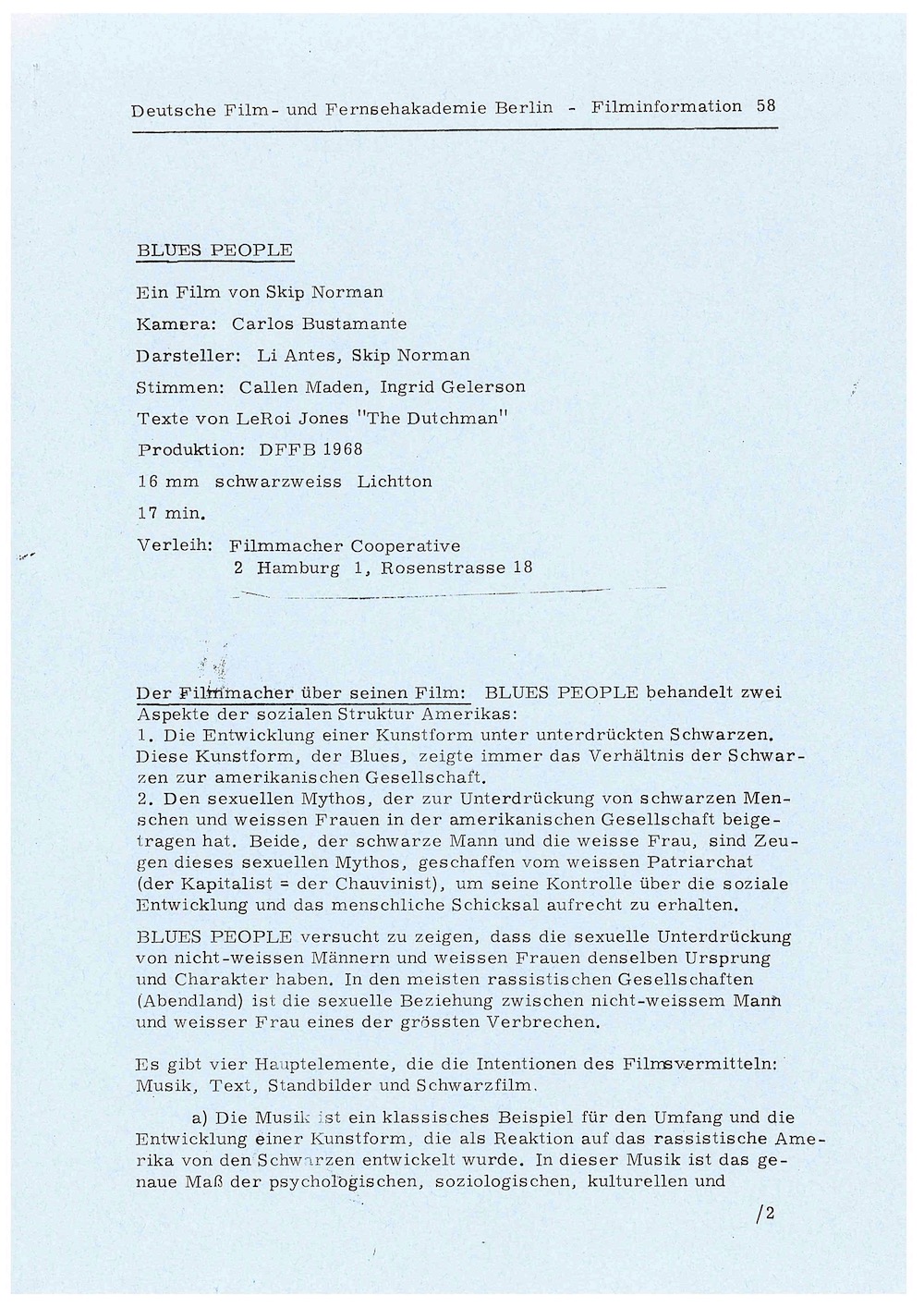 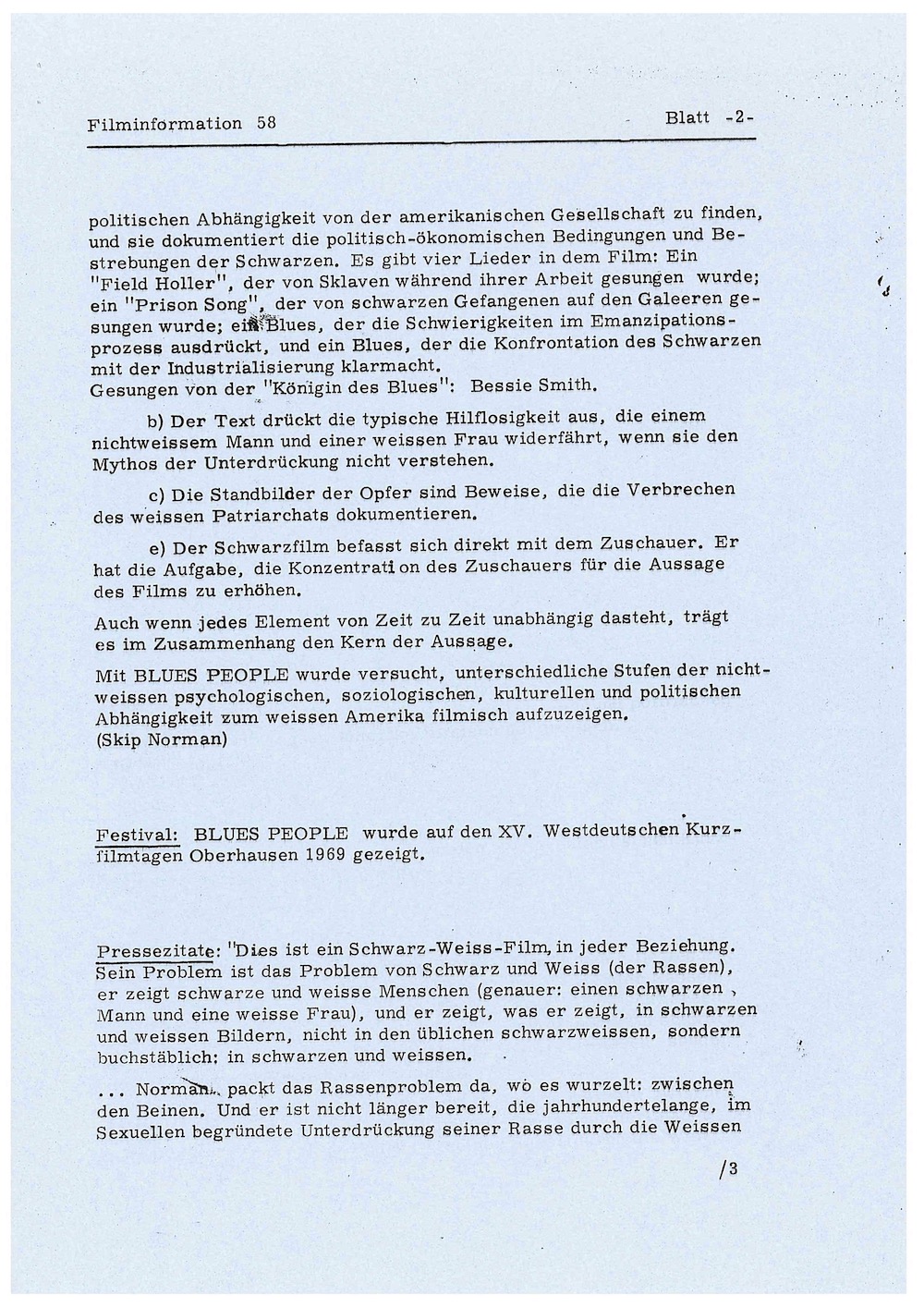 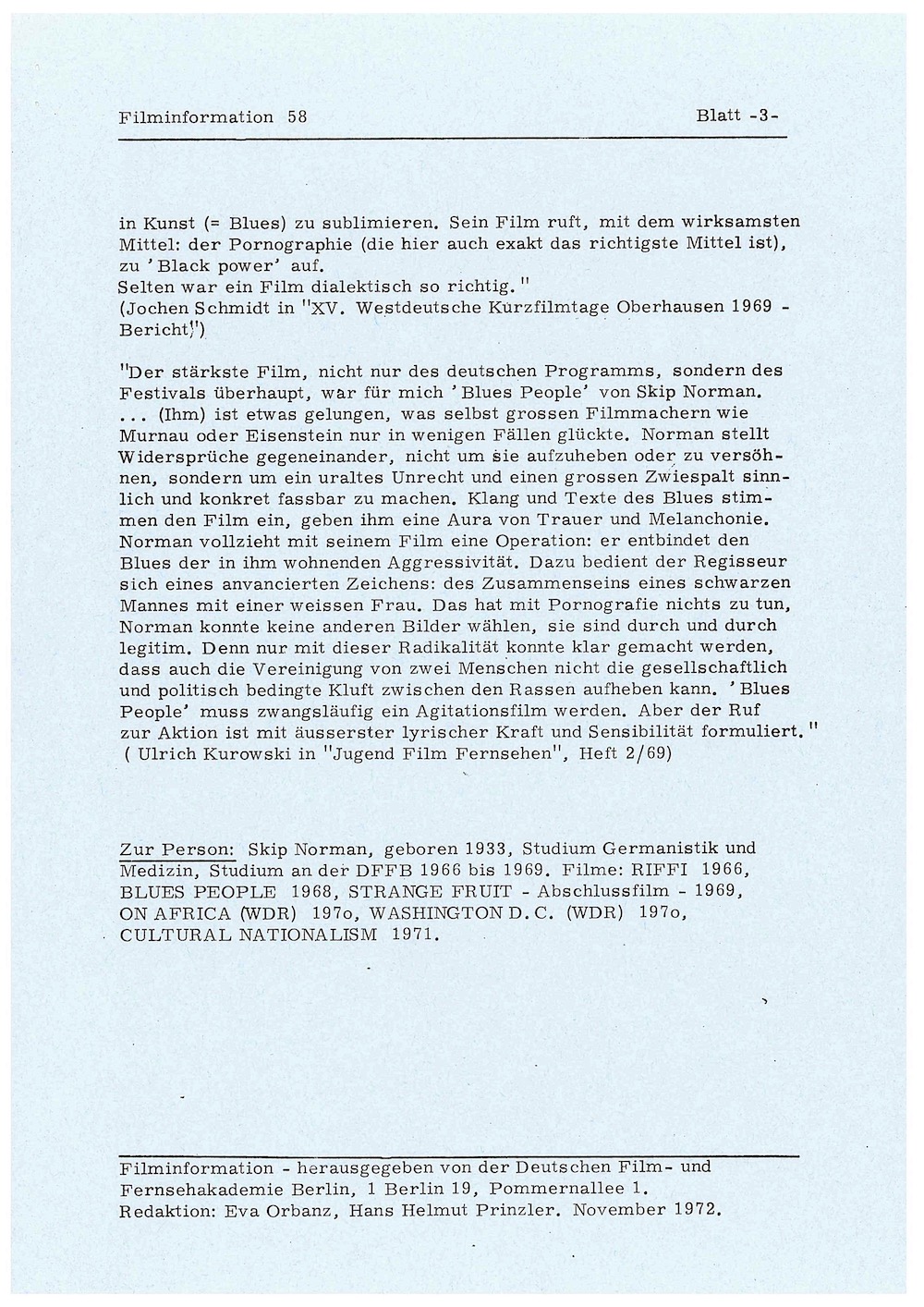