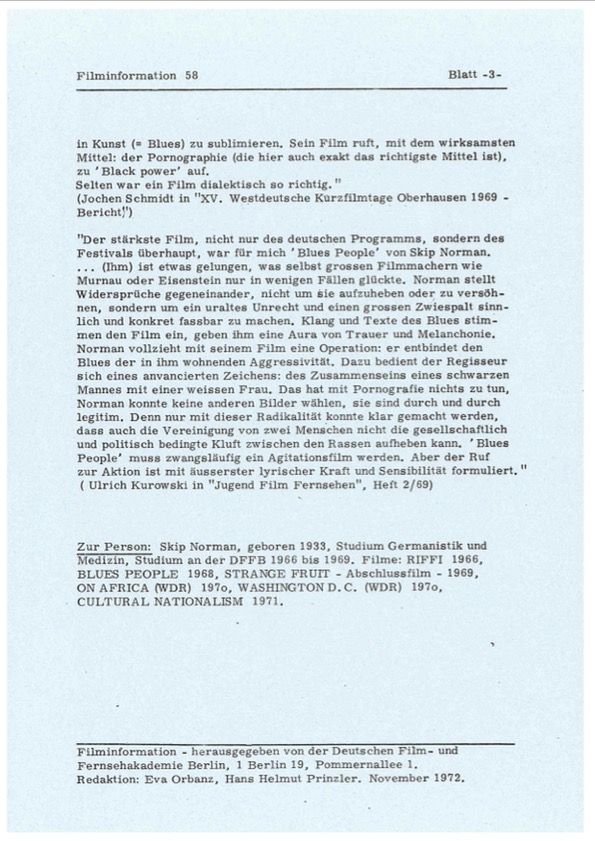 In a document compiled for the eighteenth birthday of the Deutsche Film- und Fernsehakademie Berlin (DFFB) in 1984, Skip Norman lists the festivals where the films he directed were screened. Apart from the Internationale Kurzfilmtage (International Short Film Festival) Oberhausen and the Internationale Filmwoche (International Film Week) Mannheim, where Blues People (Oberhausen, 1969), Cultural Nationalism (1972), Strange Fruit (Mannheim, 1969), and On Africa (Mannheim, 1970) were selected, “Cinestud Amsterdam”—a festival focusing on student films—also showed Blues People and Strange Fruit. Interestingly, Norman also notes that the 1971 Festival in Leipzig gave an “honorable mention” to a film called Bobby Seale in Copenhagen – arguably an alternative title for Strange Fruit. The Oberhausen screening of Blues People in 1969 attracted a lot of attention. In his review for the Jugend Film Fernsehen (JFF – Institute for Media Education in Research and Practice), Ulrich Kurowski wrote: “To me, the strongest film, not only in the German competition, but in the entire festival, was Skip Norman’s Blues People. He succeeds in something that even great filmmakers like [F. W.] Murnau and [Sergei] Eisenstein only rarely achieve. Norman juxtaposes contradictions not to suspend or reconcile them, but to give a concrete and comprehensible form to an age-old injustice and a big cleavage.”