During his years as a student at the Deutsche Film- und Fernsehakademie Berlin (DFFB) between 1966 and 1969, Skip Norman was as prolific a cinematographer as he was a director. Helke Sander’s Break the Power of the Manipulators, Harun Farocki’s White Christmas and Their Newspapers, Ulrich Knaudt’s Our Stones, all of them made in 1967/68 in the context of a campaign against Axel Springer’s publishing house and its flagship publication BILD-Zeitung, are only a few of the examples. After his diploma and two self-produced films in 1970, he continued working as a cinematographer, maintaining close working relations with Jonathan Briel, Horst Schwaab, and other DFFB-alumni. After returning to the USA in 1975, he worked with Haile Gerima and Michelle Parkerson, among others. The following is an incomplete list of films shot by Skip Norman in and after 1970: Kohlen für die Naunynstraße (Horst Schwaab, 1970); Ein sonderbarer Fall von Liebe (Jonathan Briel, 1972); Kennen Sie Fernsehen? (Malte Ludin, 1973); Warm-Ups (Allan Kaprow, 1975); 1 Berlin Harlem (Lothar Lambert & Wolfram Zobus, 1975); Wilmington 10 – U.S.A. 10,000 (Haile Gerima, 1978); … But Then, She’s Betty Carter (Michelle Parkerson, 1980). 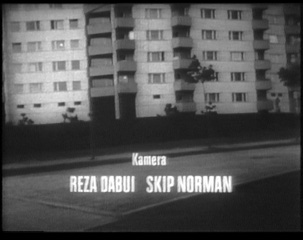