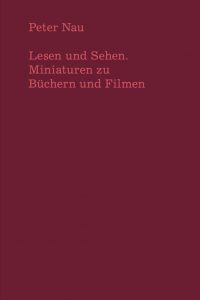 “In reading a book, in watching and listening to films, we become the resonating body and screen for something outside ourselves. What it is about is the magic of regaining our participation in the totality of the world. Every individual who does not want to succumb to prosaic desiccation strives, through this or some other means, to bring himself into a conscious relationship with that which he knows to be stronger than himself.” (From the afterword)
The miniatures on books, films, and paintings are framed by two longer walks in which the inner and outer landscapes are superimposed.

The book can be purchased from Synema here and Motto Books here.