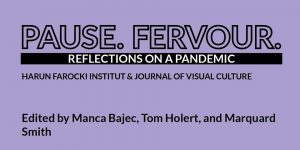 To celebrate our recently published reader Pause. Fervour: Reflections on a Pandemic (edited by Tom Holert, Manca Bajec, and Marquard Smith), a collaboration between Harun Farocki Institut and Journal of Visual Culture, we organize together an online event on: