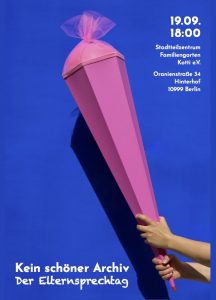 As part of HaFI’s cooperation with Kein Schöner Archiv (Michael Annoff/Nuray Demir), which has developed around the exhibition and research project Education Shock. Learning, Politics and Architecture in the 1960s and 1970s at the Haus der Kulturen der Welt, we would like to draw your attention to the next KSA’s Elternsprechtag (Parents’ Day), which will take place on: