Pause. Fervour. Reflections on a Pandemic – Journal of Visual Culture/HaFI reader out and ready for download! 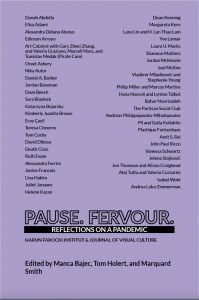 Please scroll down to the bottom of the page to download the book!

Initiated by the COVID-19 crisis, Pause. Fervour. Reflections on a Pandemic is a collaborative effort by the Harun Farocki Institut, Journal of Visual Culture, and all the project’s contributors.

The call was sent to Journal of Visual Culture’s Editorial Board, and a wide selection of previous contributors and members of its extended communities, describing the task as follows:

‘The SARS-Cov-2 crisis is, will be, and will have been so many things – a disastrous event of unknown scale, an individual and collective tragedy, a historical turning point, a huge biopolitical experiment, and so much more.

At the same time, attempts to act responsibly, caringly, solidarily in the face of this global catastrophe are overwhelming. The planetary dimension of the crisis seems to put everything into question, likewise affecting the knowledge production, visual practice, critical theory, political organizing, scholarly enterprises, research communities to which we are committed (and which are experiencing existential and epistemological shockwave after shockwave on a daily basis).

There is a lot of spontaneous, ad hoc opinion-making and premature commentary around, as to be expected. However, the ethics and politics of artistic and theoretical practice to be pursued in this situation should oblige us to stay cautious and to intervene with care in the discussion.’

As one of JVC’s editors put it in our informal conversations: ‘We are not looking for sensationalism, but rather, moments of reflection that: make connections between what’s happening now and the larger intellectual contexts that our readership shares; to offer small ways to be reflective and to draw on tools we have and things we know instead of just feeling numb and overwhelmed; help serve as intellectual community for one another while we are isolated; support the work of being thoughtful and trying to find/make meaning…which is always a collective endeavour, even if we are forced to be apart.’

As we were forced to be apart, joining forces in this collective endeavour made this a project in mutual aid.

The 48 contributions were published online in the Harun Farocki Institut’s journal Rosa Mercedes 02. The first appeared on 30th March 2020 and the 48th appeared on 1st March 2021. Each was submitted, edited, designed, and posted within 24 hours, giving a real-time sense of the current crisis as it unfolds, and our reflections on it. In this publication these same 48 contributions are arranged into four thematic sections on: the pandemical logic of very late capitalism; lockdown life; biopolitics and governmentality; and new ways of caring.

Equal part powerful and moving, angry and heartbreaking, righteous and desperate, hopeless and demanding of a better future, together this polyphony posits if not an actual antidote then certainly abundant curative reflections to the disease and ways we might navigate this ongoing crisis.

Pause. Fervour. Reflections on a Pandemic is co-published by the Harun Farocki Institut and Journal of Visual Culture, designed by Simon Pavič, and edited by Manca Bajec, Tom Holert, and Marquard Smith, 245 pages, self-published (by JVC and HaFI), ISBN 978-1-5272-9544-5