From time to time, Deutsche Film- und Fernsehakademie Berlin (DFFB), where Skip Norman studied film between 1966 and 1969, conducted surveys among their alumni. This one, entitled DFFB “volljährig” (DFFB “adult”) was published in 1984 at the occasion of the institution’s 18th birthday. It mainly consists of filmographical data and answers to specific questions that the alumni handed in. The questions were sent in German, we translated them for this republication.

If the work of an independent is acceptable to the cultural gatekeepers (those who decide who gets money and how much), money is available. If the work of an independent is not acceptable (and this is not always a question of skill or competence), money is, obviously, not available. Although there is no direct cultural censorship, independents, nevertheless, walk a cultural tightrope because of the ethnocentricity of the majority culture. And most decisions in these agencies, that broker the little money available, are made by members of the majority culture. They are the ones with the decision-making jobs.

Although independent production is painful, frustrating, time consuming and exploitative, it provides the only avenue for the expression and advocacy that can be free of the onus of making money. But this also points to the fruitlessness of independent productions, because many films end up on the shelfs and in the closets of their makers for lack of exhibition and distribution possibilities. The biggest challenge for the independent is the making of a film that, because of its dynamic strength as a communications vehicle, demands to be seen.

I teach filmmaking and study culture as an ethnographer.

Bist Du berufsständisch oder gewerkschaftlich organisiert?
Are you organized in a professional association or a union?

Welche Erfahrungen hast Du mit Video gemacht?
What experiences do you have with video?

I have some experience in using video as a tool for teaching industrial skills and social values.

No, I have not worked for Television since leaving Berlin. 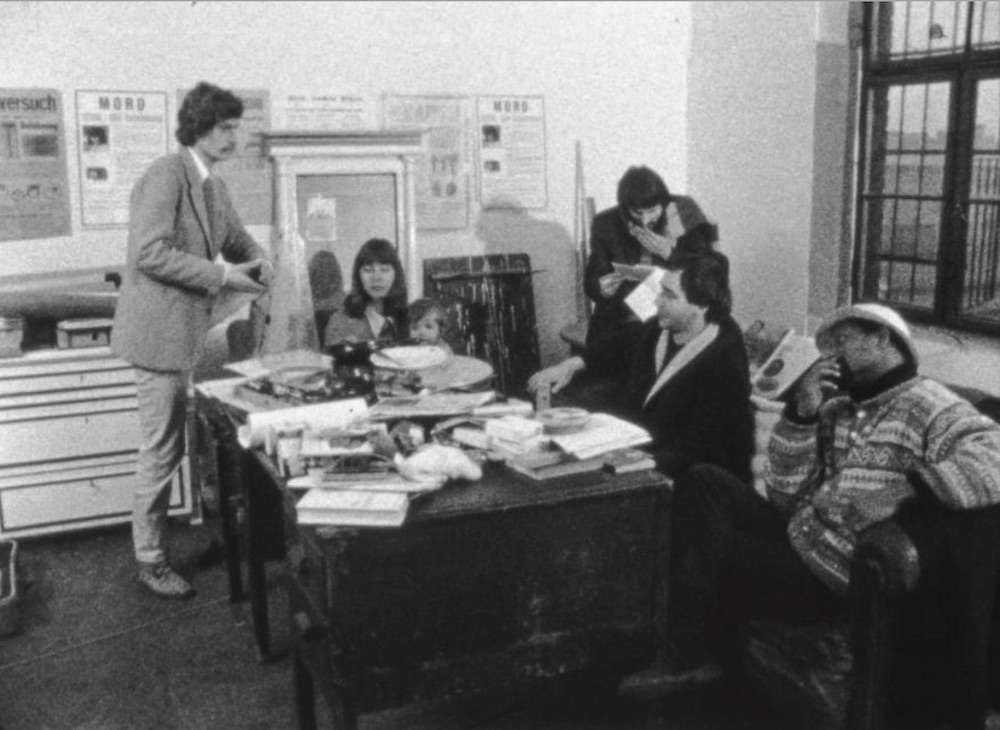 Still from Situationen (Johannes Beringer, 1967) showing some of the DFFB students of the “Class of 66″—Holger Meins, Günter Peter Straschek, Gerd Conradt, his wife Lena and their child Alfa, and Skip Norman.

The most important aspects of my education at DFFB were the availability of practicing professional as instructors, equipment and money. I, personally, found the rather eclectic study program of my class beneficial, because it helped to define the kind of independent production in which I am presently involved. But I think that students should be offered the opportunity to satisfy their specialized interests, e.g., feature filmmaking, documentary filmmaking, ethnographic filmmaking (a program that should be developed and expanded in the near future), animation, experimental filmmaking, didactical filmmaking, film education, film theory and film criticism. There are many ways in which film and video can find ways into the socio-cultural structure of society and a film school should not be restricted to a few popular and available choices. Apart from a solid foundation in the essential skills of filmmaking, which should be demanded of each Student, DFFB should broaden its potential for providing avenues for its students to use those skills. This can only be done when film is seen as more than entertainment or advocacy, but also an instrument for studying culture and society.

Gibt es in Deiner Berufspraxis Zusammenarbeit mit Absolventen bzw. Akademie-Studenten?
Do you collaborate with graduates or academy students in your professional practice?

I hope to continue my working relationship with Jonatan Briel.

I believe that ideas are a product of reality. If Utopia is understood as a synonym for wishful thinking then Utopias exist. Filmmaking is a concrete, complex process and its successful execution, in spite of the magic inherent in the making, demands the confrontation with real ideas, real people and real technology. Although completing a film project may seem utopian to the uninitiated it is nevertheless a product of cold, hard, facts. Now there may be some wishful thinking in the creative process, and if so, it has got to be clothed in planning, skill, creative initiative, political awareness and hard work. There are no Utopias that are not rooted in reality.

Was machst Du, wenn Du keine Filme machst?
What do you do when you are not making movies?