This is the forty-fifth instalment of a collaborative effort by the Journal of Visual Culture and the Harun Farocki Institut, initiated by the COVID-19 crisis. The call sent to JVC’s editorial board, and a wide selection of previous contributors and members of its extended communities, described the task as follows: “There is a lot of spontaneous, ad hoc opinion-making and premature commentary around, as to be expected. However, the ethics and politics of artistic and theoretical practice to be pursued in this situation should oblige us to stay cautious and to intervene with care in the discussion. As one of JVC’s editors, Brooke Belisle, explains: ‘We are not looking for sensationalism, but rather, moments of reflection that: make connections between what’s happening now and the larger intellectual contexts that our readership shares; offer small ways to be reflective and to draw on tools we have and things we know instead of just feeling numb and overwhelmed; help serve as intellectual community for one another while we are isolated; support the work of being thoughtful and trying to find/make meaning…which is always a collective endeavour, even if we are forced to be apart.'” TH

As COVID-19 spread like wildfire in the US, we assembled in April to begin sharing out our burning questions about living our dying on a dying planet—a scene Jill Casid has reframed as the Necro-scene.[1] In part, we first came together two years before in Casid’s seminar “Necrocene, Necropolitics, Necrolandscaping.” In September, as we regroup to assemble our questions, wildfire is burning through the West Coast, and it is no metaphor. We are a group of artists, scholars, students, friends, strangers, queers, trans, straight, marginal, privileged, reliable and/or inconsistent humans, each with a singular non-exclusive constellation of attributes, who share having Casid as a teacher, advisor, or friend. We have been confined to our homes largely since the declaration of the pandemic on March 11— that same day and without much anticipation the University canceled all in-person instruction. We met online Friday between 4 and 6 pm CT throughout the summer, welcoming friends and colleagues to reimagine a collective study animated by questions as an affective structure of sustenance and Mutual Aid. We use “mutual” not as a mere qualifier of “aid,” but as a challenge to its implied hierarchy, blurring the distinction between who gives and who is in need with the oscillating ambiguity of gift and debt. This inquisitive survival pivots on, thus, not why this world is falling apart, but the role of the unresigned question in world-making otherwise.

We came together to question the collective delusion in which the Virus materialized as an invisible but concrete presence. We shared our experiences confronting a new choreographic imperative that, in line with Harun Farocki’s method, illuminates what had remained invisible in plain sight like the droplets of a sneeze. The Virus exposed and magnified the deep-rooted pandemic criminalization and marginalization of Black, Indigenous, and Brown people; as “essential” workers and those warehoused in nursing homes, prisons, meatpacking plants, whose lives were already deemed disposable.[2] Our meetings were punctuated with the urgency of joining the frontlines to protest, to stand against police brutality, and confront the largely underscrutinized consumption of black suffering as spectacle. The Virus, with its spiky sovereign crown, also crushed our fantasy of being harmless and irreproachable, not only as we unknowingly touched on each others’ sensibilities regarding suffering and death, but also as we considered the possibility and risk of being contagious, of exposing our loved ones with our affection. We renounced the comfort of looking for answers to open space for radical questions notwithstanding fragile internet connections. What follows is an exquisite corpse of the burning, consuming questions we shared as we explored ways to sustain each other amidst radical ruptures and uncertainties—that for some of us were already a condition of existence. Using a hundred words as a limiting constraint, we offer you our questions as a strategy of cognitive emancipation and resistance to the rampant and contagious disinformation going viral. In an effort to extend this inquisitive survival as mutual aid, we ask you, which are your burning questions, would you share them with us? — Fernanda Villarroel 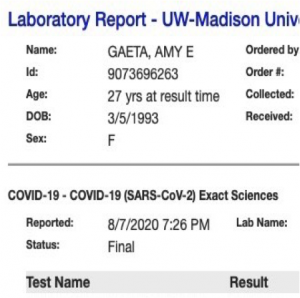 Your mask doesn’t protect you; it protects others from you. You don’t lack symptoms; your symptoms are invisible. You’re not self-isolating; You’re hosting. Your healthy, the normal, hurts me, us, a world. Crip theory has proposed the “disability to come” as all our bodies break down naturally, further unevenly broken down by heteropatriarchal racial capitalism.[3] In the wake of the Virus, we may embrace the infection, the disability that has come. How might this crip orientation, living in our universally infected bodies as a mutually constitutive infrastructure, incite an ethics based on renouncing complete bodily autonomy that may help us collectively sustain amid unsustainable conditions? — Amy Gaeta 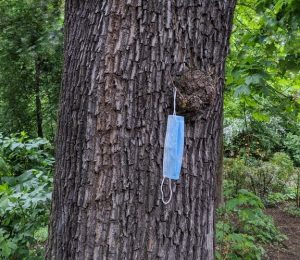 “The hunting Shabah” is frequently used to describe the Covid-19 pandemic in Persian and Arabic headlines. The word Shabah, colloquially used to mean specter, etymologically connotes the remaining essence or soul after something has been unveiled. Following this analogy of the hunting specter of Covid-19, and thinking about the “model” it may provide as an essential structure of the contemporary world, I suggest that the idea of the “necro- cybernetic” has a significant explanatory value for the present crisis: death being in a circular-causal relationship around the world. This further allows us to ask how the necro-cybernetic model alters our perception of the paradigm of local/global as an established historical and political model in international relations. —Saeedeh Asadipour 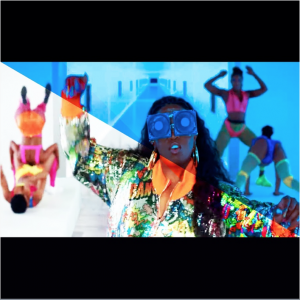 The jawdrop recognition. The smackmark of the present. That feeling of future but they couldn’t have known… I am obsessed with art that anticipated the pandemic: art about contact and breath denied, art that made do without air or touch. I’ve rejected chance and pray instead for destiny — John’s kind,[4], the fate that coexists with freedom by slipping the rules of linear time: “I did this now because it would become true.” Artists mediate between worlds and eras, but so do prophets and Cassandras. Enough with orders. Enough awaiting. Past, Present, Future: who’s leaving now? Take me with you. — Anders Zanichkowsky 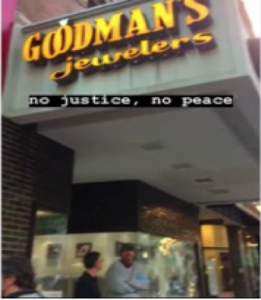 Temporary image circulating on Instagram of a broken storefront after protest in Madison, WI. 2020.

Images of protest amplify how my relationship with my grandmother who fled Germany as a refugee just before Kristallnacht ignites my affinity with those who pursue anti-racist work in other diasporic contexts. How might the performative potential of a punctum in an image of broken glass from a jewelry store following a Black Lives Matter protest (which undoubtedly brings attention to longer histories of extractive capitalism that causes and amplifies anti-blackness) elicit a queer sense of intimacy by also operating as a material metaphor for the haunting presence of other diasporas that are still not done? —Michael Feinberg 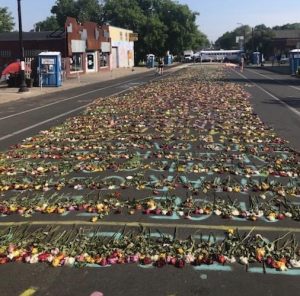 The names of people murdered by police written on a street and covered in flowers. Minneapolis, MN, June 8, 2020. Photographer: Jenna Hoelz

The pandemic, the racist state, the wildfire. To state the obvious, the language we use for these things is neither fixed nor inconsequential. The past few months have, it seems, witnessed an osmosis of rhetoric, a shift in a public discursive equilibrium that augments the coefficient attached to death while diminishing the one attached to life. What is the role and responsibility of language in this process, and how can we use language as a tool of consciousness raising toward the creation of shared spaces of safety and refuge, moments for memory and respite, and chances to breathe? — Luke Urbain 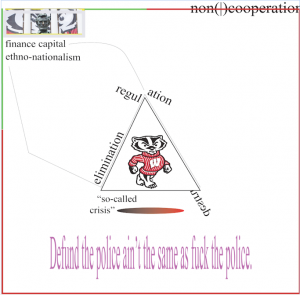 Diagrammatic interpretation of the university:last words, a text supplement to a conversation of the same name lead by Stefano Harney and Fred Moten and hosted by FUC (striking graduate students in the University of California system) on July 9th, 2020, in which the authors discuss, among other things, the end of the university as situated within (neoliberal) regulation, (fascist) elimination, and (abolitionist) destruction. Phrases quoted from text. Bucky Badger iconography open-sourced from the University of Wisconsin-Madison.

“Being post-medieval doctors in good standing, we bleed the university in order to keep alive what we would kill.”[5]

“So-called crisis” unveils what already exists (Moten and Harney 2020). In the University, that often becomes grounds for the game of apperception engulfing on particularities. I read, emitting Boggle — in so many words — via Wisconsin. That’s usually eventually — but rarely — salaries. However, it’s okay to have Game Night once in a while, because it allows us to socialize. Using wrinkles to toggle dry light. You pull the “I” into ROT. Rot the Uni. That’s quite alright. Next: how to leave dry abolishment’s leech? — Luke Leavitt 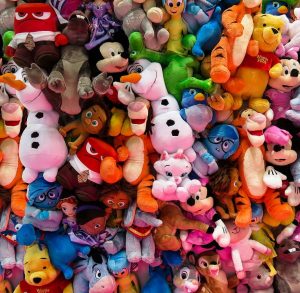 I follow Birthstrike activists—withholding their labor, childless. Always-already-mothers were it not for environmental catastrophe. The specter of the childless woman is the specter of death amongst the population. Genocide by fossil fuel. I am trying to make sense of their unfertilized eggs, to decipher an activist “fungus” of sorts, growing in their wombs to bear a fruit of another purpose. Solastalgia leading them to “mother the earth.” Woman-as-womb. SavetheChildren. Do-it-Yourself. Build-a-Bear. Make-a-Family of non-biogenic-kin whose precious presence might provide needed love and necessary re-kin-dling. If I commit to an ethical now, who will care for me if I grow old? —Alexandra Lakind 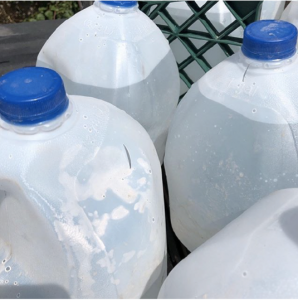 “Border Patrol also stabbed all of the gallons in the back of a truck that was at Byrd Camp during the raid. Attacks on our work are attacks on people crossing the border. Irreparable damage was done to those who sought aid in our camp. #nomoredeaths #humanitarianaidisneveracrime #borderpatrolkills #usmurderpatrol #nomasmuertes.” @nomoredeaths_nomasmuertes on Instagram. August 6, 2020. Tucson, Arizona.

To be an immigrant in the US-of-COVID-19 hurts. There was no stimulus package for US, there was more deportation for US. More kids in cages of US. Concentration camps of US. ICE threats of deportation of US. Blaming the virus on US. Banning US. Being scared of the white unmasked, the ones with rifles. As always, all cops are bad. But kill the cop inside first. Fuck the Police State. But don’t let us die just yet. Let us dance one more time first. What does power look like when we can’t see each other’s face? — Malú Machuca Rose

Death Class is an open collective of artists, scholars, students, friends, and strangers, all from a variety of backgrounds and orientations, each with a singular non-exclusive constellation of attributes. We first met in Jill Casid’s seminar “Necrocene, Necropolitics, Necrolandscaping” in Spring 2018 at the University of Wisconsin-Madison. We regrouped in Summer 2020 as COVID-19 stopped the world, welcoming new interlocutors to share our burning questions to cope with, in Casid’s words, “living our dying on a dying planet.”

Contact point for any questions or comments for any of the authors or the group: Amy Gaeta (she/her) amylizgaeta@gmail.com