This is the forty-first instalment of a collaborative effort by the Journal of Visual Culture and the Harun Farocki Institut, initiated by the COVID-19 crisis. The call sent to JVC’s editorial board, and a wide selection of previous contributors and members of its extended communities, described the task as follows: “There is a lot of spontaneous, ad hoc opinion-making and premature commentary around, as to be expected. However, the ethics and politics of artistic and theoretical practice to be pursued in this situation should oblige us to stay cautious and to intervene with care in the discussion. As one of JVC’s editors, Brooke Belisle, explains: ‘We are not looking for sensationalism, but rather, moments of reflection that: make connections between what’s happening now and the larger intellectual contexts that our readership shares; offer small ways to be reflective and to draw on tools we have and things we know instead of just feeling numb and overwhelmed; help serve as intellectual community for one another while we are isolated; support the work of being thoughtful and trying to find/make meaning…which is always a collective endeavour, even if we are forced to be apart.'” TH 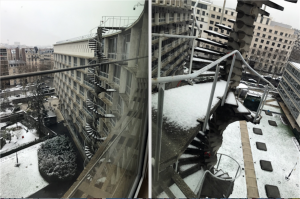 A precarious-looking exit stair (no longer the primary means of emergency egress) at Breuer, Nervi, and Zehrfuss’ UNESCO Headquarters Paris, 1958; photograph by the author, January 2019.

How do we get out of here? That is the substantive question, embedded with fear and panic, when a house is burning, a ship is sinking. When I was 18, I woke up to a house on fire, literally. I had just returned from a long trip abroad; the fire started from a poorly ventilated clothes dryer, which my mom and I had been using all day, emptying my suitcases into the laundry. It was a wood frame house, and the fire spread rapidly. I was wakened by an alarm, in my sleepiness and jet lag I thought it was just my bedside clock, I flailed my arm around trying to turn it off. I pressed the button but it kept going. That was when I noticed the smoke creeping in under the door. Stupidly, I opened the door, and faced a wall of smoke, waiting to come in and take over. The coughing started, the panic, nowhere to go. I went further away, into the bathroom. Stupidly again, I opened the window to get a gulp of fresh air, this created a chimney, drawing the smoke into the room and out the window. Now the panic was urgent. I had to get out, the threat of asphyxiation was real. I crawled out the window, perched on the narrow ledge, and jumped the 20 feet or so to the ground. A few minutes later the fire trucks and ambulance arrived, I was given oxygen and a brace for a minor ankle sprain. I escaped, largely unscathed.

Our lives, our fear of death, are configured by the prospect of urgent egress. We rest knowing we can get out. An emergency is, hopefully, just another event. The ever-present prospect of being elsewhere; and carefully detailed mechanisms for escape. The poet Ocean Vuong points out the obvious: walking through lower Manhattan, or many other dense, townhouse laden urban areas, the façades are stringed with“fire escapes”; as he wrote:

I could spend a whole hour sitting across the street from a six-floor walk-up studying the zig-zags that cling to a building filled with so many hidden lives. All that richness and drama sealed away in walls echoing with elemental or exquisite language – and yet only the fire escape, a clinging extremity, inanimate and often rusting, spoke – in its hardened exiled silence, with the most visible human honesty: We are capable of disaster. And we are scared.[2]

A capacity to leave takes up the city scape, as a kind of background hum to the life of the city. It is there when we need it.

How do we know when it is an emergency? That seems like a nonsense question today – though in the US, one could be forgiven for some confusion, even though almost two hundred thousand people have died many are operating as if the most important thing to do is pretend that all is normal, to keep the economy moving. To build a scaffold around the pandemic, and the panic, to hide it away. And yet. If we have reason to panic, what do we do with it, where do we go? Again, how do we get out of here?

My own experience of being saved, of saving myself, in an emergency is perhaps extreme, a clear distillation of an everyday event, of an ongoing condition: we rely on our capacity to leave in order to stay comfortably. Buildings are constructed around urgent egress, often quite literally: the exit stair is not always clamped on to the facades, it is hidden in the interior, an ugly, exposed concrete passageway winding around or next to the elevator core. Mies van der Rohe wanted to sheathe the exit stair of the Seagrams tower in the same marble he used in the lobby, but was denied. Marcel Breuer managed a more spacious, detailed stair at the Whitney, because it doubles as an alternative to the elevator in order to reach the gallery – his spiral exit stair at the UNESCO building is an exercise in precarity (there is now an internal one as well). Farshid Moussavi’s exit stair at the Cleveland MOCA is shining, neon yellow, and doubles as a gallery for sound art. A spectrum of attention and opportunity.

Our crisis today, the pandemic, is characterized by a turn inward, a reliance on our interiors, even more than before, as havens, spaces for solace and refuge. For safety. Unwittingly, we are depending on emergency exits even more – we are inside all the time, or should be, and only can be because we know there is a way out, if needed. At the same time, the outside, exterior life, has itself become dangerous: the virus, the maskless, violating orders or the common sense imperative to shelter in place. Where can we go?

This dynamic between safety in the interior and threat outside is already, for those paying attention, a familiar formula – the relationship between our conditioned, ventilated interiors and the inexorable rise of carbon emissions is, somehow, an even more avoidable connection, a crisis too many continue to largely ignore, even more as we turn to those ventilation systems to keep our schools, offices, and homes free from infection. The sense of panic grows, the recurving of the essential, infrastructural patterns that will keep us on a path towards disruption, destabilization, and the destruction of familiar ways of life. The pandemic is not just a preview to the social discord expected amidst climate disruptions, it is an engine for it, a hardening of reliance on patterns and systems that are unsustainable.

So this is one way the pandemic, and the climate crisis it is masking, hiding, obscuring, reconfigures our ways of life: there is nowhere to go. For the global industrial culture reliant on the emergency exit, on the externality, there has always been a place to go, a place to move a factory as environmental regulations tightened, to mine ores or dump toxins; to hide profits in offshore accounts. But the virus is everywhere. And we can’t escape the climate, we jump out the window and there it is, the closed loop turning back onto us.

Can we imagine – schematically, even, diagrammatically – a building that doesn’t require emergency egress? A way of living not predicated on the fragile premise of always having a way out. It would likely be one story, collapsible like a house of cards, or an accumulation of earth, dirt, and rubble. Temporary? Does permanence (steel, glass, concrete, even brick) require the capacity for escape, a sort of exchange, a bargain that says – you can stay here, forever, because there is always the window, just open it and jump, or climb down the ladder. Without an emergency exit would we just live in fear? Maybe so, maybe such an urban and psychic restructuring would allow for a different way of life, more attentive to the dangers of climate instability than hiding from them.

[1] These thoughts develop out of an ongoing project on emergency exits, the first iteration of which was published on e-flux architecture as part of the Overgrowth series, in connection with the Oslo Architecture Triennial, September 26, 2019. https://www.e-flux.com/architecture/overgrowth/284030/emergency-exit/

[2] Ocean Vuong, “The Weight of our Living: On Hope, Fire Escapes, and Visible Desperation” 2014. https://therumpus.net/2014/08/the-weight-of-our-living-on-hope-fire-escapes-and-visible-desperation/

Daniel A. Barberis Chair of the PhD Program in Architecture at the University of Pennsylvania, and a Research Fellow at DINÂMIA’CET Universidade de Lisboa. His most recent book is Modern Architecture and Climate: Design before Air Conditioning.