There is nothing new under the sun

Since September 2019, students of the Curatorial/Politics seminar of the CCC RP at HEAD Genève have been engaging with the idea of artistic internationalism: How could an image speak of solidarity? How could an image itself create an “alliance across”? The outbreak of Covid-19 disrupted the seminar, both regarding the seminar’s program and the limits of art-making under the planetary crisis. The following text operates as a seminar’s satellite searching for an “alliance across” during the pandemic crisis, or, following Rosa Mercedes’ call, looking out for the visual politics of C19. (DM) 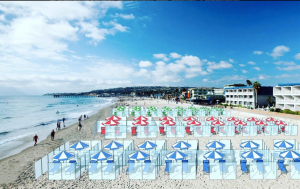 There is nothing new under the sun

Barriers made of plexiglass ensure protected social contact from potentially SARS-Cov-2 contaminated surfaces, fomites or contracted humans. Transparent, they are mostly used to protect people, both workers as well as attendants, in working places. As this current unprecedented crisis is reshaping landscape and behavior, plexiglass barriers or plastic shields have been erected everywhere––from self-made protections at the grocery store to industrial ones at giant supermarkets. As a student and a jobber, I am experiencing these barriers from both standing on front and behind them. Yet, before unfolding the ambivalent feeling between protection and estrangement, let me note: It is no surprise that the pandemic crisis caused by the pathogen agent also mobilizes its own needs for a kind of corona-design.

On 16 March 2020, the French President Emmanuel Macron declared that “we are at war” against the virus, thus weaponizing the virus. In that vein, a plexiglass barrier could be called an ultimate shield. Unsurprisingly, they have become a design issue. Some designers speculate and propose concrete ideas for an architecture of protection/control, with the plastic shield as its material building bloc. For example, an Italian product design office proposes to apply this principle to beaches, economic survival being at stake. Regardless that the project is probably not viable considering summer temperatures, the materiality as well as design of plexiglass shields may operate well as allegory of this health crisis.

Indeed, the digital collage of the beach-cubicles––although fictitious––, ponders upon the ways the virus can reshape digital, cultural, retail and consumer landscapes. Recalling Macron’s war metaphor that inadvertently “humanizes” the virus into a military figure, the plexiglass as material articulation of control seems in close correlation with the normalization of a state of exception. In this case, the latter defines a special condition in which the juridical order is suspended due to an exceptional danger – such as of the SARS-CoV-2-virus – where basic laws and norms can be avoided by the state while facing the crisis. In such a situation, many countries opted for the confinement of the major part of the population, enforcing social distancing as well as regulations on hygiene norms. Plexiglass then, is a good example of a strategy of protection that emerged mainly in sales and customer service jobs in order to respect safety policies while keeping up with economic activities. Here, the illustration demonstrates an organized grid, separated by plexiglass and marked by a sun-protecting umbrella, regulating the maximum volume that a bather/couple may occupy at the beach. Such spatial beach-control has been at stake, surely, in pre-corona times. Yet, what has been here proposed as design for health protection can be seen as a technology that, first, sharpens our understanding of transparency as a tool of control, second, sketches the economic dimension of leisure, and third, speaks of the enmeshment of health, leisure, economics and politics.

Indeed, under the pretext of the health crisis, these boxes or cubicles reveal a system that promotes individual protection and integrates an anxiety-provoking climate into the landscape. Even if transparent, these boxes compartmentalize space and saturate it. There is only a small step from the cubicles-occupying square to the privatization of that piece of beach. Symbolically, the question of the human being, which is at the heart of all concerns at the moment, is canceled. In fact, the bathers outside of the collage area are located randomly, enjoying the beach’s free space, alone or accompanied, still or in motion. But, within the cubicles section, the subdivision of land is inhibiting this feeling of freedom: there is not much space for human activities conceptualize here, but rather, for economical ones. As a consequence, the bather here is envisioned only through the function of consumer, highlighting the fact that a new necessity is created, and one might wonder after all if these cubicles are protecting people or rather economic activities.

One could read the illustration, thus, as following: Obediently penned, individuals are compartmentalized as if they are goods: organized, sorted and separated while the economic activity moves along. This idea recalls a neo-liberal logic, particularly in the medical sector, where the economy of health is calculated by efficiency per patient; and the consequences of which are today dramatic. Specifically during these times, when social media and news report about applause-concerts for doctors and nurses, it only must hammer out that the health sector has never ceased to shout out its needs in terms of infrastructure, staff development and payment; while aviation companies such as SwissAir or Lufthansa receive massive state support, one wonders about governmental bail-out actions for understaffed hospitals, exhausted doctors and overworked nurses. Despite the warnings, managerial policy-makers of the health industry reduced the number of hospital beds, rationalized treatment-time to a minimum while patients were released as quickly as possible to ensure maximum rotation of the beds; an empty bed is not a profitable bed, nor is one that is occupied too long.

Therefore, the question of transparency is twofold because it designates as much what can be seen through as well as what can be hidden. Indeed, the material transparency of the shield, or the box, ambivalently displays an ideological mobilization of statehood under the condition of global crisis; it seems to legitimize the state itself in the first place to control human movement. Yet, it also turns the material logic of transparency into a tool that visualizes the invisible structures producing an asymmetry of social justice, amplified by political protocols of statehood.

Surely the picture replies, even if it is fictitious, to a capitalist desire that is generally oriented towards profit and is weak in terms of social responsibility and concern for the general interest. The fictionality of the beach cubicles are nevertheless anchored to an actual starting point where plexiglass shields have invaded daily landscapes in only two months, thus raising the question of sustainability: will this crisis-answer become permanent? Certainly, the fact that it got into a question of design tends to confirm this proposal and makes daily encounters with these barriers disturbing.

Therefore, to look through a plexiglass shield at the grocery counter, for example, is to look through a filter despite its claim for highest transparency; yet, it is an element that distorts reality in an almost imperceptible way through its still feasible materiality. It’s a prism through which a strange feeling emanates, a strangeness that is difficult to put into words, because transparency is meant to pass a gaze, a thing, or data through as if there was neither a source nor a limit. Even if it constitutes a good shield against the virus, a step aside allows us to see its artificiality and its lack of span. The plexiglass materiality puts in dialogue multiple space-times that are never fully experienced together as it amplifies a structural arrangement of space. Yet, this very concrete experience of separation also connects the spaces because the question of point of view is rendered apparent, thus displaying the coexistence of both sides. Such process inexorably activates a concept of categorization that first, begs the question as to which side of the barrier is better to stand in and second, where one actually is.

During the corona-crisis, I have encountered both sides of the plexiglass shield: Since the lifting of the lockdown, I am working as a sale assistant, and as a student/citizen in Geneva, I need to go shopping daily goods. Occupying a double-perspective on the plastic barriers, I came up against unalike experiences depending on the side I was standing in. When I wanted to photograph the plastic constructions made for protection, I immediately felt uncomfortable. While acknowledging that they were installed to protect me as a citizen, I could not get away from the feeling that I would photograph a human behind as if she was in a cage, that feeling got stronger than any rational explanation on how to protect the changing crowd of people (citizen/consumer) from being contracted by SARS-CoV-2 otherwise. Even when no one was sitting or standing behind the plexiglass, I felt a strange sadness because this kind of architecture clearly marks positions and only exists in relation with bodies, thus dramatizing their absence.

When I work now these days, then I am the one behind the protecting plastic thing; and I mostly have the impression to bother. In a way, the materiality of transparency underlines the idea that the virus needs hosts to survive, who I can be one––without knowing it. To be honest, if I was offered or asked to be replaced by a machine––out of anxiety, I would have said ‘yes’. But that is exactly the danger of a state of exception; giving answers out of fear, out of control, out of despair…. What is not fair in contrast, are the neoliberal agencies ready to retrieve our feelings to take advantage of the situation and stain gain from it.

Back to my workplace, after many cleaning movements on the surface of the plexiglass, my gaze gets eventually lost into the void and I catch myself refusing to look through while staring at my reflection. Subsequently, the relationship between form and function becomes blurry, because seeing myself in the plastic’s reflection dysfunctionalizes the shield for a moment but confronts me with the confinement of my body, the control of the environment, the separation from people. I suddenly become part of that design of a controlled landscape, packed behind a plastic as if I was product. It feels as if I disappear within this corona-design to transpose the image of myself into the plexiglass. While losing a sense of reality, the reflective feature of the plastic shield, both optically and metaphorically, captures the notion of the self within its materiality, thus emphasizing on the question of transparency as a tool of control over bodies and agencies.

Such complication of the materiality of transparency, exercised through the plastic in front of us, suggests that this reflection is more than an image. Through the plexiglass pathway, I end up not seeing the absence of bodies in the boxes. Instead, I see ghost bodies that are trapped into an unattainable time-space of which the image’s virtuality reinforces the feeling. To some extent, it is a collective reflection that fades away massively. Yet, instead of contemplating the future of plastic ruins in shops, groceries, cafés, maybe at beaches, in supermarkets, and so on, the self-confrontational challenge of such transparency’s materiality might also open a stage where a critical fabulation beyond transparency as a tool of control can happen.

Vanessa Cimorelli lives and works in Geneva. She graduated from both HEAD-Geneva in visual communication (with a major in “image-récit”) and the University of Lausanne in English literature, linguistics and social sciences; currently she continues her studies at the CCC RP Master, focusing on questions of corporeality, gender and space.