This is the thirty-first instalment of a collaborative effort by the Journal of Visual Culture and the Harun Farocki Institut, initiated by the COVID-19 crisis. The call sent to JVC’s editorial board, and a wide selection of previous contributors and members of its extended communities, described the task as follows: “There is a lot of spontaneous, ad hoc opinion-making and premature commentary around, as to be expected. However, the ethics and politics of artistic and theoretical practice to be pursued in this situation should oblige us to stay cautious and to intervene with care in the discussion. As one of JVC’s editors, Brooke Belisle, explains: ‘We are not looking for sensationalism, but rather, moments of reflection that: make connections between what’s happening now and the larger intellectual contexts that our readership shares; offer small ways to be reflective and to draw on tools we have and things we know instead of just feeling numb and overwhelmed; help serve as intellectual community for one another while we are isolated; support the work of being thoughtful and trying to find/make meaning…which is always a collective endeavour, even if we are forced to be apart.'” TH

White tinted glasses: on the ‘difficult’ heritage of Italian colonialism 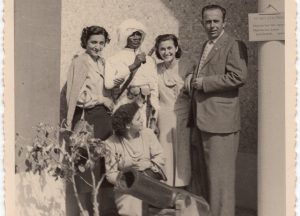 On May 25, 2020, the Museum of Civilizations in Rome announced the foundation of the Museo Italo-Africano “Ilaria Alpi” (Italo-African Museum), re-housing the collection of the former Colonial Museum. Established in Rome in 1923, it was used as a propaganda tool, even after the end of Fascism and the fall of the short-lived Empire (1936-41) occupying Ethiopia, Eritrea, Somalia, Libya and the Dodecanese Islands. After its closure in 1971, its collection has laid in storage for decades.

Due to Covid-19 emergency measures, the Italo-African Museum was announced in a (poorly advertised) virtual press conference that did not allow for audience interaction or a Q&A session. Beside a statement by the Italo-Somali writer Igiaba Scego, the absence of specialists in the fields of colonial history, postcolonial and decolonial studies, as well as experts from former colonies, was made all the more worrying by the proposed inclusion of – and punctual reference to—Ancient Roman history, a foundational element of colonial and Fascist propaganda. This concern increases when considering the museum’s placement within the EUR district, built to celebrate the twentieth anniversary of the dictatorship.

Until now, information on the re-exhibition of the collection have only been available at informal, confidential levels, which has made it difficult to craft an appropriate response to the project. Even the conference provides little data: it outlines a series of wishes and ideas without putting forward clear plans or disclosing how activities will be funded and managed, despite the museum being set to open next year. Nor were the formation of a committee or ethical board including members of the communities still affected by the colonial trauma inherent in the collection formally announced. In addition, no explanation on the name Italo-African Museum was provided, even though its Eurocentric posture, alluding to ‘neutral’, reciprocal relations, warrants one. At this moment, it remains difficult to ascertain the reasons behind such rushed press conference, or to evaluate its vague propositions, nevertheless, the whole operation appears intrinsically flawed, reflecting a collective colour-blind attitude that has become particularly visible in light of recent events.

Taking place on May 25, 2020, the conference coincided with the brutal assassination of George Floyd, which propelled protests, actions and debates demanding justice for black lives and the end of systemic racism. In Italy, support to the Black Lives Matter movement was firstly directed to the US context, ignoring the struggles of Afroitalians, migrants and enslaved agricultural workers (mostly from Sub-Saharan Africa), until more recently, when the #saytheirnames campaign has begun shifting attention to the previously disregarded victims of racially motivated violence in the country. Simultaneously, in the wake of similar actions happening in the US and Europe, demands for the removal of a statue commemorating the journalist Indro Montanelli (who, throughout his life, publicly defended having taken a 12-year-old Eritrean concubine during the Italo-Ethiopian War of 1935-36), are growing. Yet, so far, discussions on so-called ‘difficult heritage’ have mostly regarded Fascist monuments dissociating them from the regime’s ruthless racist politics.

Italian society has indeed long refused to acknowledge the implications of, and responsibilities towards, the colonial past and its legacies. In order to maintain the ‘colour of the nation’ unchallenged, blackness has been systematically erased from collective history, marginalised and demonised—portrayed as destitute and foreign. Such context has given rise to white solidarity practices decoupled from scrutiny of white privilege and accountability, which, similarly to discourses and operations related to colonial and Fascist heritage, have failed to recognize their rootedness in structural racist violence – ultimately reproducing the oppressive dynamics they pretend to oppose, disempowering the communities they proclaim to care for.

Alessandra Ferrini is an artist, filmmaker and educator. Her research focuses on Italian foreign and racial politics, questioning the legacies of colonialism and Fascism with a specific interest in the past and present relations between Italy and the African continent. She is an AHRC-funded PhD candidate at LCC, University of the Arts London, with a practice-based project titled “Gaddafi in Rome: Dissecting a Neocolonial Spectacle”.