This is the twenty-fourth instalment of a collaborative effort by the Journal of Visual Culture and the Harun Farocki Institut, initiated by the COVID-19 crisis. The call sent to JVC’s editorial board, and a wide selection of previous contributors and members of its extended communities, described the task as follows: “There is a lot of spontaneous, ad hoc opinion-making and premature commentary around, as to be expected. However, the ethics and politics of artistic and theoretical practice to be pursued in this situation should oblige us to stay cautious and to intervene with care in the discussion. As one of JVC’s editors, Brooke Belisle, explains: ‘We are not looking for sensationalism, but rather, moments of reflection that: make connections between what’s happening now and the larger intellectual contexts that our readership shares; offer small ways to be reflective and to draw on tools we have and things we know instead of just feeling numb and overwhelmed; help serve as intellectual community for one another while we are isolated; support the work of being thoughtful and trying to find/make meaning…which is always a collective endeavour, even if we are forced to be apart.'” TH 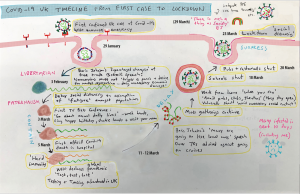 The virus enters the host cells of bodies of individuals in a population through physical proximity. ‘Physical distancing’ needs to be operative at a social level for prevention and containment to be successful – that is the duty of the state. However, the official term ‘social distancing’ might suggest a distance from ‘the social’, rather than society-wide physical distancing. Social distance was not at all the experience of many who, in various ways, felt social closeness during lockdown. In the UK, the term ‘social distance’ could be aligned with Margaret Thatcher’s dictum ‘there is no such thing as society’. On 29 March, six days after lockdown, Boris Johnson, physically isolating with Covid-19, declared that ‘there is [after all!] such a thing as society’ ­– a fact epitomised, of course, by the NHS, essential care work, and social cooperation. Johnson’s epiphany might be viewed as a purely cynical, not to say hypocritical political exercise, or else as a rhetorical concession as to the bankruptcy ­– now plain for all to see – of the anti-social(ist), privatising individualism which Johnson’s party has upheld as holy writ.

Given all this there are interesting positions to be mapped with respect to relations of the social and the physical in connection with both distance and proximity. In respect to a state’s responsibilities during a viral pandemic, social distancing at an ideological level may force physical proximity amongst sections of the population by those who remain at a safe physical distance. Alternatively, social proximity at an ideological level may, thanks to those who must necessarily remain physically proximate in medical and care situations, protect people by enabling physical distance. 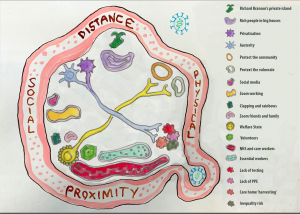 Dean Kenning is an artist and writer living in London.