The disgusting image and the virus

Since September 2019, students of the Curatorial/Politics seminar of the CCC RP at HEAD Genève have been engaging with the idea of artistic internationalism: How could an image speak of solidarity? How could an image itself create an “alliance across”? The outbreak of Covid-19 disrupted the seminar, both, regarding the seminar’s program and regarding the limits of art-making under the planetary crisis. The following text operates as a seminar’s satellite searching for an “alliance across” during the pandemic crisis, or, following Rosa Mercedes’ call, looking out for the visual politics of C-19. (DM)

The disgusting image and the virus

Recent discussions in the context of coronavirus have led to the remembrance of artworks and strategies developed by artists and activists during the AIDS crisis, such as Nan Goldin, Gregg Bordowitz, Theodore Kerr or the collective Gran Fury. Drawing on the cultural crisis following the global dimension of the molecular impact, comparisons between covid-19 and HIV result from the trauma inflicted by such pandemics, in order to situate better, and perhaps to make sense of such global virality. Though, both global health crises differ significantly. While the outbreak of the HIV-crisis largely hit marginalized communities that were additionally affected by the inaction of governments, the covid-19-crisis has seen an enormous mobilization of state resources. However, both draw on a crisis of representation regarding the visualization of the pandemics’ dimension. All the while, visual materials in newspapers, social media, and official reports illustrate the impact of the coronavirus, with the curve reigning supreme. Yet, where are the bodies?

Macro-political strategies in which existing entities are attacked, appropriated and depleted of their resources by new occupants resonate to the micro, molecular level in which similar occurrences are observed. Working as parasite- agents, the virus disseminates itself aggressively through docking and hacking the living cells, and then, through transiting from one body to another in a plurality of liquid ways, whether through sex, exchange of fluids or droplets. The virus is able to replicate its genetic material exponentially through the cells it hacks, possibly affecting different organs and eventually leading to death. Bodies react differently to such diseases. While one body can survive with a light treatment, the other requires they extensive medical care. In the case of covid-19, artificial breathing might be a critical tool for patients. In that case, mechanic respiratory devices called ‘ventilators’ are connected to lungs of sedated individuals after intubating the respiratory system with the ventilation apparatus penetrating the trachea. The intubation is a painful operation that involves suffering, vulnerable bodies. Representations of such interventions disrupt glossy images of health and the ability to meet ideals. In the case of covid-19, visibility of virus-contracted, vulnerable bodies is scarce, confined to hospital wards and closed-off locations.

Depictions of the coronavirus outbreak engage the structural characteristics of this pandemic. While we witness the increase of health disparities in regard to race, class and age in particular (less gender, though, statistics demonstrate a slightly higher infection rate of men than women), it may potentially leave unharmed a large scale of the population, in contrast to already marginalized communities. Organized action in response to the current pandemic––with a significant mobilization of state apparatus––reflects such contagion. The case of France, for instance, reveals how quickly curfews can be installed that rule through executive state-organs intensifying the scope of police action. In such authoritarian contexts of state emergency, coercive policies are materialized[i] while representations of the current viral state of society are tidy. Visually speaking, since the outbreak, a massive diffusion of the “flatten the curve graphic” has occurred as a tool to reason the organized state-actions. Illustrating the limits of national sanitary capacities, “Flatten the curve” has become a public health strategy to promise a possibly smooth infection curve where hospitals might exceed their maximum capacity. The effectiveness of such a graph lies in its possible adoption justifying authoritarian measures on the claim in the name of public health that science is neutral or objective. Such a objective mental model of science depoliticizes health up to the erasure of health disparities as well as inequalities in medical infrastructure. The effectiveness of such a mental model draws on a strong mediatic presence, but also on a massive diffusion on various platforms of social media, leaving out scarce space for alternative accounts on the pandemic disease. 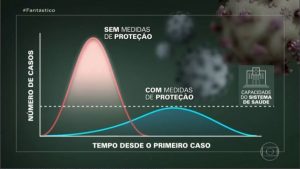 The retention of “Flatten the curve” turns the strategic graph into a viral image. It contrasts the condition with which another epidemic black queer and queer communities have learned over the decades to live with: AIDS has been present since its outbreak in the early 1980s, with no possibility of curative treatment. The governmental/mediatic reaction to the HIV-crisis widely differs from the coronavirus pandemic. Instead, the outburst of AIDS is structurally closer to the opioid crisis, the epidemic of missing and murdered indigenous women or the murder rate of black trans women and trans women of color, as writer, Organizer and artists Theodore Kerr rightly argues.[ii] Though, as covid-19, the HIV-virus affects bodies at the molecular scale. Yet, both types of viruses increase health disparities between communities. Fear and stigma are attached to the viruses and both are inserted in political-hegemonic narratives. National responses to the AIDS plague have long been marked by public neglect, state-inaction and sexual as well as racialized stigmatization towards affected communities that were originally scrutinized as the four H: Haitians, homosexuals, heroin users, hemophiliacs, later also hookers. The conspiracies about its origin in Haiti, later in the Democratic Republic of Congo, fuelled the act of weaponizing “patient zero” for nationalistic, homophobic and fascist politics; similarly to the debates around covid-19 in regard to declarations by government leaders and media coverage sparking anti-Chinese rhetoric. Furthermore, the ill-naming of the so-called “Spanish” flu (1918) or the “Hong Kong” flu (1968), reveals a plague management discourse that relies on the claim of an origin in a community or country that would impose the responsibility for the outbreak, economically and politically. With claims of neutrality, narratives in which blame is casted on the migrant, the alien, the stranger or the non-normative subject exploit the legitimacy of disembodied scientific objectivity. This entails the stigmatization of individuals as if it was their responsibility for the spread of molecular entities. From the dispossession of these voices and subjectivities, groups and networks are formed to counter such violent discourse.

Over the last decades, AIDS activists have developed tools to fight ignorance, state inaction and criminalization. ACT-UP actions and other grassroots political groups transformed the virus into an important arena for struggle, public debate and protest.[iii] The moralizing hegemonic discourse considered the virus as a natural response to social deviance. Yet, contracted persons experienced the virus’ different temporalities in specific ways. On the one hand, they witnessed the sweeping number of people, friends and community members dying of HIV with harrowing rapidity. On the other hand, the global immobility and the lack of a cure elaboration led artists, researchers and activists to develop image-strategies that were fuelled by such urgency to use the urban space (Group Material using ad spaces on public transports), to organize direct action (the actions by ACT-UP against pharmaceutical companies), and to mobilize images with violent-ugly potency. These images deliberately exhibited the effects of the virus; they aimed consciously to point out the virus’ damages of bodies as well as communities. The images insist that health, privacy, sex and intimacy are political topics; actors of communities use them to politicize those that were otherwise invisibilized. For example, Nan Goldin’s work responded to the life-death urgency within the hitherto glamorous cultural scene, so to spark public awareness, political action, social care, medical treatment of which the affected communities ought to benefit on the short, medium, long term. Queer approaches to representation strategies have emphasized the capacity of self-representations by the concerned actors, drifting away from mainstream narratives and identity politics.[iv] Artist-activist collectives such as Gran Fury, who worked closely with ACT-UP, activated the image as a viral agent that could be understood as an “image-complex” considering the assemblage of extra-governmental makers, alternative distribution systems and health-political debates; it turns the image into an infrastructure that may entail the powerful potency of renegotiating the place of marginalize or queer communities within society during the crisis.[v] 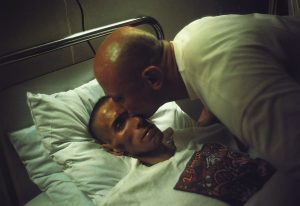 In the case of covid-19, the pandemic draws a stark visual contrast to the AIDS crisis in the absence of such violent-ugly, or, disgusting images. The overrepresentation of ‘the curve’ as well as stock-images of C-19 at the molecular level are symptomatic of governmental responses to the plague. While more or less effective and authoritarian, nation-states are taking coercive actions so to reduce the health, economic, social consequences of the contagion. A situation alien to AIDS. Drawing a comparison between those two pandemics is recurrent nowadays as a tentative to understand the contemporary situation in relation to the entanglement of politics with science, health and economics; and, perhaps, as a way to heal trauma induced by the virus (Theodore Kerr). Comparing the corona-phenomena to previous epidemic occurrences allows us to gain a grain of understanding and to make sense of the void, of absent bodies. Visually speaking, pathogenic entities not only put pressure on human existence but also entail a crisis of representation:[vi] Who gets represented? By whom? Who does not? Under what conditions? These questions indicate the continuity of a powerplay. Stripping actors off their agency as well as their control on the forms of their visual appearance in public constitute a form of visual biopolitics, harshened during such viral crisis. Solidarity and alliances by network groups aim to respond to and oppose the violence of representation. Though, the crisis of AIDS and covid-19 profoundly differ in terms of government response towards affected communities. While communities are restructured and recomposed, individuals hold a similar relation to life in times of HIV and coronavirus: C-19 certainly is a shock for everyone across the globe. Yet, while privileged chunks of society might find themselves secured in normative orders, it is up to queer people of color to draw from previous struggles to create their own image. Indeed, for decades, living with a virus has constituted a silent norm and normative silencing.

Wet and sticky, Antoine Simeão Schalk is a fluid creature interested in questions regarding queer and non-white bodies. Active in the fields of post-colonialism, gender and queer studies, politics of representation, she used to read Bourdieu as she reads Dustan today. He studied political sociology at the University of Lausanne and at the Pontifical Catholic University of Rio de Janeiro. They are currently a master student at the CCC RP amidst HEAD-Genève and co-curator of artist-run-space one gee in fog.

[i] Léopold Lambert, “Introduction: a short colonial history of the French state of emergency”, originally published in The Funambulist: Vol. 29: States of Emergency, (Paris: The Funambulist EURL, 2020)

[vi] Renaud Chantraine, Florent Molle, and Sandrine Musso, “AIDS Politics of Representation and Narratives: A Current Project at the Museum of Europeanand Mediterranean Civilizations (Mucem) in Marseille, France”, originally published in What you don’t know about AIDS could fill a museum, Theodore Kerr, (Zurich: oncurating, 2019).