This is the fifteenth instalment of a collaborative effort by the Journal of Visual Culture and the Harun Farocki Institut, initiated by the COVID-19 crisis. The call sent to JVC’s editorial board, and a wide selection of previous contributors and members of its extended communities, described the task as follows: “There is a lot of spontaneous, ad hoc opinion-making and premature commentary around, as to be expected. However, the ethics and politics of artistic and theoretical practice to be pursued in this situation should oblige us to stay cautious and to intervene with care in the discussion. As one of JVC’s editors, Brooke Belisle, explains: ‘We are not looking for sensationalism, but rather, moments of reflection that: make connections between what’s happening now and the larger intellectual contexts that our readership shares; offer small ways to be reflective and to draw on tools we have and things we know instead of just feeling numb and overwhelmed; help serve as intellectual community for one another while we are isolated; support the work of being thoughtful and trying to find/make meaning…which is always a collective endeavour, even if we are forced to be apart.'” TH 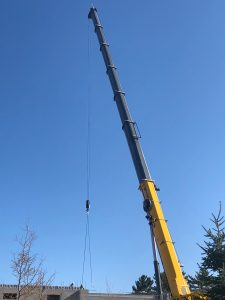 I find myself taking walks to add variety to my day. After more than two years of living in my neighborhood, which is close enough to my job that I walk there multiple times a week, I am for the first time attuned to such things as the contents of my neighbors’ gardens or the stages of their house projects, the way the weather will change the behavior of our local birds, and the slow progress of spring as it appears on the deciduous trees. Chives come first, then rhubarb. Crows enjoy a grey day; seagulls prefer moisture. Grackles have black iridescent bodies, cluck a bit like chickens, and will eat small birds and minnows if given the chance. When it’s sunny, I can discern the scent of a magnolia tree from a safe social distance of six feet.

Of late, I have also found myself a regular visitor to a construction site. It’s a daily dose of theater to watch cranes as tall as dinosaurs lower steel beams onto platforms, front loaders unleash rubble into dump trucks, or cement mixers steadily turn.

I have come to think of the construction site as the major cultural touchstone of my day. Its subjects are riveting, the changes constant, and the mechanisms profound. Really: that brachiosaurus-sized crane puts time into perspective, making more tangible the way the world may have looked when it teemed with life at that scale.

My neighborhood is likewise more exciting when I allow observation to be not only a way to pass the time but a method to make sense of its passing. The yards are beginning to be raked and mulched, making way for daffodils and hostas. The fishing boats are filling driveways. The scent of charcoal has begun to waft from back decks and patios. The calls of ships as their captains hail the lift bridge have returned to our daily soundscape.

Within the smallest scale of my world, as the eyes of my twin newborns begin to widen, my toddler––at home with us full time––is gradually transforming into a little kid.

Even with all this change I’m freshly attuned to, I still find this time exceedingly repetitive. The certainty of how each day will pass contradicts the uncertainty of the future but gives little comfort when I am at my most morose. This is not a confession of depression. To the contrary, it is a confession of the embarrassment I feel at not being able to rise to the pandemic occasion with more grace and self-awareness.

I live in a mid-sized city in the northern reaches of the American Midwest. I have an objectively easy life. I am not threatened by the pandemic; I am inconvenienced by it. My boredom is a sign of privilege. This has become a daily mantra, a reminder that pulls me away from a listless moment and back to the lilac buds growing from a plant that only two months ago quaked under the remains of three feet of snow and ice.