This is the fourteenth instalment of a collaborative effort by the Journal of Visual Culture and the Harun Farocki Institut, initiated by the COVID-19 crisis. The call sent to JVC’s editorial board, and a wide selection of previous contributors and members of its extended communities, described the task as follows: “There is a lot of spontaneous, ad hoc opinion-making and premature commentary around, as to be expected. However, the ethics and politics of artistic and theoretical practice to be pursued in this situation should oblige us to stay cautious and to intervene with care in the discussion. As one of JVC’s editors, Brooke Belisle, explains: ‘We are not looking for sensationalism, but rather, moments of reflection that: make connections between what’s happening now and the larger intellectual contexts that our readership shares; offer small ways to be reflective and to draw on tools we have and things we know instead of just feeling numb and overwhelmed; help serve as intellectual community for one another while we are isolated; support the work of being thoughtful and trying to find/make meaning…which is always a collective endeavour, even if we are forced to be apart.'” TH

On 23 April, when both Turkey and the UK had just completed their first month of coronavirus-related measures, a special flight took off in each of these countries. A Turkish Airlines flight numbered TK1920 flew over central Turkey, leaving radar-trackable traces that amounted to “the world’s largest Turkish flag” on occasion of National Sovereignty and Children’s Day. Turkey’s current parliament was founded on this day in 1920 (hence the special flight number). The founders, the story goes, wanted to gift parliamentary democracy primarily to children. As a result, many a child’s playtime every 23 April is infused today with nationalist iconography. In the UK, the Northern Ireland Air Ambulance, outsourced to the private company Woodgate Aviation, conducted a flight on 23 April 2020, which traced out the initials N(ational) H(ealth) S(ervice) capping a heart-shaped trajectory. The idea, said the company, was to offer “a unique way of saying ‘thank you’ for the heroic work being done by frontline NHS staff to combat the Covid-19 pandemic.” There was, of course, nothing particularly unique about Woodgate’s enterprise, except perhaps its sheer geographical scale. The motifs it featured have, over the past weeks, become a ubiquitous sight in much of the UK where they have been drawn on home windows and pavements especially as children’s play. 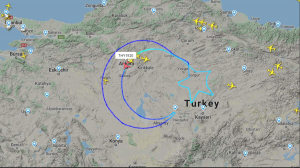 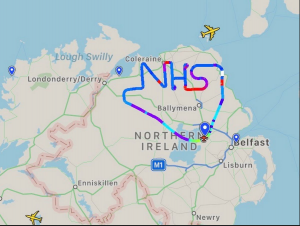 Play and aerial imaging correspond to prominent themes in Harun Farocki’s oeuvre, the latter more directly than the former. His manifold investigations into the visuality of violence and the violence of visuality exposed aerial photography and satellite imagery for serving, right from the outset of their military origins, highly selective and often-violent political agendas rather than the objective technicality associated with them. These technologies, showed Farocki, have led military violence to harden into dominant visual regimes that, at every purported turn from war to peace, prove far longer lasting than warfare proper—so much so that, gradually since the end of World War Two, many of these regimes have increasingly become oriented not towards depicting the world but rather towards its destruction. Farocki also charted a convergence between visual technologies of warfare and those of play, particularly in the realm of computer games. Dovetailing with larger processes through which machines of militarized imaging have conditioned the ordinary eye, this convergence has rendered relatable and even playful the act of seeing another as an object to be targeted, monitored and/or surveilled.

The two flight-radar-trackable images drawn this past 23 April in both Turkey and the UK indicate a particularly sinister phase in the visually charged entanglement between play and war that Farocki dissected so masterfully. No longer is a militarized visual technology rooted in violent nationalism simply being made playful or the visuality of play merely being restructured around that of warfare. At stake here, rather, is the pragmatic and programmatic simplicity that characterizes play in its purest form—play that lacks geovisual targets, monitors and surveillance proper, or play, in other words, as nothing else but play even when it may involve the drawing of a national symbol. It is by appropriating play as such that these two images prop up a certain disaster nationalism—a “we’re all in the same boat” ideology—and, in so doing, obfuscate ongoing socioeconomic disparities that mark the way coronavirus is experienced in neoliberal settings such as Turkey and the UK, and the political responsibilities involved therein.

Just in time for the appearance of these images of disaster nationalism as geovisual play, children on my street had made the below drawing on our pavement. 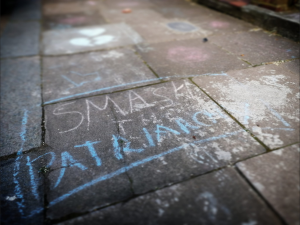 Appropriating the simplicity of play, it seems, might come with consequences.

Eray Çaylı is an ethnographer and currently Leverhulme Trust Early Career Fellow at the European Institute, London School of Economics and Political Science (LSE); he completes work on the book The Architecture and Violence of Confronting the Past in Early 2010s’  Turkey while also conducting new research on how Turkey’s resilience policies intersect with its histories of political violence.