Triage is one of those oddly familiar/unfamiliar terms that during the CoVid 19 pandemic have somewhat unexpectedly been shifted to the near centre of attention for a global public that until very recently was spared any real, immediate and close-up experience of natural disasters or epidemics. Triage, in itself is an option, a technology, to conceptualize the specific dilemmas and dissonances of this never-ending crisis. Dilemmas and dissonances such as: the necessity to take decisions with incalculable consequences, in a situation where every decision is (seemingly) forbidden for ethical and legal reasons; it rests on the belief that a state of emergency may be (seemingly) overcome by implementing an algorithm to ponder the chances and conditions of life and death. 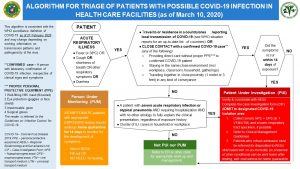 In other terms, triage, is the assertion of “rational choice” in a realm of radical undecidability. At least potentially, triage acts as a cipher for a de-individualization of responsibility, a utilitarian disempowerment of the individual by means of a transfer of sovereignty to an anonymous authority whose decision-making competence is the result of evaluations of medical practice, ethical reflection and, perhaps more ominously, political deliberation.

Wherever medical personnel have to decide on the distribution of patients, regarding care units and emergency medical care equipment, triage is put into action. In this instance it is not just difficult (and ultimately unresolvable) ethical questions which arise. In addition, a routinely executed (but in terms of historical and national context varying) protocol is in place, purportedly to accelerate the process of classification and distribution, and for the purpose of relieving on-site doctors, nurses and other decision-makers of any individually attributable responsibility. This latter inevitably only partially and certainly more in theory than practice (as made palpably evident in the numerous reports of shattered, exhausted and clueless dispatches and confessions by doctors and nurses from corona ICUs across the globe). 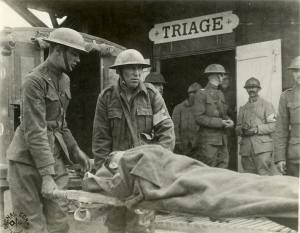 The word triage has its origins in military medicine of the early modern period. A derivation of the French trier (“to sort”, “to select”, “to pick out”). At (German) Wikipedia, and in more detail at Michael Toursarkissian et al. in the article “Triage: A military physician’s perspective,” tells how, in the early 16th century, German Emperor Maximilian I introduced his “Army-Sanitary Constitution”, for the creation of specific medical units to rescue and to care for the wounded deemed survivable. Two and a half centuries later, Frederick William II of Prussia issued a “Royal Prussian Field Hospital Regulation” (1787) detailing information on the classification of varying degrees of wound severity. John Morgan (1735-89), the first surgeon general of the American Revolutionary Army, is considered to be the first to have carried out triage on the battlefield itself: “According to legend, he rode off the battlefields after the battle to identify wounded men still to be rescued” (Toursarkissian et al). 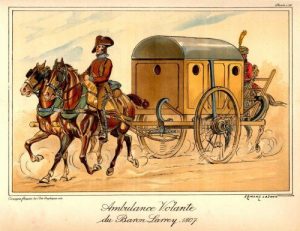 A few decades later, the Russian surgeon and anatomist Nikolai Ivanovich Pirogov (1810-81), a pioneer of field surgery, developed a stratified treatment procedure to impose order in the crowded sick bays of the Crimean War. Pirogov spoke for the first time of the “principle of dispersion of the sick” and divided the wounded into five stages, placing organization and logistics (at least) on a par with medicine and surgery. During World War One, the French medical service experimented with the principle of “triage—transport—traitement”. This is how the term triage came to be established in its current use. 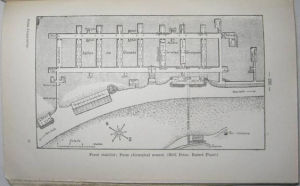 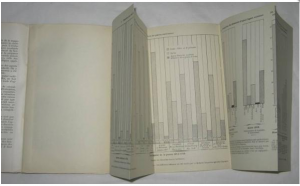 The first elaborate definition of triage by the French military doctors Lombardy and Spire (Précis d’organisation et de fonctionnement du service de santé en temps de guerre. Principes de tactique sanitaire, 1934) included the following four points: 1) diagnosis of the injury in question, 2) assessment of the urgency of the intervention (categorisation), 3) assessment of the degree of transportability, 4) indication of the destination of the wounded person. This forms a protocol of triage which to a large extent remains valid up to now.

Using a term from evolutionary biology, forever contaminated by the Nazis, triage may also be translated as “selection”. Most likely due to its semantic burden, the more neutral “sighting category” (Sichtungskategorie) became the common German equivalent of triage. By dint of this term another, phenomenological level appears to be addressed, which has the ring of media theory about it. For sighting/inspection as a modality of a first encounter with the condition of a patient is in structural proximity to the initial assessment of photographic and filmic recordings e.g. at the analogue editing table or the digital editing suite. An appraising gaze, at best equipped with abundant experience and intuition, is directed at the visual material to decide on its further use – not dissimilar to the doctor handling a number of patients showing a variety of different symptoms, previous illnesses, aging, social origins, etc., who is the compelled to sift through these findings in the shortest possible time to obtain abstract-concrete data, from which an allocation can be derived by implementing a triage algorithm (increasingly supported by computer software and hardware, which in turn depends on the predicted future of the individual patient).

In the predicament produced by the triage regime, medicine (and military and emergency medicine in particular) manifests itself as a technology of communication and semiotics. Much of this impression is linked to attempts to represent the stratifying and discriminatory decision-making process via tables and charts. Thus, to accelerate and disambiguate the triage process, a guidance system of—usually four (sometimes, as with the Iranian example shown below, five)—categories is deployed, each of which is assigned a colour. In descending drama (or, rather, severity) of cases: black, red, yellow and green (or, see below: red, orange, yellow, green and blue). 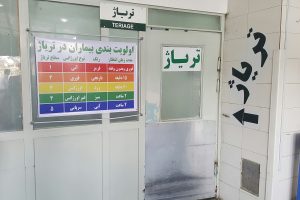 The fact that structured triage protocols can be traced back to the care of the injured in the event of war sheds significant light on the militarized conditions under which civil catastrophes such as a pandemic rapidly develop and in which they become the occasion and object of political action and rhetoric. The situation, requiring the actors to submit to a triage protocol, suspends all research into causes and each and every criticism. Neither the before nor the after can be of any meaning and relevance. Everything remains compressed in the non-deliberate now.

The chronopolitics of the pandemic have been mentioned repeatedly in previous posts, the problematic retraction of continuous temporality into the now-time of alternatives that can hardly be recognized and distinguished as such. As Gabriel Vinant points out in a poignant article on “Coronavirus and Chronopolitics” in n+1, there is also a “generational imbalance of power” which makes reforms of the health care system difficult by dint of so many material interests being linked to the current state of things. Regarding the US, asymmetrical chronopolitics are a redoubtable expression of class struggle. But this does not make the generation conflict irrelevant: “There is a genuine divergence in life chances and social power along the lines of age.”

In the corona triage the temporality of field surgery and the asymmetrical chronopolitics of age cohort and class affiliation meet in a new constellation (and, as the high infection and death rates among African-Americans show, must also be set off against race). [addendum from April 15, 2020: As Saidya Hartman writes in her entry to the April 14 Los Angeles Review of Books’ Quarantine Files: “Triage is the response to the crisis, a crisis exacerbated in the United States by the ‘no state’ state and capitalism, by racism and white nationalism, by lies and more lies, by mismanagement, by opting for death, by the lack of universal health care. In the vertical hierarchy of life, I occupy the bottom rung. Medicine has a pernicious history of racism and ableism. Even when hospitals are not overtaxed and equipment is not in short supply, I am not a priority. As empirical studies document again and again, the health-care system is routinely indifferent to black suffering, doubting the shared sentience of bodies in pain, uncertain if the human is an expansive category or an exclusive one, if indeed a human is perceived at all. Who lives and who dies? I fear the answer to such a question. I think I know what it is.”]

As a technique and algorithm of sifting and selection, triage is the rational answer to maximum exacerbation, to acute shortage, to the inevitability of choice. As there is allegedly no, or not enough, time to deliberate, consult, reflect and provide appropriate care and equipment (hospital beds, respirators, protective equipment, etc.), doctors and nurses follow the traffic light code that is now binding for them. The fact that they are constantly acting like field surgeons and paramedics, i.e. accepting and granting a state of emergency, makes the question why this or that war, this or that battle, this or that collapse of buildings, this or that epidemic had to happen at all seem undue and premature. Likewise, questioning why the obligations of the powerful and rich to provide welfare and health to their subordinates, but also of society as such to care for its members, stakeholders, confidants, employees, citizens, etc., were once again so flagrantly disregarded, is to be suspended.

The institution of triage owes its existence to the need to react ad hoc and without adequate preparation to the consequences of systemic discrimination, neglect, ruthlessness, greed for profit, etc. When the military and its medical infrastructure are summoned, metaphorically or literally, it can be safely assumed that the “sighting” must be held as soon as possible, and not in the temporality of “contemplation.” In pandemic times, sighting and contemplation, utilitarian and (in the broadest sense) aesthetic perception are becoming removed from one other—not only in relation to the point in time when the one is (still) impossible and the other is (again) feasible. Rather, the modalities of sighting and of contemplation are available (or not) depending on the respective access to economic and social capital. Triage would then just be another word for the social practice hovering on the horizon of inequality.

The fact that medical triage has long been supplemented and expanded by so-called social triage (sometimes also: street triage—”increasingly common and part of standard responses to mental health crises in the community”) suggests that the operational field of triage has long since expanded beyond that for which it was originally introduced. The pressure on the field surgeon to make decisions, the chronopolitical conditions of a “mass attack” of the wounded and infected—have acquired the status of a questionable normality, disaster after disaster, all over the world. This way, the algorithm of sighting and triage becomes the object of our counter-perception: as the key technology of a new imperialism now, as ever spiked with so many familiar ingredients. TH