Infection of a liberal weekly 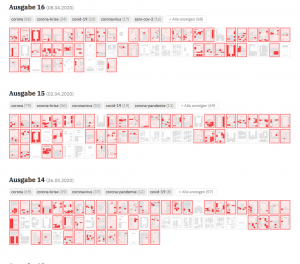 Supplementing the earlier post about the “Coronamovie” composed by the covers of the French daily Libération, I would like to point out a related project by Christian Lässer. On his website, the Berlin-based interaction and infographic designer has analysed the issues of the German weekly Die Zeit of the recent weeks and months. Lässer is thus able to render evident (and visible) how the topic of the epidemic gradually took possession of the newspaper – arriving at the present full-blown monopolization of its editorial content. The problematic nature of such monothematisation, however multi-faceted it may be, cannot be overemphasised. It is precisely the narrowing logic of news breaking news journalism that may be clearly identified as one of the key characteristics of an attention economy and deemed partly (if not largely) responsible for the particular magnitude that the coronavirus crisis has been able to attain. TH 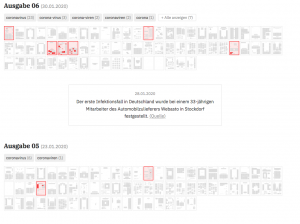