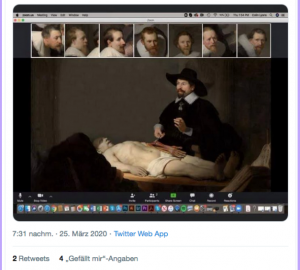 Image technology is built into communication tools on many levels – technical, ideological, diagnostical, etc. Providing visibility and audiovisual exchange amid the “war” against the “invisible enemy” however, organized by a global megastructure conglomerate of old school public television and radio ont the one hand and platform capitalism’s gated, paywall protected uber-architectures of “social” media and “content” delivery services on the other. Everything’s new, but it’s also dead and rotten. As Keller Easterling plainly states, “The smart city maintains the shine of the new, even while it centralizes information in ways that violate privacy, with a network that is primitive and crude.”

The longer the lockdown, the more people become aware of the limits of audiovisual connectivity. For they experience these screen-based provisions increasingly as the opposite of what they claim to be, i.e. as separation. I have been talking to many friends over the past few days who have developed phobic reactions to their own dependence on tele-presence. They regret and criticize the relentless condensation, compression, constriction of reality into (and by) the (handheld, desktop) screen. At any rate, the advantages of Skype and Zoom, of videochats and streamed media content have begun to recede. At least they are being seriously re-evaluated.

A friend was sent the Zoom joke above she had found on Twitter – a re-edited and updated version of Rembrandt’s Anatomy Lesson of Dr. Nicolaes Tulp. 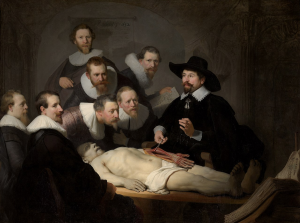 The doctor is now isolated from his students and colleagues, who observe the surgery from a safe (and, arguably, social) distance. Only the corpse, spread out on the table in front of him, shares Tulp’s quarantine. Translating the anatomy lesson into the condition of the tele-lecture appears to work quite smoothly, the entire group of bearded, white, collared men seems in full consent. The altered scene, reminiscent of already established multi-modal robotic tele-presence systems in the health sector and care environments (assistive robotics) thus anticipates its general implementation in a future of universal quarantine and compulsory remote learning. For that very reason Dr. Tulp himself appears oddly redundant. 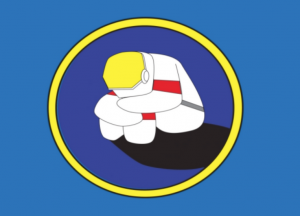 Icon of “Isolation,” from the website of NASA’s Human Research Program section on the “5 Hazards of Human Spaceflight”

Consequentially, rather than the incommunicado detainee, it is the distressed, numbed, info-overdosed solitary astronaut in her/his deserted spaceship, one of the subjects of NASA’s Human Research Program, who is now the running candidate for the role model of post-Corona distancing cultures.

In terms of the theory of the image, however, this is not exactly news. As André Gunthert, a leading French visual culture critic, reminds us in a blog entry on the “triumph of the images,” uploaded today: “We rediscover it every day in our digital exchanges: the image is not presence. Countless pragmatic pixel and numbers separate the experience of face-to-face encounters, which are not or poorly reproduced by the wired tools, from those of audiovisual mediation. I cannot touch or hug my virtual interlocutor. And the mosaic of screens in a videoconference only offers a disembodied and distant emulation of the physical meeting, with its varied levels of communication. But the image is no less irreplaceable when circumstances prevent direct contact. It is precisely this capacity for substitution that one of the first theoreticians of painting, Leon Battista Alberti, points out when he illustrates the powers of the image by evoking the most absolute of separations. ‘Plutarch says that Cassander, one of the captains of Alexander, trembled through all his body because he saw a portrait of his King’ [Plutarch, The Life of Alexander, LXXIV,4] (On Painting, 1435). When Alexander was alive, his portrait was only a copy, necessarily inferior to the model. But in the absence of the living body, the image becomes a remnant of presence. It is the conditions external to the representation that define its value. […] Images are not transparent vectors of information, and their limits or manipulations must be constantly recalled. But spectacles are only superfluous or redundant if we cannot freely access what they contain. When circumstances take us away from them, we do not hesitate to resort to substitute forms.”

Gunthert adds for consideration that there is “a good chance that the large-scale experimentation with telepresence, which has long met with much resistance, will encourage its lasting adoption. The repetition of epidemic episodes, the resulting hygiene pressure, not to mention the rise in ecological awareness, are combining to reduce traffic and reduce opportunities for gatherings. Telepresence applications are therefore destined to become established in a society whose codes will be profoundly transformed.” Such transformation of societal codes certainly is taking place right now. Only the extent to which it will gain (and maintain) a foothold that remains to be seen. Recent research on Communication in the Era of Attention Scarcity may well come in handy here. TH