When Donald Trump, early in the morning of March 23, twittered in capital letters (to be repeated orally – or whatever one should call these abject deliverances – by him in the subsequent White House Coronavirus Taskforce briefings) that “we cannot let the cure be worse than the problem itself,” he made another step in the epic-pathetic battle with the scientific community and in particular with the US government’s two main medical advisors, Deborah Birx and Anthony Fauci. Both Birx (a former director of the Centers for Disease Control and Prevention’s [CDC] Division of Global HIV/AIDS [DGHA] and US Global AIDS Coordinator under Barack Obama, who has been brought onto the coronavirus taskforce early in March) and Fauci (a renowned immunologist who serves as director of the National Institute of Allergy and Infectious Diseases [NIAID] and who, among other achievements, has contributed to early HIV research, outlining “the mechanisms of induction of HIV expression by endogenous cytokines”) are on the record for steadfastly contradicting or at least relativizing Trump’s numerous untenable statements about the pandemic, often immediately after the president stood down to leave the lectern for those very members of the taskforce to take. 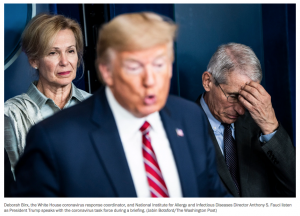 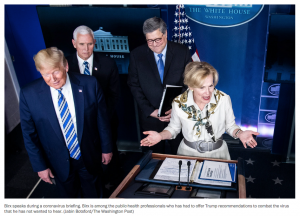 Two press photographs accompanying a March 24 article in the Washington Post depict this constellation precisely. They may be read as documents of the tension within the taskforce. The upper photograph reveals the utter consternation in Birx’ and Fauci’s faces as Trump delivers his statements, while in the photograph below it, Trump and his vice president Pence smirk as Birx addresses the media (Birx may have made a humorous remark, this needs to be checked).

Moreover, such photographs could be understood as visually illustrating and orchestrating the revival of “therapeutic nihilism,” a controversial doctrine or school of thought quite popular in the nineteenth and early twentieth century. Not a mainstream position again as yet, but the horrifying (and distorting) endorsement by the likes of Trump, Johnson, Bolsonaro, or Orbán, signal a recourse to “therapeutic nihilism” that could become one of the more dangerous trends of the discourse accompanying the Covid-19 crisis.

I came across the term the first time in a recent article in The Nation on Trump’s response to the pandemic, about his ruthless pitting of economy against health, financial against medical/virological reasoning; the article mentions the term in passing, although it hasn’t been used much (or not at all) in the public debate on the crisis up to now. But what exactly is “therapeutic nihilism”?

In the mid to late nineteenth century, medical professionals and scientists started to articulate doubt concerning popular therapeutic responses to larger epidemics and widespread diseases. The claim was made, for instance, that each individual should take advantage of the democratization of knowledge to treat her/himself medically. The poet and cultural critic Matthew Arnold wrote that “the stream of tendency of modern medical thought was toward a therapeutic nihilism,” a quote used approvingly in an 1888 article titled “Therapeutic Nihilism” where a certain Maurice D. Clarke collated arguments against “energetic” and “heroic” medication. At the outset he admitted possible misunderstandings of the term, “since it stands out in evident contrast to the general instinct of humanity, testified to no less by the domestic thoroughwort and saffron than by the munificent hospitals and dispensaries of a larger charity, to do something for the sick.” Pondering this medical question Clarke asks “whether to do something is necessary or not, whether it is wise or not, whether it may not be even harmful,” for “we all understand that it is expected of the physician, by common consent, to do something.” Expecting the doctor to be an active therapist, Clarke mused, is a “widespread sentiment of the laity,” shared among physicians. “The alleged nihilist in therapeutics antagonizes,” Clarke concludes, “therefore, a rooted prejudice, not alone in the world at large, of whom nothing else need be expected, but among his own class, who might be presumed to exercise an intelligent judgment.” 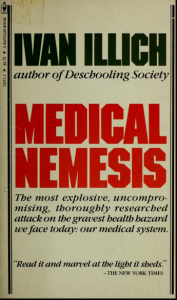 Several decades later therapeutic or “medical” nihilism found supporters in theorists such as the radical educationalist Ivan Illich, author of the influential Deschooling Society. In his controversial 1976 book Medical Nemesis, Illich claimed (as summarized by Paul Starr in an article titled “The Politics of Therapeutic Nihilism” of the same year), “that the great increase in life expectancy and public health experienced in his era was due to improved nutrition and sanitation, rather than innovation in drugs and medicines. He also believed there was an excess of physicians, surgeries and prescriptions. Therapeutic nihilists claimed such excess often led to malpractice and increase in iatrogenic (doctor-caused) injuries, accusing the physicians of creating even more illnesses.” Illich even made the counterintuitive and indefensible, if not outright cynical statement: “Less access to the present health system would, contrary to political rhetoric, benefit the poor.” More recently, philosopher of science Jacob Stegenga revisited the argument in his 2018 Medical Nihilism in which he argues that “if we consider the ubiquity of small effect sizes in medicine, the extent of misleading evidence in medical research, the thin theoretical basis of many interventions, and the malleability of empirical methods, and if we employ our best inductive framework, then our confidence in medical interventions ought to be low” (quoted from Oxford University Press’s description). 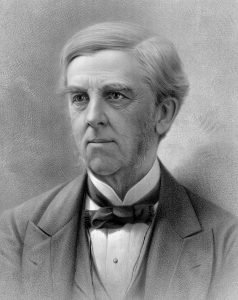 Interestingly, one of the most cited early proponents of therapeutic nihilism was also an early theorist of photography: Oliver Wendell Holmes (senior) (1809-1894) gained a polymath’s fame of being a doctor, inventor, physicist, poet, and photographer, who after returning from his studies in England to America in 1835 “quickly became the nation’s leading spokesman for this radical new doctrine, applying it very broadly not only to medicine but to the many other areas of his expanding interests” (Peter Gibian in the valuable 2001 Oliver Wendell Holmes and the Culture of Conversation). In his speech “Currents and Counter-Currents in Medical Science” (1860), which rose from discussion of the errors of “homeopaths, and quacks to a conclusion applied to the entire materia medica” (Gibian), Holmes claimed: “Presumptions are of vast importance in medicine, as in law. A man is presumed innocent until he is proved guilty. A medicine – that is, a noxious agent, like a blister, a seton, an emetic, or a cathartic – should always be presumed to be hurtful … If this presumption were established, and disease always assumed to be the innocent victim of circumstances, and not punishable by medicines, … we should not so frequently hear the remark … that, on the whole, more harm than good is done by medication … I firmly believe that if the whole materia medica, as now used, could be sunk to the bottom of the sea, it would be all the better for mankind, – and all the worse for the fishes.”

Holmes wasn’t a “nihilist” in the Nietzschean or any other commonly known sense of the term, neither did he represent a position of scientific denial in the interest of economic progress like those who try to gather legitimacy for their actions in someone like Holmes. Ground-breaking medical essays such as “Homeopathy and its Kindred Delusions” (1842) and “The Contagiousness of Puerperal Fever” (1843), “the latter of which anticipated the germ theory of disease by fifteen years” (Gibian), his contribution to the analysis of the problem of contagion and its advocacy of antisepsis as a solution, his introduction of microscopy and histology and the term “anaesthesia” in American medical study were no minor achievements in the field, and far from therapeutically “nihilist.” Holmes’ nihilism was rather a plea for “close empirical observation of individual patients, broad statistical study of patient communities, anatomical investigation, and laboratory research (and thus breaking the ground for the bacteriological/laboratory revolution of the next generation in medicine)” (Gibian), yet offering little in the way of positive cures or treatments for patients.

Otherwise, Holmes was fascinated with new technologies of vision (microscopes, telescopes, photographs), he invented the stereoscope, and, as mentioned earlier, wrote on the new optical devices, on photography and daguerrotypes, and famously so. To provide a short impression, taken from his enthusiastic (self-promoting) essay “The Stereoscope and the Stereograph” (1859):

“This triumph of human ingenuity is the most audacious, remote, improbable, incredible,—the one that would seem least likely to be regained, if all traces of it were lost, of all the discoveries man has made. It has become such an everyday matter with us, that we forget its miraculous nature, as we forget that of the sun itself, to which we owe the creations of our new art. Yet in all the prophecies of dreaming enthusiasts, in all the random guesses of the future conquests over matter, we do not remember any prediction of such an inconceivable wonder, as our neighbor round the corner, or the proprietor of the small house on wheels, standing on the village common, will furnish any of us for the most painfully slender remuneration. No Century of Inventions includes this among its possibilities. Nothing but the vision of a Laputan, who passed his days in extracting sunbeams out of cucumbers, Could have reached such a height of delirium as to rave about the time when a man should paint his miniature by looking at a blank tablet, and a multitudinous wilderness of forest foliage or an endless Babel of roofs and spires stamp itself, in a moment, so faithfully and so minutely, that one may creep over the surface of the picture with his microscope and find every leaf perfect, or read the letters of distant signs, and see what was the play at the ‘Variétés’ or the ‘Victoria,’ on the evening of the day when it was taken, just as he would sweep the real view with a spy-glass to explore all that it contains.”

Is there any reasonable connection imaginable between this mode of optical-empiricist enthusiasm  and the doctrine of therapeutic nihilism, particularly where the latter was matched, in the Malthusian nineteenth century, with “administrative nihilism” (based on a theory of radically lessened statism)? (Well, probably not, although someone like Holmes may have been able to draw the connection.) Anyways, together they worked, explains historian of science Emmanuel d’Hombres, from the shared belief “that the norms of activity are intrinsically linked to the structure of the (biological or social) body. Just as there is a vis medicatrix naturae in the individual organism, which renders any intervention of the therapist vain, there would be a vis medicatrix rei publicae (Malthus) in the social body, which makes the intervention of the legislator in economic life pointless and even dangerous.” After decades of failing medical therapy, diagnostic optimism had turned into diagnostic pessimism in the later nineteenth century – complementing the call to retreat from administrative regulation in the sphere of political government. Rather than intervening medically in the individual patient or diseased parts of the population, these bodies at risk were summoned to discover their respective medicatrix naturae. Instead of therapeutic nihilism it might as well be called, borrowing from Lauren Berlant, cruel optimism.

Beneath the current debates and statements about the “costs” of lockdowns and social distancing, beneath Trumpian disengagement from medical cure (in his attempt to decouple the health catastrophe of the pandemic from the “problem” of ecomomic repression and de-growth), there lurks the most vicious vision/version of “therapeutic nihilism.” TH