This weekend, news of the approximately 65 Cuban doctors, nurses and technicians that arrived in Milan to aid the Italian health system’s struggle against the coronavirus was accompanied by photographs (here a sample from the Reuters website) of a group of the medics about to depart for Europe. They are posing in the shot, grouped around a photo-portrait of Fidel Castro some holding (almost) caressing it between them. They are honouring the máximo líder’s legacy and waving tiny Cuban and Italian paper flags – gesturing a brand of friendship among nations long since believed part of the long gone era of Cold War internationalism. But Cuba’s “medical internationalism” (John M. Kirk/H. Michael Erisman) has continued from the 1959 revolution to the present day. Prior to sending medical personnel to Italy, over the past few weeks, Cuba has dispatched doctors and nurses to Venezuela, Nicaragua, Suriname, Jamaica, and Grenada to give aid in the midst of the current crisis.

The number of Cuban medical personnel is estimated to count over 38,000 in over 60 countries, with more then 20 per cent of Cuba’s doctors working overseas. As Gail Harley writes in 2017, “Cuba (population 11.4 million) has more medical personnel working abroad than the World Health Organization and the G7 countries combined. In addition, Cuba has the largest medical school in the world – the Latin America School of Medicine (ELAM) founded in 1999 – which has over 8,000 students enrolled, the vast majority from developing nations. The school also operates positive discrimination towards families with limited means and towards disadvantaged communities such as the black and indigenous communities of Central and South America.” 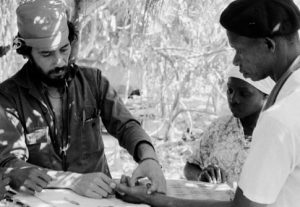 The images of the Cuban coronavirus crisis delegations extend the iconography of Cuban doctors engaged in aiding anticolonial struggles around the world in the 1960s and 1970s. Castro’s militant internationalism has since been updated to considerable effect. With China and Russia (and Germany and others), joining the medical aid campaign for Italy, the pandemic becomes the stage for a revival of a long forgotten, albeit desperately needed internationalism. TH